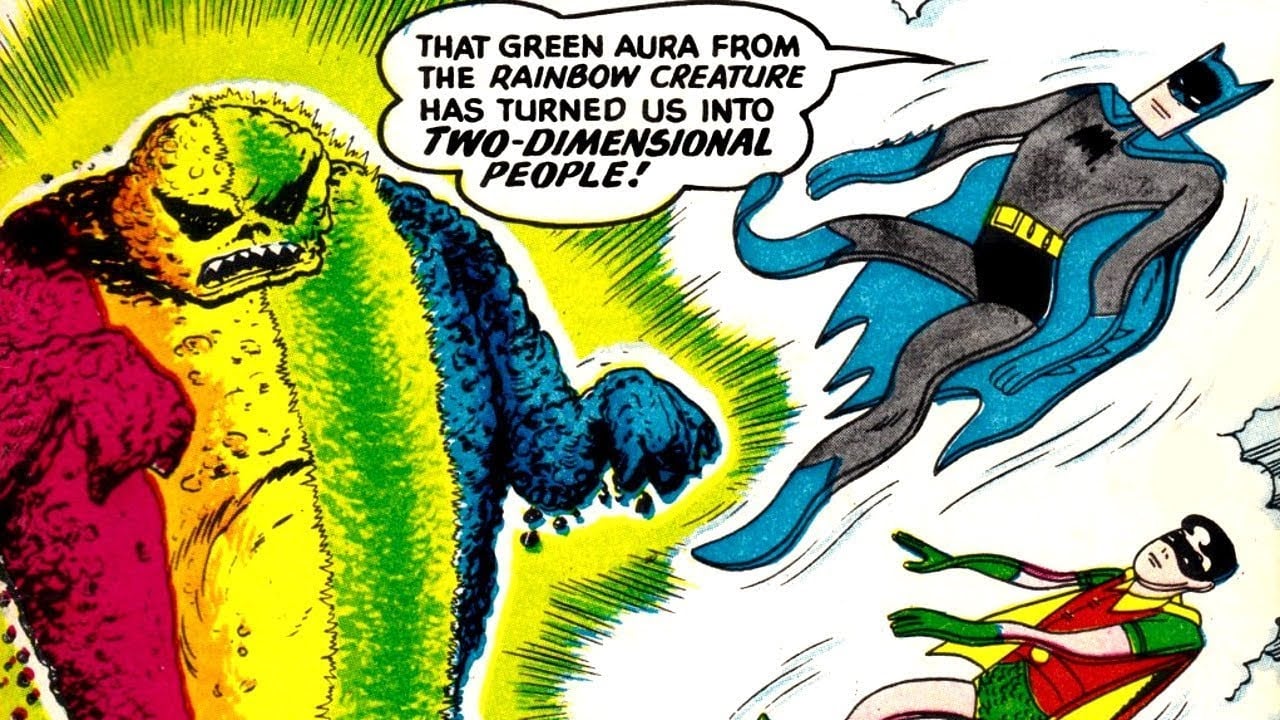 In 1960 Bill Finger wrote a Batman story involving a South American rebel group releasing a mysterious “Rainbow Creature” composed of red, green, yellow, and blue on an unsuspecting rural village. Each color holds a power, when a power is used the associated color fades to white. Batman and Robin eventually devise a plan to make it use all its powers simultaneously. It works, and the creature fades entirely white. Then, before The Dynamic Duo can strike, it implodes into dust and blows away in the wind. This was Batman #134. And though the issue was released in 1960, it is the pinnacle of the 1950s Batman: bright, whimsical, otherworldly, and downright bizarre. Did this tone stem from post-War censorship and economic realities, or something else?

The eras of The Batman are many. Even now, as I’m writing this or you are reading it somewhere in time, the character is ever changing: a new Batsymbol debuts in his self-titled book, new histories are being meticulously outlined by the next great writer of The Bat. However, since Batman is (arguably) the American comic book personified, the character’s eras are commonly shoehorned alongside the major eras of comics. Golden Age Batman prowls through industrial cityscapes. Silver Age Batman leaps to action from the rooftops. Bronze Age Batman haunts the moonlit skies. And Modern Age Batman sulks in the shadows, waiting to pounce. These eras were and are malleable though, and cramming more than 80 years of history into four versions of the character feels simplistic and wholly uninteresting.

The Golden Age is said to have begun with Superman famously hoisting that green car over his head on the cover of Action Comics #1 in 1938, running through the 40s to the year 1950. The Silver Age supposedly begins in 1956 with The Flash appearing on the cover for DC’s Showcase #4. I would argue it begins closer to 1960, perhaps in 1961 with that amazing Jack Kirby cover of Fantastic Four #1. Regardless we’re looking at about a 6 to 10-year gap. A fairly significant amount of time.

Like most of his fictional peers, Batman started the 50s on solid footing. His influence on the industry remained strong, both artistically and commercially. He was relevant, even if some of his stories began to feel like pulp rehashes, his visual depictions perhaps losing some bite. That being said, some classics did come out of those years, particularly 1951’s “The Man Behind The Red Hood”. And some of Batman’s most iconic villains like Catwoman and Two-Face were depicted wonderfully. Batman and comic books at large were plodding along nicely and circulation peaked in 1952.

It’s impossible to talk about comics in the 50s without mentioning a book called The Seduction of the Innocent. The writer’s name didn’t matter, it still doesn’t. His work, however, was seductive enough to illicit fear from both America’s post-War parents (mostly suburbanites) and its post-War congress. Subtitled “the influence of comic books on today’s youth”, the book painted comics as promotional of violence, depravity, and general delinquency. It stated unequivocally that comic books were the dredge of popular culture. Soon a congressional inquiry to the art form commenced. Knowing regulation would follow, the major comic book publishers voluntarily created the Comics Code Authority. Those belonging to it would submit comics for review. If the CCA found the title in compliance with the Code, it endorsed the title with a stamp in the upper right corner of the cover. For comics like Batman and others still closely tied to their pulp origins, this was a problem.

The CCA outright destroyed horror comics. It banned “walking dead, torture, vampires and vampirism, ghouls, cannibalism, and werewolfism”. Seemingly unconnected to The Batman… but one of the character’s first major foils was one Doctor Death. And soon after he appeared in “Batman Versus The Vampire”. It also heavily regulated crime, criminals, and even the justice system itself. Authority figures could not be depicted as anything but virtuous. Empathy could not be so much as hinted at any criminal… their crimes “sordid”, and never going unpunished. From a storytelling standpoint, this put the writers of Batman (still almost exclusively Bill Finger) in a tight spot. Batman’s horror/black magic ties were severed, his restrictions on crime itself so carefully construed even “Frenchy Blake’s Jewel Gang” would have pushed the limits of the CCA. So what was one to do with the character and his world?

The first self-titled Batman comic stamped with the CCA’s approval was Batman #90 “The Web of Doom”. It sounds dark (I guess?) but it involved a research scientist hitting his head and misplacing a package containing a virus. Crime and criminals appear, but they are mere subjects to jog the scientist’s memory. Needless to say, it just didn’t work. Within a few years, DC (National, it was called at the time) introduced Ace The Bat-Hound in Batman and Kathy Kane’s Batwoman in the pages of Detective Comics. As the decade hit its latter half, Finger and his team reached even further for material, all the way up to the stars and beyond. Soon Batman and Robin were meddling in the affairs of aliens, traveling between dimensions, and encountering magical elves. Did concepts like the Batdog evolve into 1959’s “The Interplanetary Batman” simply due to the CCA’s regulation of Batman’s storied horror and criminal past, or were there other things at play?

To understand Batman of any era is to understand America of any era. Post-War America was a bit like Seurat’s “A Sunday Afternoon on the Island of La Grande Jatte”: from far away peaceful and still, but the closer you get the further apart the figures become, eventually breaking into unconnected single points. America had won the War. She emerged as the virtuous savior of the free world. By the 50s the money was good, societal values were strong, and she was that “shining example on the hill”. But take a few steps closer. Peacetime was a lie; America was entangled in the first of many costly and stubborn foreign military campaigns in Korea. The decade ushered in a new, unspoken era of paranoia with McCarthyism, the new role of gender, veteran alienation, and urban/suburban schism. All the while the economy and technology grew exponentially; disposable income soared. The 50s were a weird, unprecedented time.

The CCA pushed Batman away from his pulp and horror origins. But why was The Caped Crusader pushed to the realm of alternate dimensions, interstellar travel, and other far-fetched “high concepts”? The influences on the late 50s Batman were likely subconscious, like many things were in late 1950s America. But perhaps not. Perhaps the late great creators of Batman at the time, and the National/DC editorial staff, knew exactly what they were doing. Regardless, I believe the bizarre tales of the era came to be due to: escapism (from the era of unspoken paranoia), the dawn of the Space Race, and the counter-culture movement.

The Soviet Union claimed they were going to launch their first satellite “in the near future” in August, 1955. What really kicked off the space race was when it actually happened… the 1957 launch of the first Sputnik. Soon Eisenhower ordered the United States civilian rocket and satellite program to move up its timetable and first launch. The general public was enthralled. The stars, the moon, and beyond were within reach, and anything felt possible. Is it a coincidence that issues of Batman and Dectective Comics involving space debuted after the launch of Sputnik and the US’ retaliatory Explorer 1? It didn’t take long either. Within a month of Explorer’s launch off Cape Canaveral Batman #113 hits stands. The issue featured a story titled “Batman – The Superman of Planet X”. Those familiar with Grant Morrison’s acclaimed Batman opus would recognize The Batman of Zur-En-Arrh, here making his first appearance in his crazy red and purple Batsuit. The alien Batman gives Earth’s Batman the “Bat-Radia” as a parting gift, a device oozing 1950s space-age nostalgia.

Batman was literally teleported off Earth for his adventure to Zur-En-Arrh, and he would be time and time again in the coming years. When he wasn’t leaving our atmosphere, he was often being transported to different planes, societies, or molecular levels. Take “Batman In A Bottle”, where Batman and Robin are sent to a prehistoric past to investigate the ancient Zoto civilization. Or “The Winged Bat-People”, where the Duo hits Mach 10 in the Batplane and are flung into another dimension featuring natives in a feud with well… winged bat-people. There isn’t anything subtle about it. Escapism was probably the most consistent facet of this era of Batman. A fascinating piece of his story, considering his (generally) grounded, non-superpowered sensibilities.

As the 1950s progressed the underside of the culture began to seep to the surface, perhaps inevitably. This underside formed a foundation for the more infamous counter-culture of the late 1960s. It was liberating, experimental, and way out in left field. Now… Allen Ginsberg and Bill Finger weren’t hanging out in back alleys together in Greenwich Village, I realize that. But consider this: Ginsberg and some of his peers went through obscenity/censorship hearings eerily similar to the congressional hearings on comic books and the resulting Comics Code Authority. These transpired within a year or two of one another. The content of Ginsberg, Burroughs, and Kerouac’s work obviously did not match the content of late 50s Batman but stylistically there are many parallels. Some tenants of the Beat Generation were liberation from censorship, ecological consciousness, idiosyncrasy, a respect for indigenous peoples. These all – in some form or another – appear in the post-CCA Batman. The stories of this counter-culture were modern and surreal, as was 1950s Batman.

The Batman of the later era had become something of a joke in a post-Frank Miller world. But if Morrison’s acclaimed Batman run has taught us anything, it’s that these stories and concepts can be mined in new and exciting ways, and they’re an important piece of The Batman story. Like the American era he spawned in, the 1950s Batman is odd and wholly unique. Where else in Batman’s history does a cover feature a word balloon such as: “the green aura of the rainbow creature has turned us into two-dimensional people (!)”? That alone is worth the trip.

Tim Burton or Christopher Nolan, Who Did Batman Better?