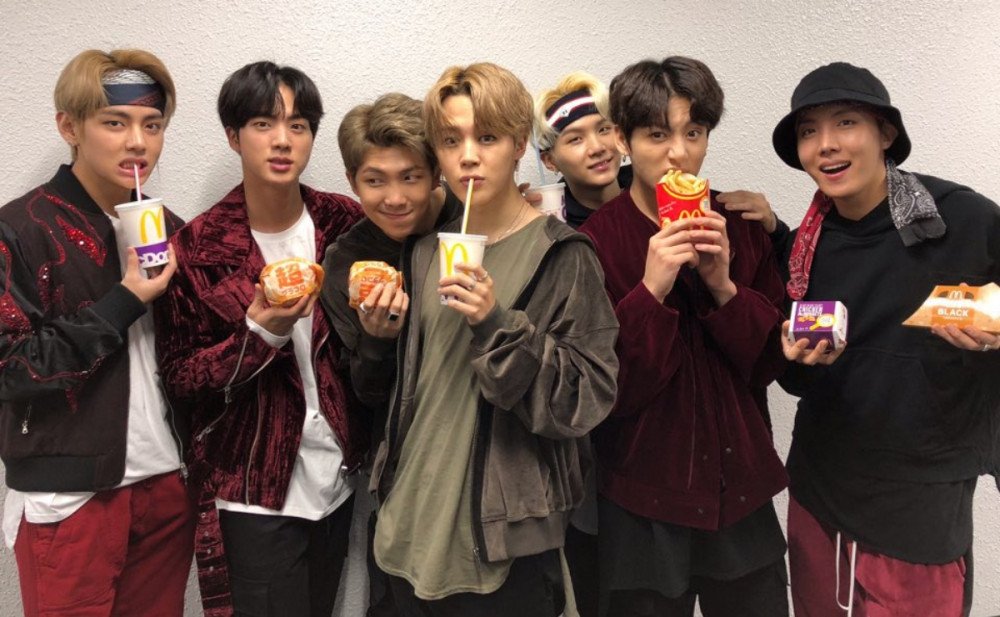 Well, I was expecting to write an article about yet another broken record or jaw-dropping achievement from Korean music sensations BTS this week but instead, we got the news that the band is teaming up with the world’s most famous fast-food restaurant because, why not I guess? McDonalds and BTS are collaborating to bring The BTS Meal to restaurants in around fifty countries across the globe in May and through to June. The BTS Meal will be made up of the band’s go-to order and its actually pretty simple: A ten-piece box of McNuggets, medium fries, a medium coke, and Korean-inspired Cajun and Sweet Chili dipping sauces. No Big Mac? Kind of sus but okay. As is to be expected, BTS’s fan base- the ARMY- has been having a lot of fun with this announcement. Here are a few tweets that caught my eye following the announcement of The BTS Meal.

Let’s start with the most wholesome Tweet that truly restored my faith in humanity. @userbfly tweeted out a campaign that will focus on donating to homeless shelters and other charity organizations once The BTS Meal comes out in McDonalds across the world. Even if you’re from a country that isn’t participating in the partnership (where my fellow depressed UK ARMYs at?) you can still make a donation. This is what I absolutely love about being part of BTS’s ARMY. There is a strong sense of camaraderie which makes it so much easier for us to come together for a greater, charitable cause such as this. I have been consistently shocked by the generosity of the ARMY since becoming a member and I think this immediate response to the BTS and McDonald’s collab is a great example. If you’re interested in taking part in this campaign, the Tweet has a link to the form to fill out. Thank you for this @userbfly!

For anyone who isn’t aware, John Cena is ARMY. That is right. We have John Cena. Come at us, I dare you. Thank you for making me almost choke on my drink with this one @babyratplushie.

So photo cards with The BTS Meal haven’t been officially confirmed yet but it’s a no-brainer to include them with this partnership. @junesona’s Tweet is basically all of us starting our new jobs at McDonalds and trying to steal our bias’s photo cards before the manager spots us. Whilst @junesona is all about Namjoon (that’s RM), I’d be stuffing Jin photo cards into every available crevice. That came out weirder than I intended, my apologies.

That being said, we are all going to be as just depressed as Rick, Carl, and the McDonalds cashier if it turns out that the photocards are not a thing. Props to @txtidol for this.

That kid better give me that Yoongi card like right now or I’m about to square up. Shoutout to @jmsctrl for this.

@hobichuus saw the opportunity to make this pun and they took it. I have to say bravo to you. If you know BTS’s song Mic Drop then I’m sure you will be equally jealous that you didn’t think of this joke first.

There is surely going to be some BTS merchandise becoming available with this partnership. This Tweet from @AureliaOT7 shows what was up for the grabs with the Travis Scott and J Balvin McDonalds collaborations. There is a heck of a lot of stuff, so hopefully, BTS will get some awesome bits and pieces too.

You just know that everyone is going to be eating those fries and nuggets like they were handcrafted by BTS themselves. @hourlyseokseok hits the nail on the head with this one.

Because there is no better way to make friends then by bonding over BTS at McDonalds. Thanks for this one @jeonlvr.

Park Jimin is here to take your order thanks to @MinYoonBri.

Putting in a bit of thought for the McDonalds employees with this next Tweet from @leminhunny.

Last but not least, the official TikTok for McDonalds posted a little clip of the boys singing the classic ba-da-ba-ba-ba tune. Their golden vocals work so well with those golden arches. Now release a full single of it.

I do find these McDonalds celebrity partnerships kind of odd and even though I love BTS, this is no exception. I just wish that they had maybe brought a new food item to the menu or something. It’s literally just chicken nuggets, dip, fries, and coke. Not even an apple pie was thrown in for good measure! Not that it really matters to me anyway as my country has once again been excluded from the proceedings. This isn’t the first time that the UK- or Europe in general- has lost out on BTS but it just feels slightly harsh. There are fifty countries taking part in the campaign across various continents but we aren’t the only ones who are going without BTS in our junk food. Other countries such as Germany, Spain, and Egypt don’t get The BTS Meal either. It’s okay fellow outcasts, we will get through this difficult time together.

Check out the image below to see exactly what countries are participating in the BTS Meal and what dates they will become available.

Butter Me Up: BTS Announce Their Second English Language Song- “Butter”- Coming in May

The Voice-Controlled, Self-Transforming Optimus Prime is An 80’s and 90’s Kids Dream