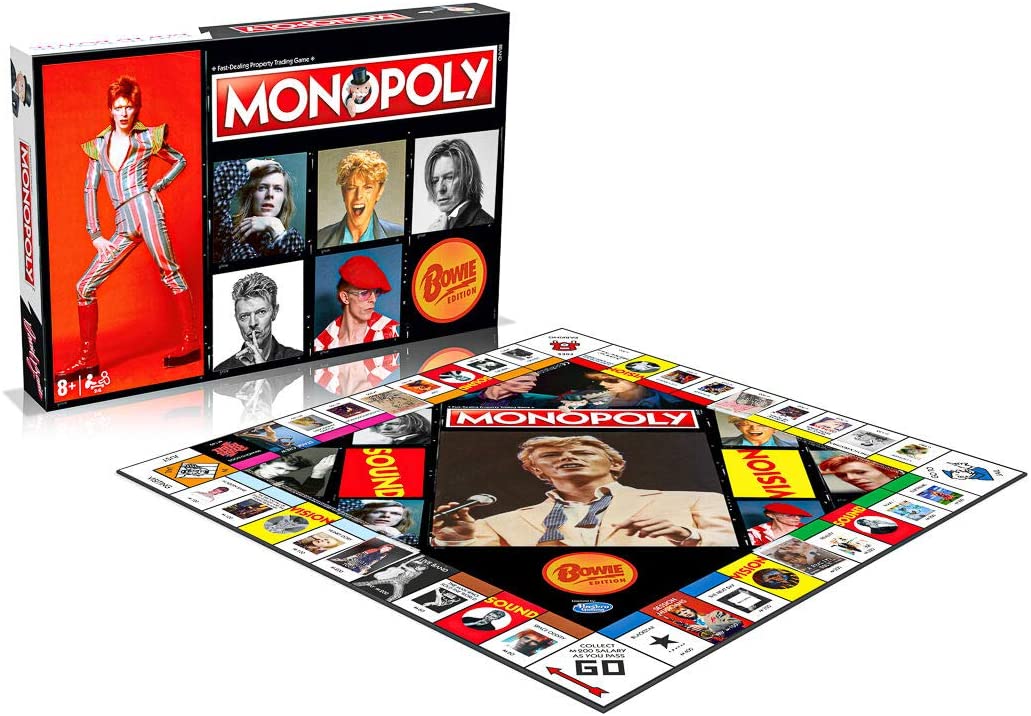 We all know the legendary musician that is the late and great David Bowie. He could bring a wonderful burst of glamour and eccentricity to anything that he was involved in, but this doesn’t stop with his iconic music. Bowie now has his very own edition of Monopoly, joining the likes of Queen, Elvis and The Beatles who also have their own versions of the well-known board game that has been breaking up friendships and destroying families for decades.

In Bowie’s version of the game, the player tours the superstars various albums- such as Reality and Black Star– and the player tokens such as the top hat, the car and the dog are replaced with Bowie themed items like a lightning bolt, a star and a skull. Check out the description of the Bowie Monopoly from the David Bowie News website below, which I really wanted to include because I absolutely love the ridiculous amount of David Bowie song puns. This is the kind of content I want in my life.

Ashes to Ashes, funk to funky; David Bowie comes to Monopoly. Relive the life and works of one of the most innovative, influential and highly-regarded musicians of all time as you buy up the albums of the Thin White Duke himself, and charge other players rent for landing on them. It Ain’t Easy, but if you Hang On To Yourself you might just be able to buy up every space, build stages and stadiums to charge extra rent and bankrupt your fellow Kooks – then Fill Your Heart with all the cash you rake in. Just don’t stop to Moonage Daydream or you might find yourself left with nothing but Stardust. Pick up Sound and Vision cards to make some Changes to the economy; win some bonus cash and you’ll be Dancing In The Street. But lay down all your cash on session musicians and live band fees, and Janine may as well take her axe to you. With custom Bowie tokens, reimagined Monopoly spaces, bespoke pieces and Bowie-themed Monopoly money, there’s a Velvet Goldmine to be unearthed within. So what are you waiting for? Let’s Dance!

The David Bowie Edition of Monopoly is available now on Amazon US as well as Amazon UK.

Sad About Daft Punk’s Separation? Can I Offer You A Nice Meme in This Trying Time?