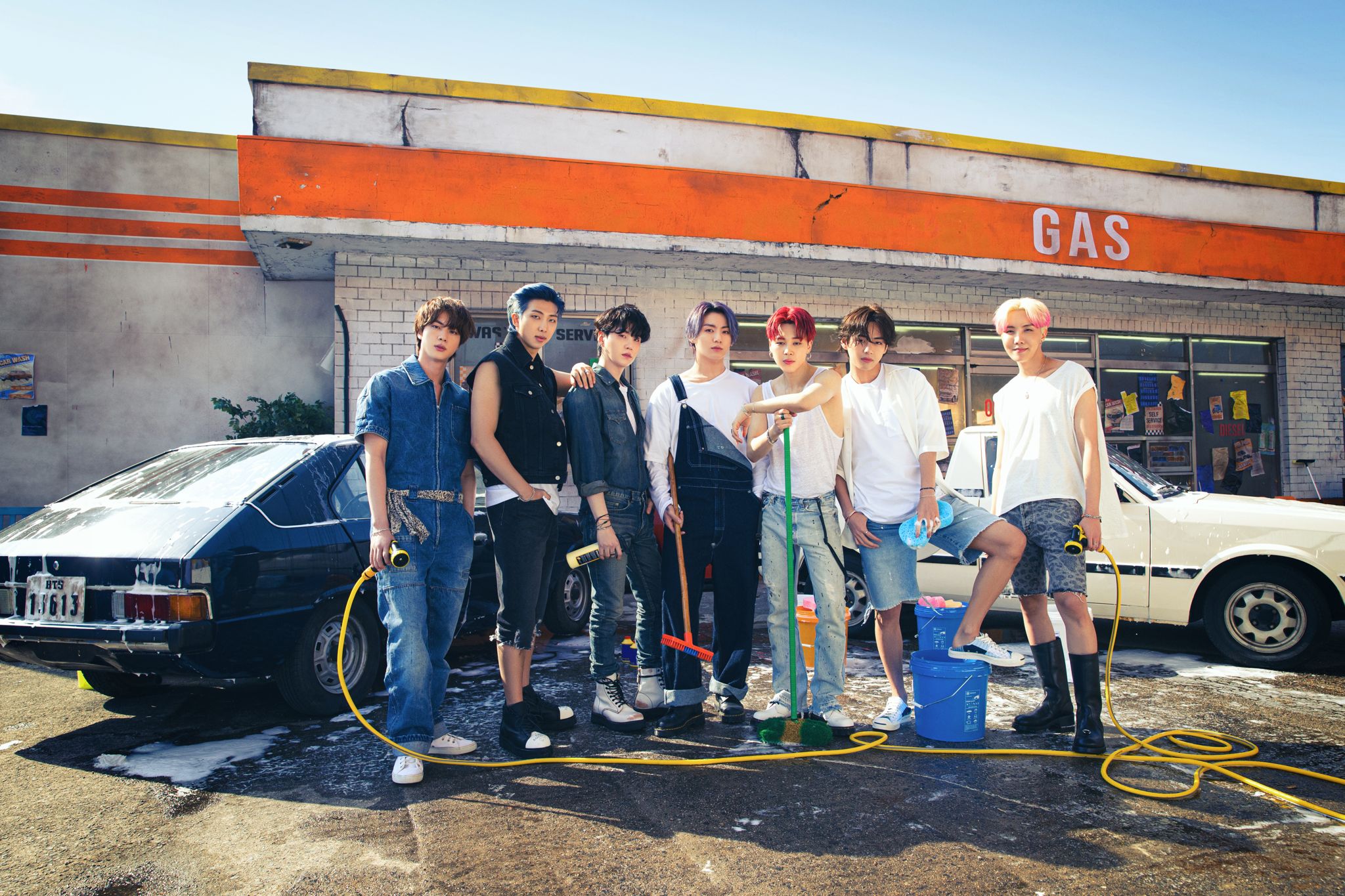 Gender is a tricky subject to navigate at the best of times, so it’s needless to say that I was more than a little hesitant to go into this topic here on the blog. That being said, I feel that the photoshoot I’m going to talk about is a significant example of the rejection of certain gender stereotypes. The fact that this was done by one of the biggest bands in the world right now- with an insane amount of influence- makes it all the more important as these are people who can truly make an impactful difference thanks to their following. So please don’t verbally crucify me if you disagree with my points. Feel free to share your own opinions. Debate is healthy, after all!

BTS have recently revealed three separate photoshoots that they did to celebrate the upcoming physical CD release of their hit summer song “Butter” (which will also include a new song called “Permission to Dance” co-written by Ed Sheeran). One of these photoshoots had a gas station theme, showing the group washing cars, getting soapy, posing with hoses and sponges whilst wearing copious amounts of denim. I will post the whole photoshoot below but a small disclaimer for you; they may make you feel things you thought you were incapable of feeling. Consider yourself warned. Whilst this may seem like just another photoshoot for the group, to me, it feels like a huge step when it comes to breaking down certain gender stereotypes.

The sexy lady washing cars in a skimpy outfit image is nothing new in the media. Let’s be real here; we have all seen it before. It’s an image that has been seen in movies, television, music videos, and more. The combination of attractive women and cool cars appeals perfectly to yet another gender stereotype: that of the “super macho man.” Big cars and hot women make for the perfect fantasy for this “macho man,” so why not put them together for marketing purposes? It’s such a well-known image that it has been parodied multiple times too, such as in Pink’s music video for the song “Stupid Girls” -where the singer dramatically sprawls herself over a car to depict the stereotype of the “stupid girl”- and The Simpsons and Family Guy crossover episode -which had chubby cartoon dads Homer Simpson and Peter Griffin donning short shorts and sponges to wash some cars. It could be argued that the car washing lady stereotype isn’t harmful in that it is just the epitome of perfection in the eyes of the “alpha male” stereotype. However, I would argue that this is exactly why it is quite harmful, objectifying women to the extent that they are portrayed merely as things to be ogled and fawned over. A luxury item, just like that sports car she is diligently washing. You can throw in the stereotype of women being the ones doing the cleaning into this image too. I think that this is why BTS’s photoshoot is so impactful. It completely turns this image on its head, with the seven men being the ones to take on the role of the sexy car scrubbers.

BTS have often had the phrase “girly” thrown their way in the media in pretty much every way, from their image to their voices, their appearances, and more. There are often negative connotations associated with this term, particularly when directed towards men. A great example of the use of this comes from a personal experience I had at work. I work in a hospital and have a BTS lanyard, and when one of the healthcare assistants noticed it, she started looking into them on her phone. As soon as she brought up a picture of the band, the first thing she said was exactly that: “girly.” Even my mother- a big BTS fan and ARMY- was quick to point out which members she thought looked more masculine and looked more feminine when I showed her this photoshoot. It is a hard label for the group to escape from. This is another stereotype in itself- that of the feminine male- that is forced upon BTS due to who they are as a band and as people, not only because of elements of themselves that they have decided upon- such as their individual styles and fashion choices- but also because of what they look like which is- obviously- out of their control. The band are one of the most successful artists in the world right now, so their critics tend to be drowned out by their fans and by their achievements. However, this isn’t anything new. BTS have constantly been compared to women throughout their eight-year-long career- particularly in the west- but they never acted like this comparison was seen as a negative. Even as young artists who may have received more fans by pandering to that “macho man” stereotype, they didn’t change who they were. This recent promotion for “Butter” has shown that not much has changed in that aspect, as the boy band defy that aforementioned “sexy woman washing a car stereotype” by holding a whole promotional photoshoot centered around that theme.

It can be argued that my even calling attention to these various gender stereotypes is in itself a counterproductive step towards the optimistic goal of one day making these stereotypes obsolete. I think Knuckles from the Sonic Boom-the Sonic the Hedgehog animated series- explains it best in a clip that I will link here. Yes, I said Knuckles from Sonic the Hedgehog. Just watch it, and you will see what I mean.  But I think that the inspiration the band has on people of all ages worldwide is an important enough element to justify this article’s existence. BTS continues to not only obliterate gender stereotypes but also encourage people to be themselves no matter what the cost. There are so many out there who are afraid to be themselves as they live in fear of being mocked, ridiculed, and made to feel inferior but BTS’s open-minded nature in every sense is highly like to have affected many people. I’m definitely one of those people. I have always been paranoid about my weight, making it hard for me to express my true self without feeling extremely self-conscious. Since becoming a BTS fan, I have started wearing more of what I actually want to wear rather than big, bulky clothes to hide in. I started wearing jewelry -including ear cuffs and rings- which I was previously scared of wearing for fear that I could not pull them off. If they did this for someone like me, imagine the effect they may have had on those struggling with their gender or sexuality thanks to their message of self-love and belief? This photoshoot perfectly encapsulates their natural ability to break stereotypes and conventions, all whilst holding up a metaphorical middle finger to those who say that men shouldn’t be wearing makeup or dressing the way they do. Let’s be honest; they’re probably just jealous that they could never look that good anyway. Make sure to check out the rest of the photoshoot below, and the physical copy of “Butter”- alongside “Permission to Dance”- will be released on July 9th, 2021.

All Images Courtesy of BigHit/HYBE

Family Forever: A Look at Some of The Best Vin Diesel/Family Memes Inspired by F9

The Space Jam: A New Legacy Marketing Is a Perfect Example of Hollywood’s Dismissive Attitude towards Professional Voice Actors