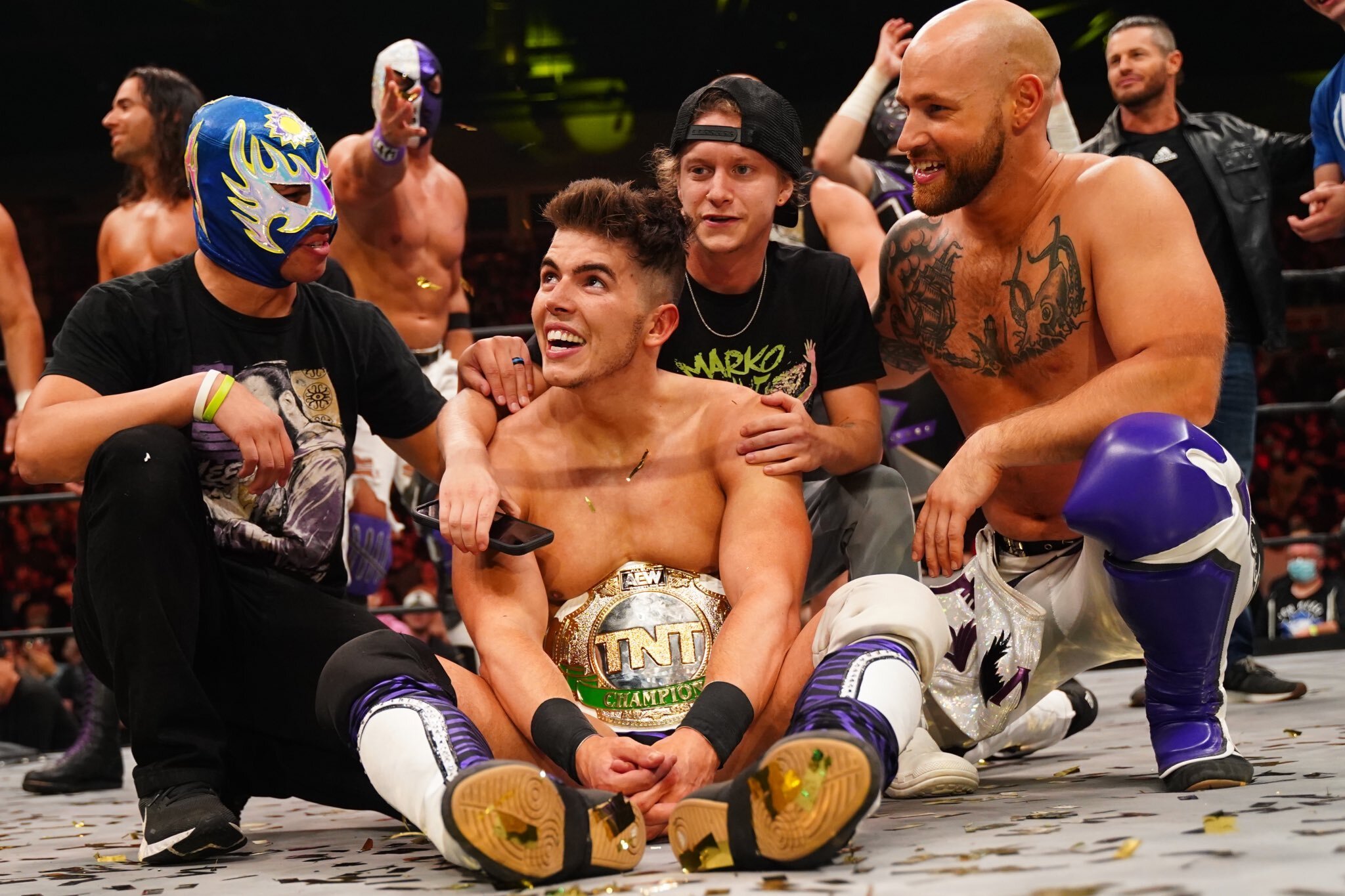 Miro vs Guevara: An Unexpected Twist

AEW Dynamite on Wednesday the 29th of September, 2021, involved a TNT Championship match between champion Miro and challenger Sammy Guevara. An episode of Dynamite hardly felt like the place for a sudden loss for AEW’s most dominant champion, but considering the occasion coincided with the tribute to Brodie Lee, the TNT Championship switch became much more significant.

So, the TNT title is now in the hands of Sammy Guevara. While the question of where Sammy and Miro may go from here will of course be the obvious point of contention, there is one further point that may be even more salient: Sammy Guevara’s first title reign is a statement of intent for AEW. Let’s find out why.

#AEW Exclusive Moments after capturing the @AEWonTNT Championship from @ToBeMiro on #AEWDynamite LIVE from Rochester, New York home of the greatest TNT Champion ever #MrBrodieLee, our camera crew caught up with the *NEW* Champion @sammyguevara. pic.twitter.com/iIaPvYquFJ

Let’s quickly go over the match.

After the multiple batterings of Fuego Del Sol, Sammy Guevara stepped forward to take on the man who is 97% shoulder muscle, Miro.  The bout started as you’d expect, as it does with every Miro match, dominance. Guevara was thrown around for what felt like an hour, with each attempt at a comeback being swiftly dispatched. A late-match Spanish Fly out of the blue turned the tide as Guevara was able to hit a flurry of offense. A Tornado DDT and 630 Senton later and we have a new champion.

The match wasn’t spectacular, but the last few minutes were undeniably exciting. Considering AEW’s tendency to have longer reigns, it was unexpected for Miro to lose so soon into his run, even if that run was the second-longest in the title’s history. It just felt like Miro was going to hold onto it forever.

Sammy Guevara’s win proved to be a crowd-pleasing moment on a night dedicated to the memory of the late Brodie Lee. Especially poignant too, considering that the TNT Championship was the title Brodie held in AEW.

Was This A Good Idea?

That’s the question. Straight after the pinfall, I was excited, an hour later I was convinced it was a terrible idea and that it was a shame to end Miro’s current hot streak, and while writing this very piece, my mind has switched again.

AEW has taken a lot of flack for two things: one, hiring a load of ex-WWE guys -a gripe that doesn’t make any sense if you think about it for more than a moment- and, two, having a roster too bloated to fit everyone in. So, that’s why Sammy Guevara holding the TNT title is perfect. We worried that the recent arrivals would stunt the progress of AEW’s originals, but this move puts that fear to rest. Remember, Guevara was part of the first-ever match in Dynamite history. Him winning a title just as Danielson, Cole, and Punk arrive is a statement of intent. Yes, Miro was great with the strap, but he can now move up into the World title scene.

Also, I previously said how the TNT Championship is AEW’s best title because it has provided the most variety and variety is what AEW does best. The one thing that we were missing from the belt’s lineage was a flippy cruiserweight. Well, now look at what we have. So yes, it may not have seemed it at first, but Guevara with the title is a good idea, just so long as they keep pushing Miro.

So Where Do We Go From Here?

Well, as stated, Miro should progress into the World title scene. Not necessarily winning it, but he’d prove invaluable as a monster heel chasing the belt. Of course, Omega isn’t an ideal target for that sort of thing. Heel vs heel title feuds can work if booked right, but they’re rare for a reason. Hopefully in the not too distant future, when everyone is ready, we’ll see the return of Hangman Page to take that belt off of Omega. That’s when Miro will be ideal.

For Sammy Guevara, it’s hard to say. What storyline is there to tell? Maybe MJF? He’s recently referenced Guevara as one of the four pillars of AEW: MJF, Guevara, Jungle Boy, and Darby Allin. A four-way feud surrounding the TNT Championship would be an absolute delight. Even if it was the case of each of the four holding the belt once every few months while continuing the multi-man feud.  It feels time to really tell a story with the TNT Championship. This could be that story. It would also show AEW’s commitment to the people that helped shape the company.