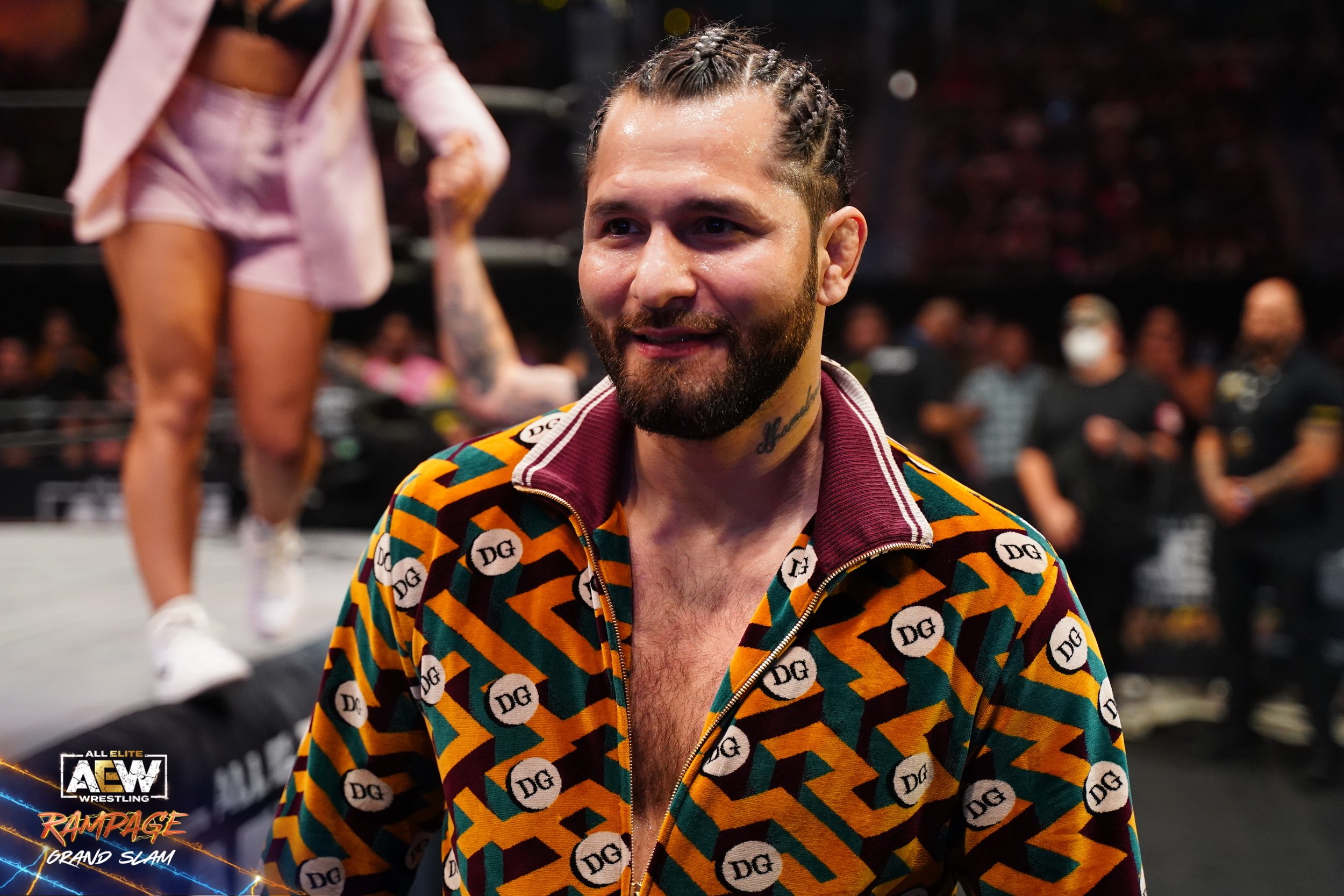 Night two of AEW’s Grand Slam special, this time on Friday night Rampage. The big news is, of course, CM Punk’s first TV match after returning which, let’s admit, is a pretty weak milestone in comparison to his debut at All Out. We also had a simply ludicrous amount of tag matches.

So, considering that night one, Dynamite: Grand Slam, was an enjoyable evening of rasslin’, let’s see if night two of Rampage Grand Slam can one-up it.

Punk’s first TV match after his extended hiatus and it was against quite a surprising opponent in ‘Powerhouse’ Hobbs. Hobbs isn’t exactly known as a prime worker, especially in comparison to the quality in AEW, but we all went into this one open-minded. Punk’s first match back against Darby Allin was, let’s say, “clunky” -review found here. Unfortunately, Punk vs Hobbs was even worse.

Now, I’m not saying it was bad, finer, but considering that Punk doesn’t feel all the way back after the last match with Darby, Hobbs was a strange choice. Surely Starks would have been better suited, though that one is sure to follow.

So, the match was a bit clumsy and it didn’t seem to flow. Transitions and counters weren’t very fluid and there wasn’t much of a story being told. It’s not one anyone will be rushing back to watch any time soon, but as it’s Punk’s first TV match back, it will be memorable for no other reason than that.

A great match as you’d expect. As much as I dislike the Young Bucks, they don’t often have a bad day on the job. Surprisingly, most of the fast-paced offense came from Jungle Boy and Luchasaurus. Considering Adam Cole was involved, you’d have expected this to be quite one-sided. However, there did seem to be a reason for it. The story told in this bout was very much about Cole and Jungle Boy. They’ve been sowing the seeds of a potential rivalry ever since Cole’s debut at All Out where the first thing he did was attack Jungle Boy. This match had multiple story beats like Cole rolling out instead of facing Jungle Boy and their multiple face-offs. Later in the night, the match was set for the following Dynamite.

The match was as much of a spot fest as you’d imagine it to be. Most of the action was focused around Jungle Boy cleverly reversing multiple two-on-one situations which got the crowd very much invested.

There was one irritating moment. It was a repeat of the worst cliché in wrestling. I’m talking about the spot where Jungle Boy has his submission locked in, only to abandon it when Gallows jumped up on the apron. He wasn’t even in the match. Obviously, JB got attacked from behind and looked like an idiot for doing so.

A fun tag match that accomplished what it wanted to.

Chris Jericho & Jake Hager vs Men of the Year

Sure, the story going in didn’t make much sense. Aging veteran Jericho and MMA trained Hager aren’t exactly the short, flippy twinks that Dan Lambert keeps banging on about, but maybe that’s the point? Are they defending AEW’s honour? I may have missed that bit if so, but I digress.

This particular bout was not about the match itself, more the events afterward. The action was perfectly fine for what it was, but it was the post-match arrival of various fighters from American Top Team that got everyone excited, I assume. I’m sure that anyone, like me, that hasn’t got a clue about this sort of thing was left baffled and a bit bored by the whole affair. #KeepFakeFightingOutOfMyRealRasslin

That was a joke by the way.

That’s three in a row for tag-team wrestling. FTR must’ve been salivating backstage.

Was anyone else thinking that we’ve already seen this match? You know, about twenty minutes before? A multi-man spot fest. It was basically the same thing as the SuperKliq match, but with one more person on each team. It’s not even like this is the last tag match of the night.

Take all of the compliments of the previous match, only have it be a bit less interesting as the HFO aren’t as over as the SuperKliq. The story arc was a bit different too as it was more telling the tale of the connection between the two face teams than the opposing ones, likely leading to a similar outcome down the line, however. There was also the ongoing hair vs hair plot between Orange Cassidy and Matt Hardy.

There’s not much more to say about it as we’d already seen this sort of thing earlier in the night. The match was pretty fun, but it felt like they were trying to fit too many story beats into it. A theme that would bleed into the next match too.

Well then. In what is possibly the only non-title-related feud in the Women’s division, this one was ruined by a jumbled mess of story threads. Let’s split it up, point by point:

. Jay and Ford had a short match.

. It involved The Bunny running in, followed by Tay Conti.

. Then the HFO came out, again.

. Now half of the Dark Order is here.

. Then comes the other part of The Dark Order that split off.

. After rushing the ring, the Dark Order squabbles a bit.

. Hardy has an interview about Cassidy.

So, in one segment, we had the Dark Order split storyline, the Conti-Jay vs Ford-Bunny feud, Hardy and Cassidy hair-vs-hair story -for a second time in successive matches- and something to do with Statlander, a plot thread I must’ve missed in all the commotion. What a mess. I thought we were done with this faction-warfare overbooking nonsense.

Oh, and during the match, we had the exact same convoluted cliché that happened with Jungle Boy as Jay broke a submission due to someone standing on the apron. Ooo, I wonder why that happened to both Jungle Boy and Anna Jay. Oh, it’s going to be like that painful Seth Rollins and Becky Lynch storyline all over again. Yes, Michael Cole, we know they’re a couple you don’t have to keep bringing it up. I’m all worked up now.

On paper, this had the potential to be the best main event of the year. Yes, I may have a bit of bias going into this one. So, did it live up? Let’s see.

Like you’d expect from a Lights Out match it was an all-out brawl from the off. Mox had his hands taped up for a considerable amount of time while being whipped with a leather belt and kendo sticks, as well as submissions, power moves, and being hit with a trash can lid.

While it was basically a mass weapon brawl, they kept trying to combine parts together like they were tag-team maneuvers. For example, like someone being hit with a kendo stick while being in a submission. The problem was, nobody seemed to be on the same page. It was more of a series of great individual moments masquerading as a tag match. Unfortunately, most of the issues stemmed from Suzuki. It could’ve been due to a language barrier, but some of the spots they were setting up would end up being fumbled upon execution.

For example, after Mox’s hands were unbound by a debuting Homicide -yes, that happened by the way- he pretended to still be tied up to get a surprise jump on Suzuki, but the next move Suzuki went for required Mox’s hands to be unbound, something he wouldn’t have attempted if he thought he was still tied up. That forced Mox to quickly spring the “trap”.

Still, the Homicide appearance was fun, albeit inconsequential in hindsight as he didn’t really do anything of note post unbounding. Also, the finish which involved Kingston putting Archer’s head in a bin and repeatedly hitting it with a kendo stick for a few minutes was fun. An enjoyable enough brawl to close the show, but it could’ve been so much more.

In comparison, it wasn’t as good as the first night of Rampage Grand Slam. It should’ve been, but it wasn’t. You could even say it was quite a weak show in comparison to the streak AEW have been on as of late. The highlight was undoubtedly Cage & Jurassic Express vs SuperKliq and the upcoming Cole vs Jungle Boy match should be a cracker. The other, identical tag match was enjoyable enough, but unfortunately, everything else was a little bit disappointing. Well, disappointing for AEW. So, Rampage Grand Slam was still a pretty good show.

Miro vs Guevara: An Unexpected Twist