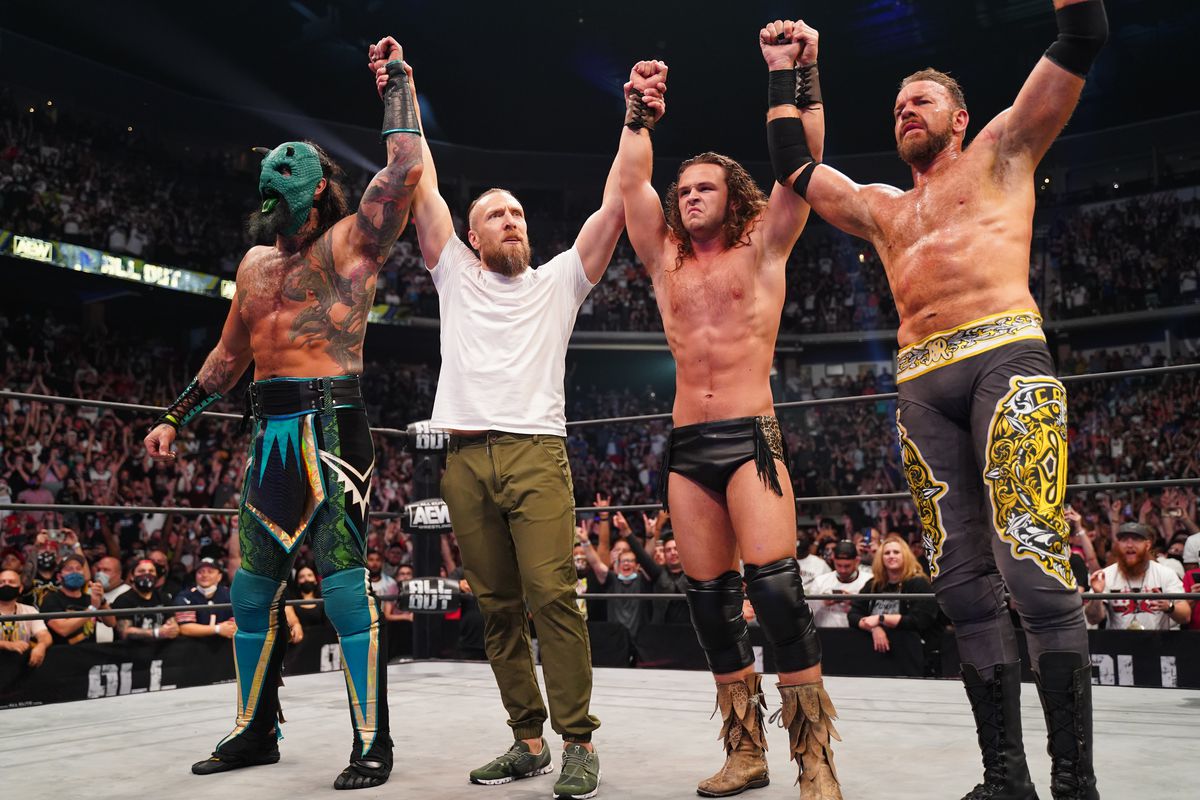 You may have already read our prior claim that AEW All Out 2021 had the potential to be AEW’s best show ever -if you missed it, find it here. Well, now All Out 2021 has been and gone let’s have a look at whether it lived up to expectations.

Good move from AEW, start the crowd off hot. The people love Eddie.

It was an all-out brawl from the get-go and they both did a great job of playing to the crowd. No fancy moves or counters, just heavy hits. Miro vs Kingstone was unlike anything else on the card. It would’ve actually been the perfect palate cleanser in the middle of the night, though you can’t argue with how amped up it got the crowd.

After a long series of wonderful power moves and chop battles, we had a sublime near-fall where Eddie escaped the Game Over submission -being the first to do so. A second, excellent near-fall came with Kingstone hitting Miro’s alleged “Kryptonite” the DDT.

The finish was either creative or irritating, depending on your personal preference, with their use of the referee. Either way, great opening match.

Moxley’s now-series of battering Japan’s elderly population on AEW soil had its second outing against NJPW legend Satoshi Kojima. Mox played up the heel role as you’d have expected. The crowd really got behind Kojima despite the fact that most of them likely didn’t know much about him. AEW fans are the best.

The match was what you’d have thought it would be. What the Nagata-Mox match was. An exhibition. A fun one too. The biggest moment came after the match when Minoru Suzuki came out to challenge Moxley. I was not expecting that. Bring on Dynamite.

AEW’s Women’s division has been on life support for a while now. While it has taken a couple of hits from the defibrillator with the likes of the Baker-Rosa match and anything from Serena Deeb, the division has been a damp squib for quite some time. This bout was exactly what the division needed. Wonderful stuff.

Statlander is a star and will definitely be a champion at some point. However, as spectacular as the match was, the outcome was inevitable as Baker’s run had only just begun. Nevertheless, Baker vs Statlander was one of the sleeper hits of the night. Britt Baker’s rise has been incredible.

I went into this one with an open mind. I have been very critical of The Young Bucks before and generally don’t like their matches. However, the Lucha Bros are possibly my favourite tag team and the two duos do generally gel well.

The Bros were rapped to the ring with a live rendition of their entrance tune and their flamboyant ring gear was wonderful. Yeah, they were clearly given the ‘new champs’ treatment early. Also, to make it more clear, The Bucks entrance was understated. Cheers for telegraphing the result, AEW. It would’ve made more sense to do it the other way round. Still, the crowd was hot and I was hyped.

It was a spot fest, as you’d expect. It’s quite hard to pick a highlight when the whole match was a highlight reel, so rather than a specific moment, let’s just say Rey Fenix. What a star. The whole bout seemed built to get Fenix over even more. He was playing the resilient babyface role to a tee. So, inevitably, he’d get the big moment for the win which came from a massive Cross Body off of the top of the cage.

The problem is, these sorts of matches undermine the others on the card. The amount of finisher kick-outs and big moves not ending things makes everyone else look weak. Piledrivers, a Canadian Destroyer off the top rope, thumbtack spots, none of them finished it. Combine that with clear telegraphing at the start and it took away from what would have been an incredible match. So, yes, it was very good and made for a lovely moment in the end, but it could’ve been so much more. Also, does anyone else want to see Fuego Del Sol joining the Lucha Bros now they’re faces? That team would be so very over.

AEW’s Casino Battle Royales are like if Royal Rumbles were a bit rubbish. The confusing thing is, is that they say they come out in set groups, but they still head to the ring individually so they can get their entrance themes in, meaning it’s just like a messy Rumble.

Anyway, it was like all Casino Battle Royales. Fine. The Joker turned out to be Ruby Soho which most people expected going in. Still, it doesn’t take away from it being a great moment though. The final two came down to Soho and Thunder Rosa, the two expected favourites. Ruby won in the end after a nice sequence on the apron. The Women’s division had a big night at All Out 2021.

‘If Jericho Loses, He Retires’ Match: Chris Jericho vs MJF

At the start, Jericho’s classic Y2J countdown hit on the ‘TitanTron’ and popped the crowd. Though as it was about to kick in, MJF’s theme started and he came out dressed as a king. What. A. Bastard. Ten out of ten. Best in the business.

Jericho came out to a guitar solo rendition of Judas which was, unfortunately, a bit rubbish due to tech difficulties. Good idea though.

Plenty of unique offenses and creative sequences on show. Storytelling beats like MJF selling the lower back to foreshadow the potential submission finish. However, there was a unique faux-finish where Jericho had his foot on the ropes during the three count. After the bell rang, the match was restarted. A quick back and forth later and Jericho gets the submission locked in for the win. The crowd goes wild. Wonderful match.

I have to admit, they got me. I thought that this was it for Jericho. Apparently not.

The moment the Chicago crowd was waiting for.

The match was a slow one. You could tell Punk was keeping it steady on purpose. They were also clearly calling it on the fly as Punk was very visibly calling spots. He also looked quite gassed early on, hence all the rest holds. It was messy, clunky, though the thing is, it didn’t matter. It was just nice seeing Punk back. He was looking well too.

The latter half picked up considerably. There were some great moments, the best being Punk countering the Coffin Drop by just sitting up. Very slick. Other than that, there’s not too much to say about the match. It was more about the occasion.

Afterward, Punk, Sting, and Darby had a moment in the ring as the crowd chanted “Darby!” I’ve never been more envious of another human than I am of Darby Allin. In the end, Punk teased going down the ‘Heel Tunnel’. The cheeky scamp.

It was the squash match we expected. Short and sweet.

The All Out main event was a Kenny Omega match. You know Omega matches. They are generally great, technical showcases that you come out of wondering how either man still has a functioning spine.

The crowd started slow as it was far into a very long night -4:30am in the UK, my brain had melted into a puddle by that point- but they picked up mid-way through. Then, proceedings took a downturn as The Elite got involved. Boo. Overall, the bout was a good one, but it was definitely not the match of the night. However, afterwards, we were treated to the appearance of not only Adam Cole, but Bryan Danielson too.

If the match had just ended and that was the show done then it’d have been a deflating ending -though if that was the case you’d imagine that Punk-Darby would’ve main evented. Thankfully, with the two post-match reveals, the end of the pay-per-view will be remembered for many years to come, topping off a stellar night of pro-rasslin’.

A good match, but it was more a vessel for what was to come afterward.

AEW All Out 2021 Conclusion

If you were to push me for a match of the night, against all odds I’d have to say MJF and Jericho. I don’t think AEW has told an in-ring story that well since Cody-Dustin. The tag title match was electric but marred by some issues, the main event was good but nothing more, and Punk-Darby was more of a moment than a match. It was the lower card that made All Out 2021 so good. Other than Jericho and MJF, Baker vs Statlander was one of AEW’s best Women’s matches to date and Miro vs Kingstone was a sublime brawl.

Matches aside, the appearances of Bryan Danielson, Adam Cole, Ruby Soho, and Minoru Suzuki took the AEW “surprises” tally for the last month up another level -impressive considering that already included CM Punk. The production was excellent, the crowd was incredible, every match delivered in some way or another, it was just an all-around brilliant show.

To answer the question posed at the start: yes, All Out 2021 was by far the best show AEW has ever put on and it was the best wrestling show in decades in general. Call it recency bias if you will, but I stand by that statement nevertheless. Just think, it could’ve had Pac vs Andrade too. I don’t think my lil’ heart could’ve handled it.