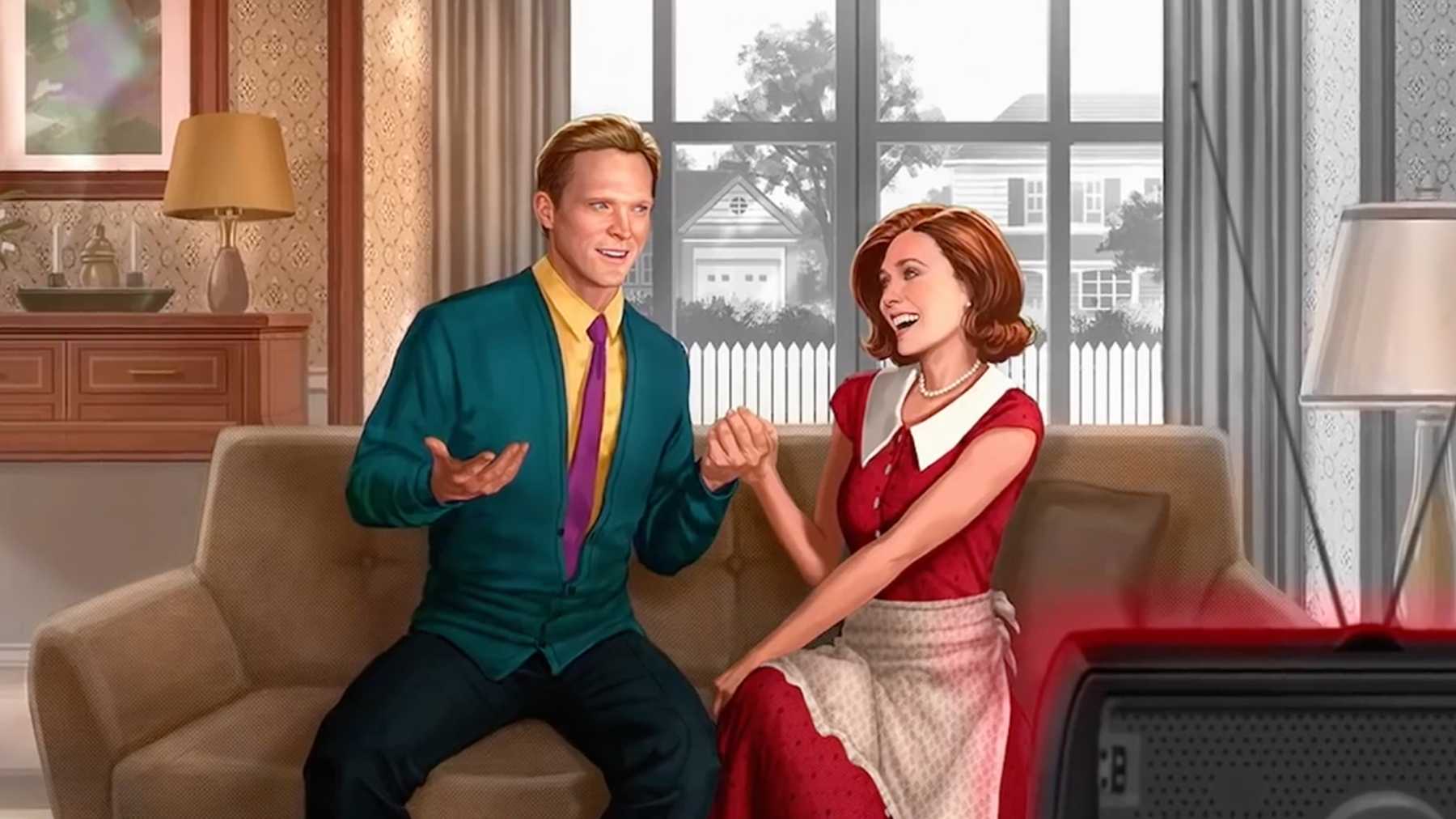 Spoiler Warning for Episodes 1 and 2 of WandaVision as well as for Avengers: Infinity War and Avengers: Endgame

With the first two episodes of Marvel’s television series WandaVision having premiered on Disney Plus last Friday to pretty good reviews, now seems like a good time for a bit of good old speculation. One of the main themes of the show is the mystery behind what is actually going on, as Wanda Maximoff – a.k.a Scarlet Witch- played by Elizabeth Olsen and Vision- a.k.a the android hero who died in Avengers: Infinity War– played by Paul Bettany, find themselves within a retro sitcom with no memory as to how they became married or where they came from. It’s all a bit peculiar and a far stretch from the kind of genres that Marvel are usually associated with, making it a thoroughly unique and highly enjoyable show so far. Let’s take a look at some of the biggest questions to take away from the first two episodes.

One of the biggest questions that came about even when the show was first announced was how is Vision even alive? Vision met his demise in Avengers: Infinity War when the mind stone was unceremoniously ripped from his head by Thanos. He doesn’t return in Avengers: Endgame, as he was killed before Thanos, snapped half of the universe away. Wanda has been shown to be one of the most powerful heroes in the MCU after obtaining her powers from the mind stone and it could be that the grief from the loss of her love Vision- as well as all the other losses she suffered during her time in the MCU including losing her parents to a Stark Industry weapon, losing her twin brother, her home country of Sokovia being destroyed and being responsible for accidentally killing innocents in Captain America: Civil War (damn, she has got to be one of the more tragic of the heroes)- could have caused her to create a new reality in which she and Vision are living an ideal, domesticated life. This is similar to the House of M comic book storyline wherein Wanda loses her mind and is able to completely alter the fabric of reality.  However, in episode two we hear a voice trying to get through to Wanda via a radio. The voice asks “who is doing this to you, Wanda?”  It is still possible that she could be doing this herself but there’s also a chance that she has been trapped by someone using her for her powers.

In episode two, there is a suggestion of the counterterrorism group S.W.O.R.D- otherwise known as the Sentient World Observation and Response Department from the Marvel Comics series- who are basically the S.H.I.E.L.D (see what they did there?) of intergalactic threats. We see Wanda catch a glimpse of a toy helicopter, which stands out due to its red colour amongst the black and white scenery. After the helicopter is found, the character “Geraldine”- who the audience knows is an older version of the character Monica Rambeau from the 2019 Captain Marvel movie- makes an appearance. It’s possible that the helicopter could represent the S.W.O.R.D agency infiltrating this universe that Wanda and Vision find themselves in with Rambeau acting as their agent. If that is the case, could it be an alien entity causing this madness?  Why else would S.W.O.R.D be involved if there isn’t some kind of intergalactic presence?

The bizarre advertisements that we see in both episodes one and two are some of the more interestingly mind-boggling elements of the episode, providing lots of little hints but offering way more questions than answers. In both adverts, the same actors are used- Ithamar Enriquez and Victoria Blade respectively- even though they play different parts in both commercials. The advert in episode one is for the “Toast Mate 2000”. The product comes from Stark Industries and the design of the toaster seems to be more similar to that of a weapon, with a red light that blinks and mechanical bleeps a countdown until the food is done. The red light is again eye-catching as it is another colourful addition to a black and white scene. It’s also the first colour to be seen at all in the show, which could be important. The slogan of the toaster is a little more on the nose, “Forget the past, this is your future!” This directly relates to Wanda, with her tragic past being replaced with this chirpy and cheerful yet synthetic future. There are a fair amount of references to Tony Stark and Iron Man too, most obviously the Stark Industries tech and the red light. An interesting theory is that the toaster could represent the Stark Industries bomb that killed Wanda and her twin brother Pietro’s parents when they were children in Sokovia. In Avengers: Age of Ultron, Wanda, and Pietro tell Ultron about how their parents were killed by a Stark Industries mortar shell that hit their apartment. The siblings survived but were trapped in their home by the unexploded shell for days before they could be rescued. Pretty traumatising stuff. The rapidly blinking light on the Stark Industries toaster may well be an element of Wanda’s memory of the mortar shell manifesting itself within this reality. If this is the case, could this man and woman represent her parents? Am I reading a little too far into this? It’s all possible at this point!

The Ads- The Strucker Watch

This one is a little more obvious than my rantings on the toaster. The Strucker watch is clearly a reference to Baron Von Strucker; a HYDRA leader who played a key part in Wanda’s backstory. Wanda and her brother were experimented on by Strucker and were the only volunteers to survive said experiments, giving them their powers. The face of the watch in the advert has a HYDRA logo emblazoned on it, clearly referencing Strucker’s link to the organization. There is also another slogan that feels related to Wanda’s memory of Strucker, “Strucker: He’ll make time for you.” It could be argued that this is exactly what Strucker did for the Maximoff twins, focusing on them as the sole survivors of their experiments and devoting his time to their growth as his super-powered henchmen. Wanda is sure to remember Strucker due to his life-altering experiments, giving her superhuman abilities and forcing her to be connected to HYDRA in doing so.

The most random encounter came at the end of episode two, as a beekeeper emerges before Vision and Wanda from the sewer. The only response the beekeeper gets is a simple “No” from Wanda. This was one of the bigger WTF moments so of course, the fan theories are rife. Some think he could be an agent from S.W.O.R.D. or A.I.M. One of the more interesting theories is that this could be the Marvel Comics villain Swarm. Swarm is a character who is composed almost completely of bees. Yep. He is a literal swarm of bees. Nightmare fuel, right? Swarm could have some connections to HYDRA, as his human alter ego is a Nazi by the name of Fritz von Meyer and HYDRA were originally a Nazi organization in the comics. He was a beekeeper who was eaten alive by a swarm of mutant bees. Yikes. The bees then take on his consciousness to become the supervillain  Swarm. Bit of an odd backstory but as a character that was once an actual beekeeper, it is possible that this may be Swarm, an affiliate, or a similar character.

These are just a few of the questions that I had after watching the first two episodes of WandaVision. Of course, I could be way off with these theories and ideas. But if there is any truth to them, none of this can mean anything good for Wanda and her state of mind. Scarlet Witch/ Wanda Maximoff is actually one of my personal favourite characters in the MCU so I’m intrigued to see just how far the show will be delving into her psyche. I suppose we will have to see as the series continues on Disney Plus!

Flack is a Buoyant Series About Crisis PR