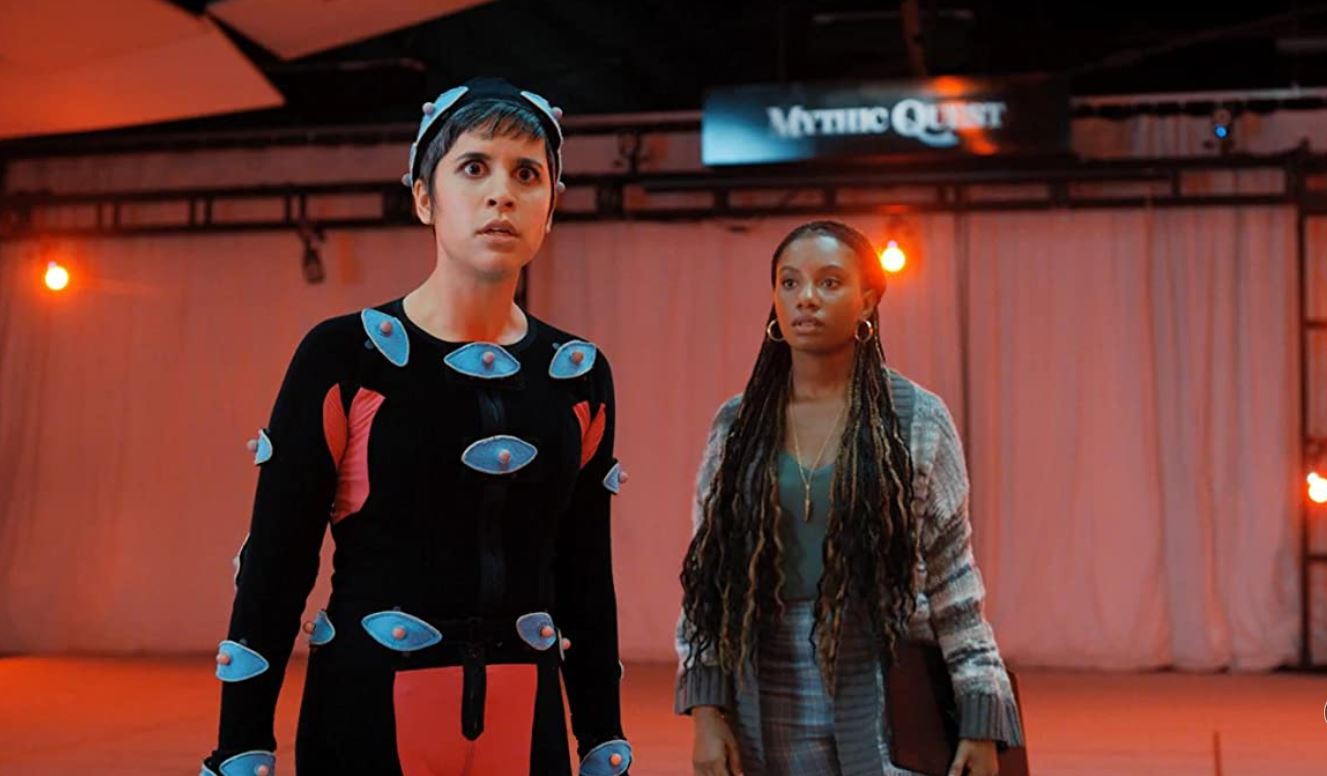 Mythic Quest, which has left the ‘Raven’s Banquet’ behind for its second season streaming on AppleTV+, is a guiding light for the possibilities of television in this era. Every moment of workplace drama within the Mythic Quest video game company feels like a masterclass in comedy. The lines are sharp and witty; sometimes cutting, always delivered with flawless comedic timing. Mythic Quest shines in ways that more of the current television landscape should: It uses the talent and dynamics between their brilliant cast to unpack an array of issues affecting people of marginalized identities.

The show uses its signature light-but-not-belittling tone to acknowledge the struggles of gaming industry employees by highlighting gender inequality, the emotional labour performed by people of colour, and unfair working conditions of the art department. This season would not be what it is without the diversity of its cast, which includes the strikingly relatable queer romance arc. What’s also lovely about the depiction of diversity in Mythic Quest is that there is never direct intentionally cruel discrimination.

Season two opens with a corporate shift between our main characters. Poppy Li (Charlotte Nicdao) joins Ian Grimm (Rob McElhenney) to lead the new phase of their game’s direction, now as“Co-Creative Directors, equals!” She will have to collaborate with Ian, who makes bold creative decisions according to impulses to which the entire office is attuned to. We journey with Poppy as she finds her footing and develops confidence in herself, stumbling through both but making strong headway. Worth noting is that, in her interactions with her employees, Poppy is (amazingly) allowed to be just as unlikable and impersonable as Ian.

There’s an entire episode dedicated to the “girlbossification” of Poppy, which she absolutely triumphs over. When she’s “honoured” by being asked to speak at a Women in Gaming lunch, her speech transforms into something which acknowledges that she is “not an alpha” and proclaims that she’s sick of apologizing. She rambles loudly and unzips her dress, then announces that she has just “tooted” on stage. Every member of this cast is unhinged in their own way! What unfolds afterward leads Ian to look over at Poppy, standing in the middle of the event with her dress unzipped eating candy from her “Halloween bag” of a purse, and realize: “That little mess of a human being is a boss.” In a later episode, Poppy, no stranger to saying outrageous things out loud and simply moving on from them, is confronted about having made a particularly problematic comment about Dana, a Black co-worker, being her chauffeur. Poppy reasons out loud that “I’m a woman of colour so I can’t —I can’t get cancelled, can I?” She thinks about it for a moment and then decides, “I don’t think I can get cancelled. I think I’m good.”

When Poppy rushes past to get into the car, Dana takes a moment to chat to her girlfriend, Rachel, remarking that she must “work twice as hard to get half as far.” This is a phrase that every person of colour, particularly Black people, know by heart in the depths of their bones, but Rachel simply does not get it. “Twice as hard as what?” she asks. “Nevermind” Dana replies, and the show leaves it there, a quiet nod to the Black community from the Mythic Quest writers room. There is so much power in the writers acknowledging and highlighting the extensive labour that people of colour are roped into. Dana, who approached Poppy for mentorship with coding, is now driving her around on frivolous errands. We also have several encounters with Carol, the Head of Human Resources (and a Black woman), who is dragged into detailed, unprofessional discussions with both Dana and Rachel about their love lives, despite being very vocal about how the time-consuming work of listening to their personal problems is not her job.

In the latest episode, titled “Breaking Brad”, we are presented with some backstory and insight into Mythic Quest’s corporate monster: Head of Monetization, Brad Bakshi (Danny Pudi). Until then, Brad’s defining characteristic has been that he is driven by money, a visionary for the commercial potential within the Mythic Quest business model. His usual snappy, brazen, sure-fire demeanour is dampened by uncertainty and suspicion about his brother’s sudden appearance at his workplace. Brad battles to come up with coherent responses to his brother’s unwelcome surprises (which include cake, and Snoop Dogg!). Meeting his brother, played by Parvesh Cheena, allows us the opportunity to see Brad’s vulnerability. We are also given the chance to see how much this game and the Mythic Quest office truly means to him: He is willing to beg his brother not to kill it. There is a surprising and welcome depth shown to this character whose greed and dismissive attitude could easily have been left surface-level.

Another universal problem explored wonderfully in season two: The co-worker crush. Queer edition. The primary romance of season two is between the two video game testers, Rachel (Ashley Burch) and Dana (Imani Hakim). In season one, they spent days together side by side on the couch, with a brief interlude when Dana is presented as a streamer for the company. In classic queer-person-with-a-crush style, Rachel overthinks every potential clue to Dana’s sexuality and/or interest in a romantic relationship. ‘She’s being so nice to me, we are so close, but what does it all mean?’ It’s an ever-present truth; second-guessing what feels like intuition is a familiar, intoxicating haze for queer women. In one scene the dilemma is clear as day on Rachel’s face: ‘So she had a sex dream about our male boss, but is she also… into girls? Could somehow still she be into me?’

Dana is complicated and mysterious, but not because of her Blackness. This in itself is a rare and precious occurrence on screen. We hang onto her every word and intonation because we view her through Rachel’s eyes. Is there some sexual tension between them or is this a way-too-much-time-spent-in-a-dark-room-together friendship? In Dana’s conversations with Carol from HR, it seems like she hasn’t figured out how she feels about Rachel either. We come to realise that perhaps she isn’t being coy, she’s just still waking up to her emotions. When they finally have their first kiss, it’s initiated by Dana, and feels triumphant; even the music is joyful, like a parade. Queer viewers will likely have noticed the additional fanfare of iconic fan-favourite “bisexual lighting” as they lean back in and continue the kiss.

Contrasting the season-long drawn out ‘will they won’t they?’ of season one, by the second episode of season two, the romantic relationship between Dana and Rachel has already been abruptly announced to the entire office (where literally no one cares), they’ve been paired together on a mobile game project, and realized their career goals are on opposite ends of the spectrum. The new couple tries to balance their incompatible levels of ambition with the joy of finally being together after a season of pining. Rachel and Dana’s panic at not wanting to offend each other while caring so deeply about supporting the other person (also a highly authentic depiction of modern queer love) is, generously by the writers, not fractious or dramatized. Their romance continues, with room to practice navigating negotiation and collaboration within their work context.

In a short space of time (just four episodes) this workplace comedy has taken the audience from gif-able longing looks between two female characters to a safe place for two women in a new but lasting relationship where they can bloom together. Dana and Rachel may be fumbling and bickering along the way, but they are given the freedom to figure it out. As of now, the testers find themselves in a grounding position where they’ve each been taken in by the feuding Ian and Poppy who fail to make their co-leadership work. In the process, they’re holding hands and communicating well, bringing their bosses together and realizing their individual needs.

Amazon’s The Underground Railroad is Tough to Watch, but Essential Viewing

Seven Things We Learned from Dark Side of the Ring’s: “Collision in Korea”