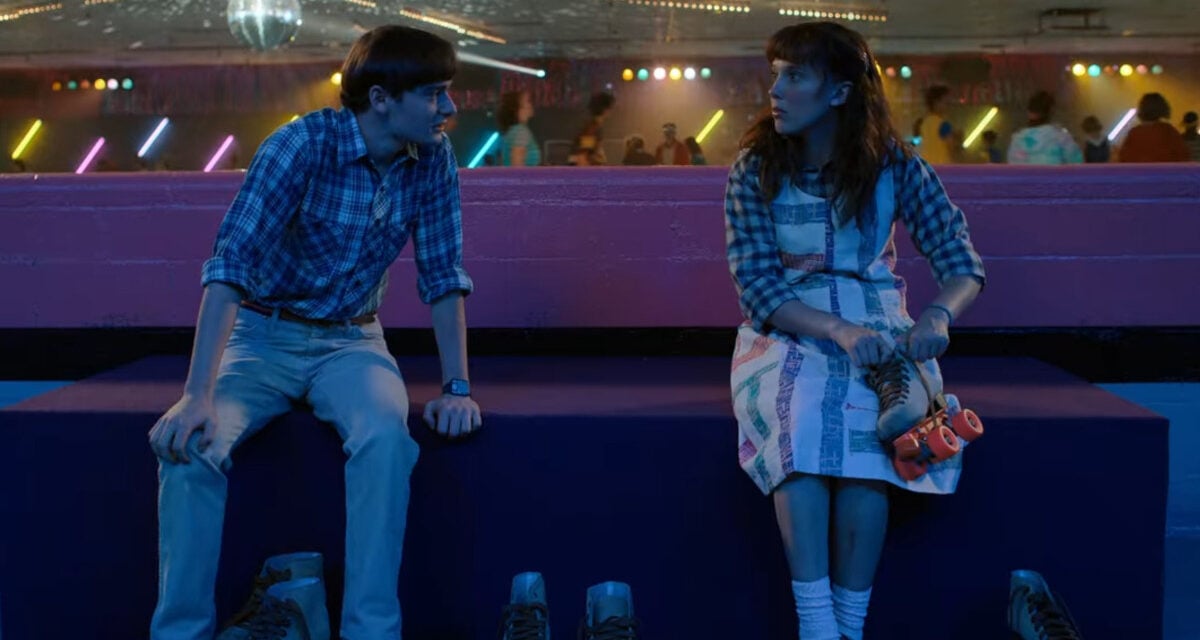 With the obligatory reintroductions of “The Hellfire Club” out of the way, “Vecna’s Curse” is Stranger Things 4‘s first opportunity to be itself, to stretch its long, Mind-Flayer like legs a bit, and show the audience what it is all about. It certainly has the room to; in what I imagine will become a running theme this season, the size and scope of “Vecna’s Curse” are both a gift and a curse, 70 minutes of television that feel both perfectly calibrated to the story it is telling, and extremely poorly arranged to do so effectively.

Though the throughline of the episode is pretty simple – evil; it’s hard to contain! – how “Vecna’s Curse” goes about telling that story is anything but, bouncing spastically from character to character as it tries to keep up with all of its primary and secondary characters. Which, on some level, I can really appreciate – but in practice, it makes “Vecna’s Curse” feel like a mid-season Game of Thrones episode, where one can almost lose their sense of place and time in a given scene (a problem that is not going to subside, as Joyce and Murray embark on a trip around the world to save Hopper… who was a fucking asshole all of season three, I just want to remind everyone).

Look at a character like Jonathan; does his romantic angst register with anyone in the audience, a scene shoved in between creepy supernatural teases, a buffet of Carrie references, and a bunch of slick shot transitions? Like the orange gash remaining after the mall explosion, there’s so much “Vecna’s Curse” is trying to show the audience it almost feels like the show is slowly starting to pull itself at the seams (or rip itself apart from the inside, to borrow a very unsettling metaphor from our body Pauly S- I mean, Eddie.)

The lack of a shit Stranger Things gives about Jonathan and Nancy’s relationship occurs in other moments; whether the love lives of the Family Video buds or the random tragic backstory Fred’s given eight seconds before he loses his mind (and life), Stranger Things is showing no discretion between what stories it wants to tell, and what stories it needs to tell. It’s a tall ask for a show with an unlimited budget and all the cultural cache one could ask for; and it clearly has led to some assumed expectation that every loved character will have their One Moment each episode – which is fine, except when they all run together, edited into a stuttering, constantly distracted mess of an episode.

For an episode that is, again, over 70 minutes long, one might think there a bit more time to dig into the characters of Fred and Angela, or take a little more time to depict why Will is such a mopey bitch for the first 40 minutes of the episode (until we get the second of “hey, you’ve changed” speeches this season, a trend I expect to continue in various forms because high school!). It’s too bad – there’s a lot to enjoy in the various scenes of “Vecna’s Curse”, from the Russian general who asks Hopper “Will you die for this woman?” (of course he will!), to the ominous, violent shift in El’s behavior.

“Vecna’s Curse”, with its spider-filled grandfather clock and Night King-ripoff Baddie (“I want you to join me” he says to Fred, with his syphilis-destroyed face), has tone and intrigue in abundance – but its awkward execution is certainly going to cause issues as the show tries to build momentum towards a mid-season cliffhanger. There’s an entire arc of Joyce putting on her Slightly Insane Detective hat for the first time in a while (with Murray in California, to boot) in the hunt for Enzo, and it can barely even register on the emotional spectrum of the episode because… well, you know, there are gruesome ass murders of teenagers happening, and we need to put some time aside for Fred to be the world’s first Twitch simp for Nancy (who is somehow the most magnetic woman on the planet? This show really wants us to know that 80’s society is into Nancy’s vibe).

All of this, set to a backdrop of random tunes (“Amadeus”? Here?) that seems to be missing the point of its most interesting scenes – Lucas and El’s identity crises are really intriguing plot threads to pull on, especially as the two characters are isolated a bit from the safety nets of the original D&D club. But the moment these stories turn into something really dark and ominous – Eleven starting to awaken her old murderous self, Lucas hearing the phrase “Let’s beat freaks!” and not knowing how to react – Stranger Things has to cut away from them, because of Vecna, Russia, lesbian pining (boy, I am nervous for the fate of Robin’s crush!), Eleven’s lost powers, the whole “science experiment” thing, and of course, time left for the Duffer Brothers to reference every 80’s director, horror movie, and popular piece of media they possibly can at the same time.

It all adds up to a very, very ambitious show on paper; and though “Vecna’s Curse” is certainly entertaining in moments and welcomely creepy in others, the cumulation of mental gymnastics this episode requires across 70+ minutes dampens some of the show’s more meaningful moments. Stranger Things is certainly off to the races this season – but it’s not clear yet whether its taking its characters along for the ride because it has an amazing, emotional story up its sleeve, or if its just throwing them in front of plot points and beats from 80’s movies, simply because the machine of content demands it keeps spinning. Only time will tell; I’m cheering for our crew from the Upside Right, but I’m worried we’re all going to feel like Hopper after a year in solitary, if these episodes continue to be as sporadically paced and sprawling as they’ve been.

Why You Should be Watching Girls5eva