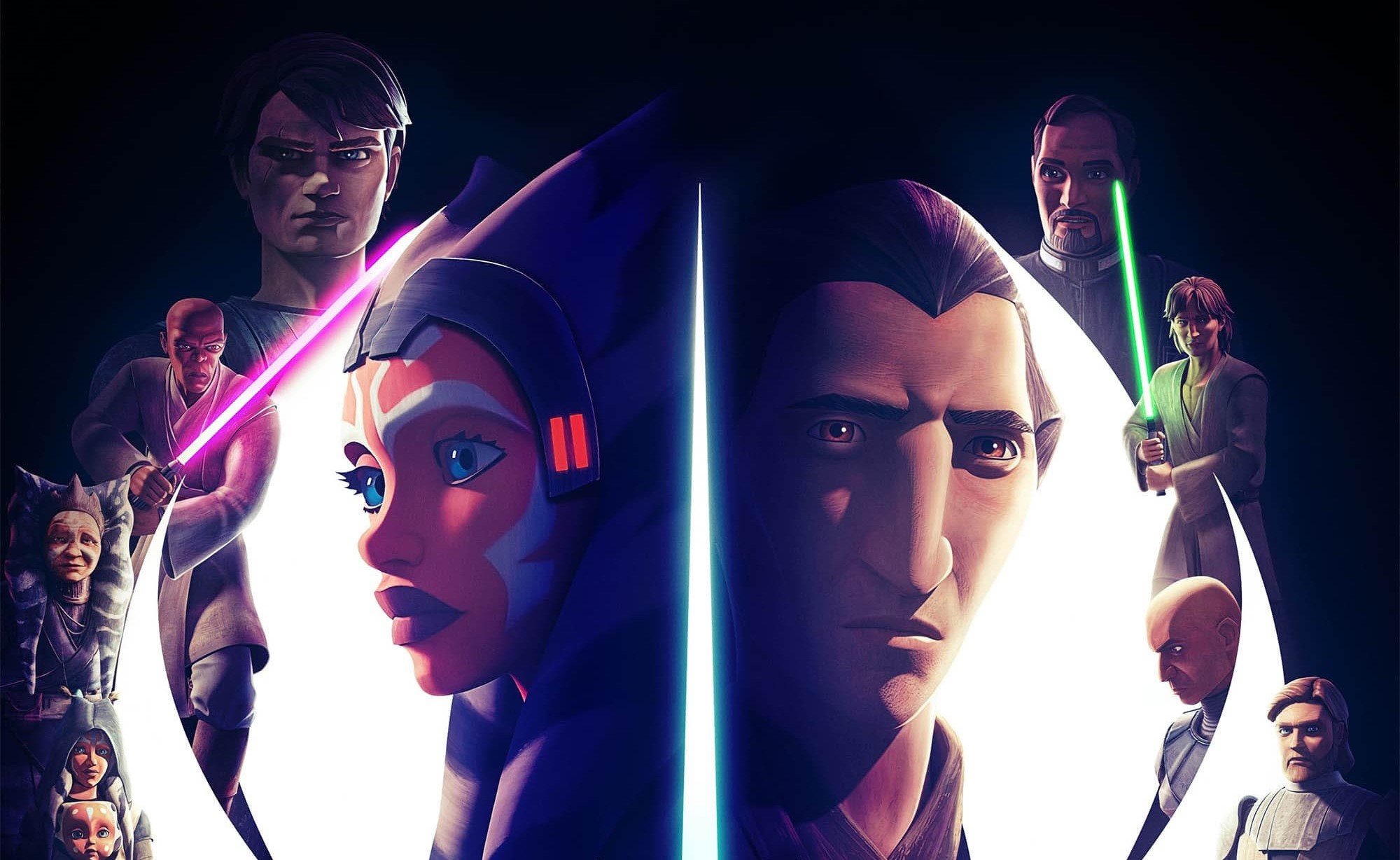 For anyone who can’t get enough of The Clone Wars and is looking for more, you’re in luck now, thanks to Tales of the Jedi.

Even after spending well over a decade evolving with its audience and ending on a proper note, I think it’s safe to say as a Star Wars fan—and even a critic—that the desire for more stories from George Lucas and Dave Filoni’s animated brainchild is astronomical. In the face of the prequel trilogy’s mixed reception, Star Wars: The Clone Wars was a masterful work of television that fixed just about everything wrong with a series of films containing quite a few notable problems. While its earlier episodes certainly had their flaws and lacked its later maturity, the show took off with its second season and has since left fans desperate to explore the franchise’s whole prequel-era galaxy.

With seven seasons and a surreal conclusion, you would think Disney would have laid the inherited series to rest for some time, however, Lucasfilm has been keen on utilizing the iconic art style of The Clone Wars and its vault of unopened stories still yet to be explored–and with good reason! Tales of the Jedi feels like a handful of shortened lost chapters that could have easily been a part of Star Wars: The Clone Wars if the show’s timeline had been expanded both forwards and backward. Ironically, in a time where audiences are begging for “new” Star Wars content that takes a new spin on the franchise, what fans want most is perfectly captured in Tales of the Jedi’s overarching narrative: perspective.

Without any spoilers (even though this is a prequel and there is not too much to actually reveal), Tales of the Jedi is a six-episode series that is split right down the middle as it focuses on two Star Wars Jedi stories across three entries each. Told in chronological order rather than the anthology approach its predecessor took, Tales of the Jedi is about the rise of Ashoka before and after the events of The Clone Wars and how Count Dooku went from Jedi to Sith prior to the events of Episode II: Attack of the Clones. While the episodes are all thematically connected, they mostly explore self-contained stories within each Jedi’s life that ultimately led to their later decisions in life–whether that be for better or worse.

Tales of the Jedi is being advertised by Disney and Lucasfilm as the stories of two sides of the Jedi; those who stayed within the light and those who fell to the dark. While the show’s initial structure may feel as if this concept is being overshadowed by some of the more contained stories on display, the chronology of the series helps give legitimate weight and meaning to the idea. Tales of the Jedi is a concrete story of the light and dark sides of the force as Ashoka rises to become something greater while Count Dooku descends onto an inescapable destructive path. While first impressions certainly feel as if the viewer is experiencing two different shows, it quickly becomes clear why the series was designed this way once the season reaches its back half of episodes. The exploration of perspective in regards to how the Jedi believe and operate upon their causes will keep audiences hooked and Star Wars enthusiasts salivating for more.

If it were not for the premiere, the entire series would be a perfect little lineup of shorts that all connect with one another. Oddly enough, the first episode is the only entry that feels unfitting of the series’ theme as it is the only one that lacks that aforementioned perspective. The choice to focus on Ashoka as a baby and her parents feels like a wasted opportunity to delve more into the show’s overarching points. Don’t get me wrong, the episode is directed beautifully and follows a classic tale many will be made fuzzy by. Compared to the other episodes though, it falters when helping add context to the show’s true focal point. The first episode is the only entry that does not exactly tackle a Jedi’s failures and upbringings, and the idea of pushing forward to achieve peace even if the tactics used are murky and harsh.

It also should be noted that Tales of the Jedi’s first episode may present a rather hopeful tone, but the show is quick to make itself one of the more mature pieces of Star Wars content as characters are sucked into the downward spiral caused by Palpatine’s manipulation and the shadow of war. Every episode after the premiere is, for the majority, spearheaded by a moody and melancholy tone. Tales of the Jedi is a character study that is not afraid to push its cast. It is not just a couple of stories to fill in some straggling holes in the ever-expanding Star Wars lore. Again, its overarching theme is perspective, and its characters are meant to suffer from it. Dooku is forced to murder his friends and defy his loyalty, and Ashoka must learn the hardships of war as she becomes a better Jedi and is forced into hiding.

Like Dave Filoni’s animated projects that fall in his comfort zone of prequel material, on top of some hard-hitting dialogue and character arcs, Tales of the Jedi has phenomenal direction that helps the show lay in contrast with the creator’s other animated Star Wars content. As per usual, the impressive digital cinematography and art direction are a Dave Filoni staple that always pleases. Tales of the Jedi really is your familiar Clone Wars atmosphere that feels like home. Each location feels alive, there is a surprising amount of detail, some special faces make an appearance to elegantly help drive the plot, and Kevin Kiner’s score is as wonderful as ever. What really will surprise audiences though is how much effort went into all the voice work. Cory Burton’s performance as Count Dooku has always been masterful and the actor once again breathes new life into Christopher Lee’s character as he forges a younger iteration of the Sith Lord. The same can be said for Ashley Eckstein who continues to voice Ashoka Tano as if she never stopped recording for The Clone Wars.

The only character throughout the entire series of shorts who genuinely feels out of place can be Bryce Dallas Howard’s Jedi Master Yaddle–but this is not because of the actor’s performance or how she is written into the show’s narrative, its a Star Wars fan nitpick coming from myself. Yaddle stands as a great opposition to Count Dooku’s ideas as the fallen Jedi slowly becomes one with the dark side of the force, yet the way Howard had to deliver her safely written lines fails the franchise’s establishment of Yoda.

It has always been believed that Yoda spoke the way he did because of his species, but Yaddle does not talk in a broken speech pattern that reflects an object-subject-verb format. While this seems like a massive nitpick, as a longtime Star Wars fan, this really bothered me as it takes away a defining aspect of Yoda that has been shrouded in mystery since his first appearance in Empire Strikes Back. On top of this, considering how much wisdom Yaddle drops on Dooku and the viewer, it would have felt more fitting for her to be written the same way.

But did this direction choice derail my immersion in the episodes Yaddle is featured in? Absolutely not. Master Yaddle is still great, and the complaints I have targeted at her are practically futile. Considering this is one of my two biggest issues with the show, I think audiences can all agree that Tales of the Jedi is absolutely something all Star Wars: The Clone Wars fans will enjoy—especially those who have submerged themselves in the deepest ends of the lore of the prequel trilogy. The writing is at times superb, the directing is constantly a high point, and the show manages to further make characters sympathize with familiar heroes and villains. It’s always good to walk away from a series of shorts thinking to yourself, “wow, they really should make this into a full-blown series!” and Tales of the Jedi does exactly that.

Tales of the Jedi made me want more from the Star Wars prequels, and perhaps that is a testament to how well the series of shorts stands and coincides with its predecessor. Sure, Yaddle’s appearance will cause some controversy as she makes Yoda look like a bit of a fool for the way he speaks and the premiere doesn’t leave the same impression as the rest of the show, but episodes two through six add a shocking amount of depth to fan-favorite characters with such little time. When putting current Star Wars discourse into perspective, Tales of the Jedi is definitive proof that we don’t necessarily need new ideas in a Star Wars series to make it captivating, hopeful, or even just flat-out entertaining. What we all want is some perspective, and Tales of the Jedi continues to unravel the strengths and weaknesses of the Jedi in a beautiful way as it views a failed council in very distinct lights.