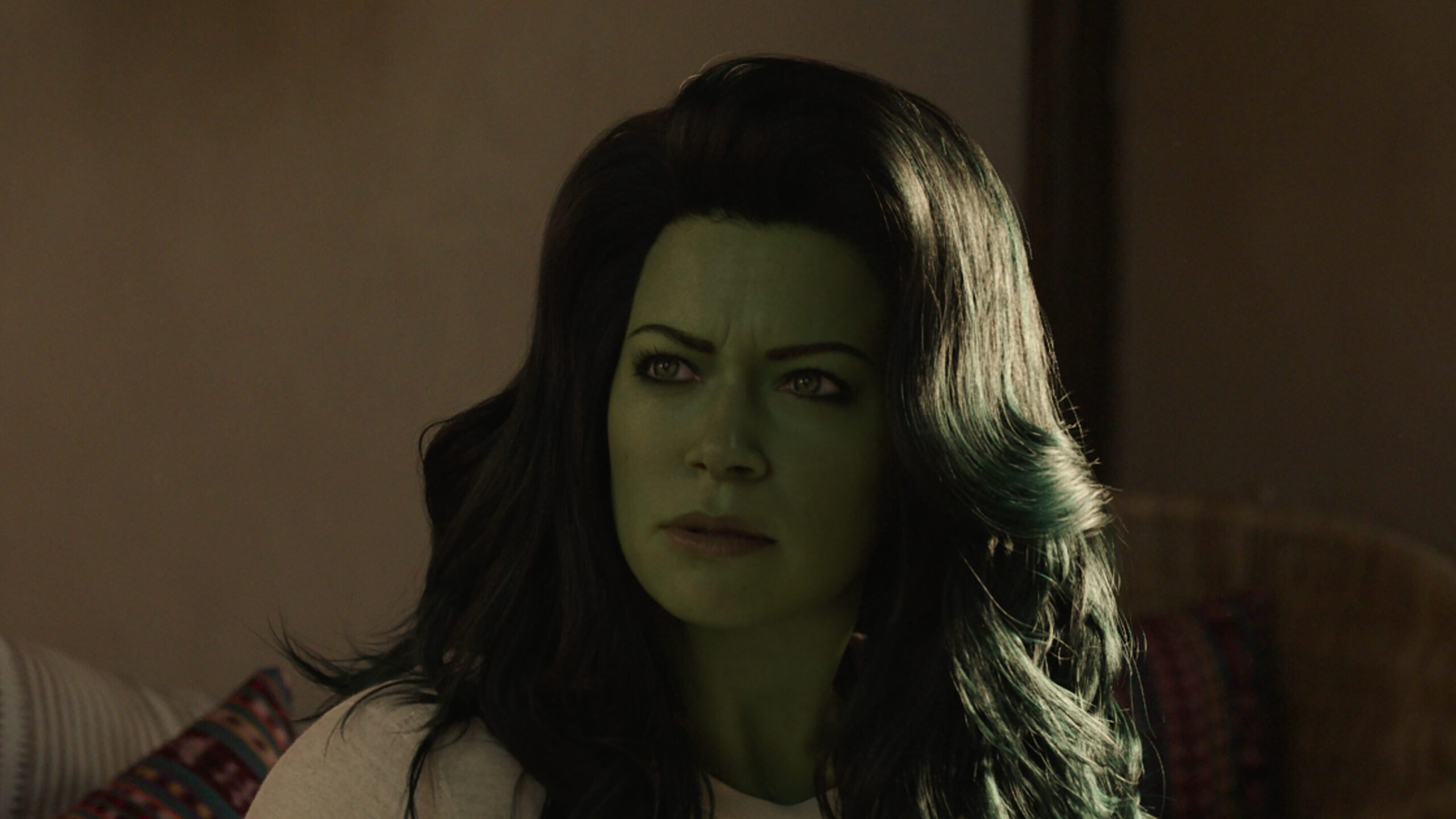 Angry, short-tempered, and a desire for rage. The feelings of the Hulk family are exactly how every Marvel fan should feel after witnessing Tatiana Maslany take the stand in her first appearance as Bruce Banner’s gamma-radiated infected cousin Jennifer Walters, the She-Hulk. It is not an unpopular opinion that Marvel Studios hasn’t been firing off on all cylinders with its recent slate of Disney+ shows and Hollywood films as part of its fourth phase of MCU projects. While many fans may be hoping She-Hulk: Attorney at Law will miraculously be the next surprise hit like Ms. Marvel, the premiere episode fails to make any case for itself. She-Hulk: Attorney at Law fails to do its titular lead any justice as it comes off as anything far from the Marvel Cinematic Universe’s first successful endeavor into a new superhero sitcom genre.

Through a half hour of incompetent and uninspired storytelling, the audience is given no reasons to care for what is going on as She-Hulk explores a hero with zero flaws and eye-roll-worthy humor. The show is constantly presenting itself as a blend of Marvel Studios’ worst recent shortcomings. She-Hulk brutally suffers from a bland and unrelatable heroine lead, a weightless narrative, and downright sloppy editing that can at times feel as if the entire production lacks professionals. Even with a fan-favorite returning Avenger on standby, She-Hulk: Attorney at Law is unable to provide any saving graces.

She-Hulk: Attorney at Law’s premiere introduces audiences to the titular superhero She-Hulk, the Hulk’s cousin Jennifer Walters (Tatiana Maslany). When Jennifer is taking a drive with Bruce Banner (Mark Ruffalo) one day, the two get into a car crash as a Sakaarian ship attempts to stop them in their tracks. After Bruce Banner’s blood finds itself on Jen’s own cuts, the ordinary lawyer is infected with the Hulk’s DNA and is able to transform into what the media and public later dub “She-Hulk.” Desperate to get back to her normal life, Jennifer agrees to stay with Bruce as he conducts several studies on her to test her new powers.

Every superhero has their origin story, but She-Hulk sloppily spends its entire first episode going over how Jennifer Walters gained her powers and nothing else. While this type of story can certainly justify the need to take up an entire episode–especially one that is just a little over thirty minutes in length–the rest of She-Hulk’s premiere is focused on how she compares to the Hulk. In contrast to Marvel’s other shows on Disney+, She-Hulk spends no time developing an overarching narrative or setting the stage for its main character’s journey. It unwisely chooses to draw superfluous comparisons to show how powerful Jennifer is as she goes from scenario to scenario, montage to montage. Packed to the brim with flat jokes and very few laughs that had already been in the teaser trailers, it won’t take viewers long until they start questioning why they should care for She-Hulk as a character.

Like a lawyer in any courtroom, making a valid argument for your defendant is arguably the most important task you can do. Marvel Studios falls short of creating a solid argument as to why any viewer should be invested in She-Hulk’s story. Jennifer Walters is shown as a flawless character who lacks any relatable traits outside of wanting to question Captain America’s personal life. It is hard to get a grasp over who she really is, and the situation she is suddenly placed in barely affects her attitude.

From its reveal, Marvel Studios has called She-Hulk a new type of “superhero sitcom.” The show is supposed to bend the genres of drama and comedy together with that of a superhero origin story. What She-Hulk’s premiere lacks most is the heart and soul that has already made this genre successful–in fact, Marvel Studios was the one who already made this formula a skyrocketing success. While the characters may be comparable to apples and oranges, Deadpool is a fourth-wall-breaking comic adaptation from Marvel Studios that knew how to balance its humor and characters. Deadpool was made hysterical and emotional because of how he was able to communicate with the audience. Ryan Reynold’s anti-hero is as charismatic as he is interesting. Both the Deadpool films set up a situation that not only keeps the audience constantly laughing, but it sets up a sense of intrigue for Wade Wilson himself.

If She-Hulk has no internal or external conflicts to deal with, why should the audience care about her?

In its premiere, She-Hulk: Attorney at Law lacks the drama and stakes that could make the heroine’s story enticing. Building a female character to look impressive next to her male counterpart is okay, but making her practically invincible and emotionless in her situation makes her neither a relatable person nor someone to worry about. Her acceptance of dealing with her newfound powers is ridiculously fast and is given no time to properly develop. Sure this may come into play later in this season, but for an opening episode, it creates a lack of a hook for the audience. By the end of episode one, the viewer has nothing to go off in terms of questioning where She-Hulk’s story may go next or how she will deal with any of her potential internal or external conflicts.

After spending so much time on a shallow origin story with no intriguing questions or mysteries to look forward to, the show ends off on an unfulfilling note as Jennifer finally returns to her office for a low-stakes action sequence that quickly cuts between shots and more jokes. While this scene is supposed to set up her big mistake that will change the rest of the season, the moment is given no weight or suspense despite so many perfect opportunities to do being handed out before. Had the first episode been about Bruce convincing Jennifer of the dangers of being the Hulk in the public–or rather having Jennifer care about the consequences Bruce faces–the ending would have a major payoff.

Amidst a weak narrative, She-Hulk: Attorney at Law suffers from a problem even greater than its lack of ability to establish a captivating superhero story or consistency to keep viewers interested in its characters: the way it is constructed and framed. The show’s editing can be extremely awkward and cobbled together as it practically flashes between quick scenes and one-liners. The first episode of She-Hulk is without a doubt Marvel’s worst project yet when it comes to editing. The whole production feels as if it is rushing to a finish line under time constraints, yet there is no clear goal planned out. The show’s entire flow rarely works from scene to scene as it never gives Jennifer and Bruce time to breathe or develop. Most embarrassingly, there are so many scenes that have been evidently cut early to save time.

Even worst though, Jennifer Walters has no reason to break the fourth wall and communicate with the audience. In the first episode of She-Hulk, Jennifer breaks the fourth wall for the sake of a layer of comedy and explains her story so far. Not only does the humor not land, but her story is given no reason to be told in this way. When the She-Hulk comic books had the character constantly breaking the fourth wall, there was a narrative purpose in doing so. The monologues and callouts built upon the character’s journey and her connection with the reader. Perhaps this will change in a future episode, but so far She-Hulk’s usage of the performance convention is obsolete and meaningless.

After a weak start, She-Hulk: Attorney at Law is going to need quite a powerful rebuttal with its second episode if it wants to get audiences interested in Tatiana Maslany’s character and her placement in the Marvel Cinematic Universe. She-Hulk’s overarching narrative needs weight, meaning, and a clear goal if it wants to proclaim itself as Marvel’s most successful television lawyer–it cannot rely on the shoulders of the Hulk or other Marvel veterans to keep its story moving. Even after a weak start though, there is hope that perhaps this series can get off the ground and fix many of its issues–and hey, at least the computer-generated effects and performances are bearable in comparison to some of the early trailers.

Amazon’s All or Nothing: Arsenal – A Slick Look at a Team Gunning for Glory