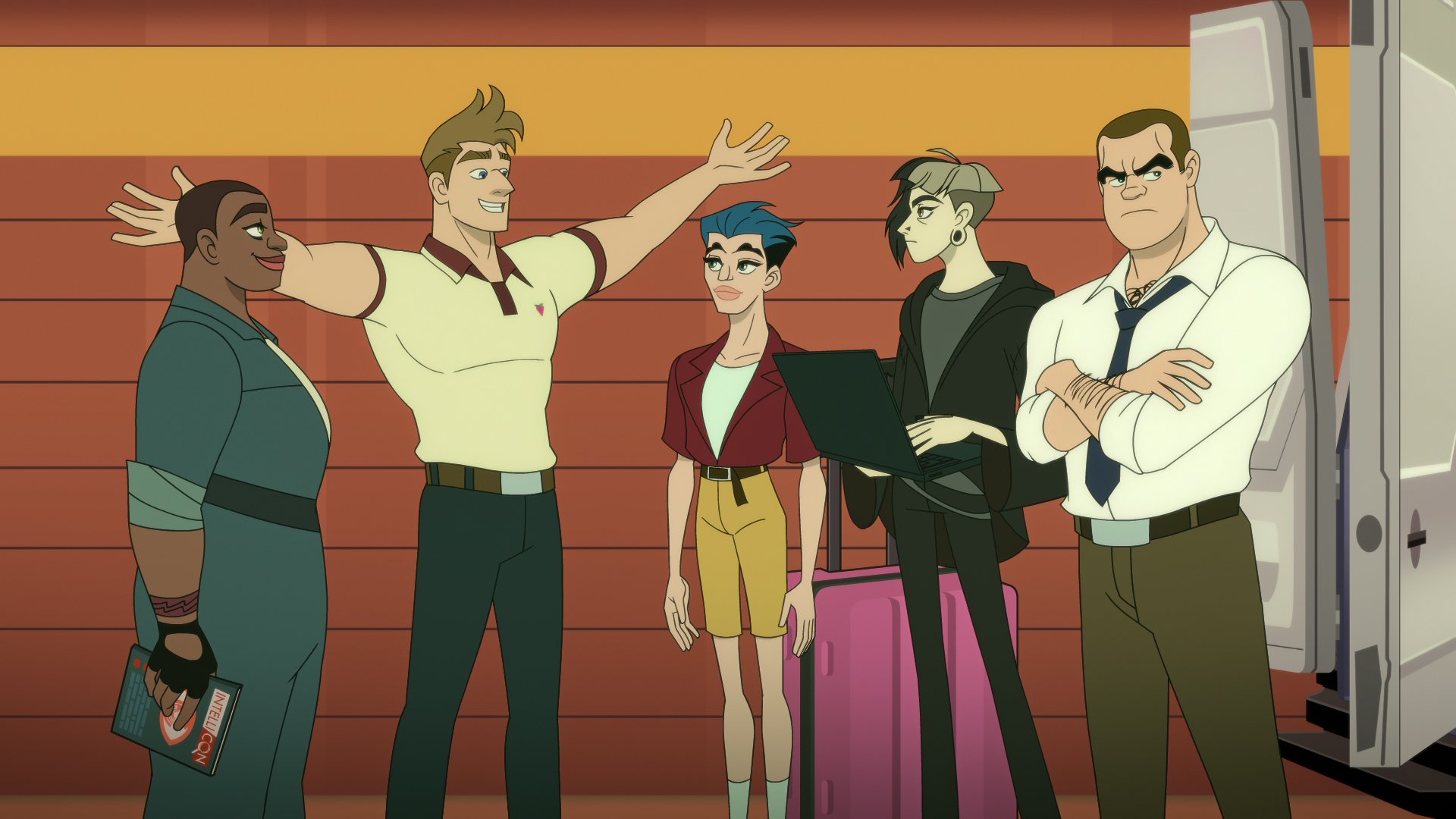 While too many shows are queerbaiting and employing the Bury Your Gays trope, Q-Force is celebrating queerness and putting gay characters front and center. With a hugely talented voice cast voicing characters that are written beyond the stereotypes while still sprinkling in those stereotypes with comedic prowess, Season 1 of Q-Force is a force to be reckoned with. Characters, plotlines, and arc are all well-developed creating an exemplary first outing that feels cohesive and satisfying.

That’s not surprising considering the creators are Michael Schur, purveyor of numerous comedy hits, and Sean Hayes, who played the iconic Jack McFarland on Will & Grace. Hayes also voices the main character, Steve Maryweather, or Agent Mary as he is so often called. It begins with Maryweather graduating from the AIA Academy as valedictorian, but when he comes out in his speech, vowing to serve his country with all of his “big gay heart,” the homophobic head of the agency banishes him to head a lowly division that was never intended to see any action in West Hollywood, California.

WeHo is the perfect setting for Steve and the ragtag yet highly skilled and capable crew of spies that he has personally recruited. Deb (Wanda Sykes), a happily married lesbian and mechanical extraordinaire, is the mom figure of the group (as well as dog mom to 16 rescue pitbulls). Stat (Patti Harrison) is the resident hacker and computer wiz who exudes a very cool Lisbeth Salander vibe. Twink (Matt Rogers) is a master of disguise thanks to his drag queen expertise. V (Laurie Metcalf) is the agency’s Deputy Director put in charge of Q-Force, and while she is a steely, commanding boss she is an ally, championing the squad and putting herself on the line for them.

After 10 years of languishing in a garage in West Hollywood, the team’s morale is low, so Mary decides to go rogue and find themselves a case to prove their worth. With V’s help and the condition of having a babysitter, Q-Force is upgraded to new office headquarters (in the Pacific Design Center, no less) and is assigned missions. This much-deserved promotion takes them on adventures spanning the globe, from Tarzana and Palm Springs to Wyoming and the European country of Gyenorvya.

Yes, that is a riff on Genovia of The Princess Diaries, which is just one of so many niche pop culture references.

There are criticisms of homophobia, naturally, but also on misogyny, sexism, toxic masculinity, and mental health all packed into the witty dialogue and humorous scenarios. Several mentions of Pride being exploited by corporations and commercialized touches on a current, contemptible trend. Romantic relationships and unique friendships develop all while the team engages in top-secret espionage and deals with discrimination within their own organization. One storyline that carries through most of the season uncovers a high-tech conversion therapy being used against the queer spies that came before the agents of Q-Force.

Thankfully, there are more and more gay characters popping up in animated shows, and being centered on as well. Q-Force takes that a step further and focuses on an entire group, their queerness, and their advocacy for the gay community.

And it’s hilarious to boot!