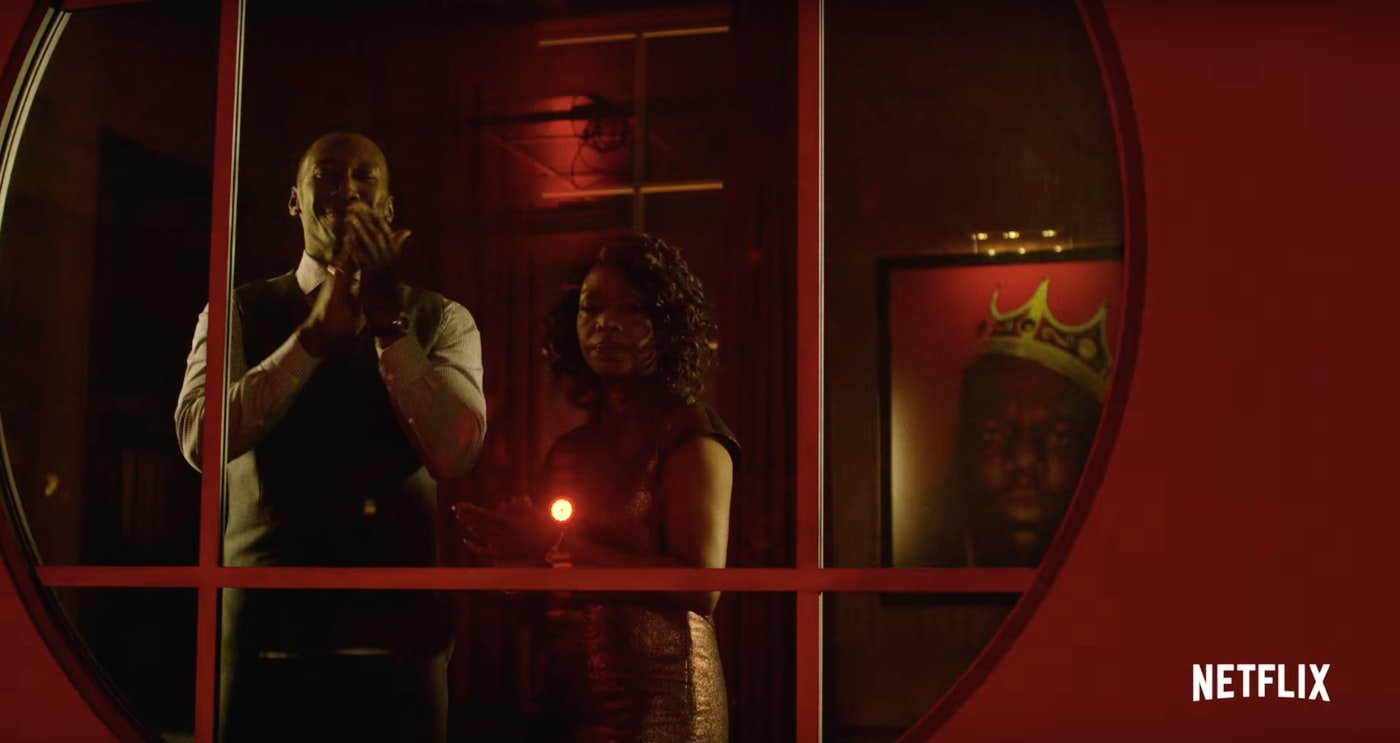 If you haven’t seen Luke Cage, I don’t wanna ruin it for you. It’s great; go watch it. But if you want an excuse to rewatch it, let’s talk about what makes Luke Cage a ghost story for this Halloween Season.

Imagine in the Marvel Universe a borough in New York that is haunted. In fact, this borough is so haunted that everyone is either possessed or dispossessed by the King Ghost. The King Ghost is written into their literature, their history, and if anyone wants to wish ill or harm on another subject in this haunted Borough, they simply speak the name of the King Ghost of Harlem, “Nigga.” Here we having the setting for Marvel’s Luke Cage. It is a setting that we are actually incomprehensibly familiar with, and to some extent, that’s what makes this world so fantastic.

But in this world, there is a small resistance—so small, in fact, that by the end of the first season of the show, you aren’t sure they’ve really done anything, or if they are even going to survive. That resistance is the trio of Luke, Misty, and Pop. There are several instances in which Luke pushes back against “nigger” (and it’s colloquial equivalent, “nigga,”) being used to name him or those around him, the most notable being a scene in front of the Crispus Attucks Community Center. Pop and Misty, who never speak the name, are also painted as unequivocally positive roles in the show. You can almost draw a line in the show between which of the black cast mutters the name of the King Ghost, and find an accurate line up of heroes and villains.

But Luke Cage isn’t just a show concerned with a word for a word’s sake. The storied locations, from the Community Center to the Jackie Robinson Park,speaks of a word that seems to be at the heart of the motivations of just about every character, hero or otherwise: Legacy. And the “King Ghost” has a Legacy all its own: supplanted with meaning and connotations by generals, authors, scientists, politicians, musicians, and historians alike, the word “Nigger” (and it’s colloquial equivalent, “Nigga”), in its critical prominence, written in column inches in the US’s papers, was used truly as a form of arrest of value, community development, legal and scientific recognition, and institutional rationalization. By the time Luke Cage’s (or Mariah Dillard’s) Harlem arrives, the word has already done its work, ravaged by the drug cartel and the subsequent war on drugs and skyrocketed prison population.

And thus, Luke Cage’s story with Harlem becomes what most American Horror Films and Black Literature depicts in excruciating detail: a battle for the Soul. The Crown is significant to a story with themes of Haunting.

To imagine a ghost story on this sort of scale, Derrida’s “Specter,” made famous of his revisiting of Marx-Engel’s socialist ideology after the fall of USSR, lends itself as a useful model for the exercise for understanding the nature of racial politics as they manifest in Luke Cage. The Specter is essentially a figurative ghost, one that exists to illustrate that an ideology, like communism or racism, does not truly die with an event like the demise of the USSR or one black first family. Derrida states that the ghost goes on to haunt the living, terrorizing them while they are alive with a lurking, decentralized source of conflict and violence. But what is most important is that Derrida states that none are in more danger than those who state that the ideology or practice is dead.

After all, racial fear is woven through out the entire legacy of King Ghost. The end of the outward practice of non-blacks mentioning the King Ghost’s name did not fully kill his machinations, but remake his rule into one that could no longer be addressed in a centralized, focused discussion. And so, the King Ghost’s work continues, erasing histories, celebrities, opportunities, access to resources, and eventually whole populations.

It is a battle in which so much is at stake, the battle itself doesn’t exist in just one register; arenas range in scope from community politics and relations to the wielding of language itself. Luke Cage’s players engage in this batter by remembering their honored dead, discussing literature and sports and music, and showcasing and reveling in the present. As a collective narrative, “villains” and “heroes” alike come together to build the community, to grieve their dead, and honor truces (the successes of these endeavors, well, have varied outcomes). Even though they come for each other’s blood and out-maneuver one another with deadly consequences, it is ultimately about more than any one character’s personal ambition. It’s something which constitutes a collective suffering. There is something undeniably “public” about the characters on the show, these two most of all.

If there is one motif that shouts louder than the dizzying number of literary, musical, sports, and philosophical references that make up each episode of Luke Cage, it’s the question of the name. Not a huge surprise, considering that the King Ghost’s power is evoked by others speaking his name. Yet every major player in Harlem doesn’t just have the name of King Ghost to worry about—they also have their own multiple names to contend with.

Luke, an on-the-run ex-con/ex-cop, is under constant threat of being found out as “Carl Lucas.” Henry Hunter, aka “Pop,” undergoes the work of remaking his name from the sounds his fists made to a fatherly figure over the youths of Harlem. Cornell Stokes is at constant war with the name “Cottonmouth”; Mariah has all but banished the ominous “Black” from her moniker, so that only Cornell knows about that chink in her armor. “Misty” is aloof with her legal name, “Mercedes.” Hernan Cortes revels in the anonymity of “Shades,” And Diamondback, who seeks to possess the last name “Lucas,” tries to shed “Willis Stryker” with Cain and Abel’s help.

There is something in the possession of multiple names that haunts every character. For a number of them, it is something they run away from, a struggle of self-determination separates them from the name that was placed on them without consent. This device is hard to ignore in the presence of the word that is placed on an entire community, and then peddled to the world over in regards to that community. The same word that threatens to be spoken on everyone’s lips—“Nigger.” A misty night for Misty Knight.

Luke Cage isn’t just a ghost story; it is a story about ghosts. Despite what everyone is told about Cornell Stokes feelings about being called “Cottonmouth,” only his sister respects his desire not to call him Cottonmouth. The name “Black Mariah” is muttered once, but it rings out through the rest of the season as Mariah’s dark descent into crime consumes her. We are left to speculate about the name “Mercedes,” but would it be so impossible to imagine workplace politics as a deciding factor to go by the less-ethnic “Misty?” Whatever the struggle, these struggles for self-determination are highlighted in a register that simply does not exist for non-black people who do not have a name that would be better off dead.

As we contemplate naming and its progression to identity, we arrive at the question of legacy. Ultimately the characters of Luke are incredibly public individuals in a fight for legacy—whether it is business ownership, community relations, or a pursuit of justice, the characters are all looking for some real way to steal back their borough from the King Ghost. The King Ghost cannot simply be killed, because it’s already dead—it must be disempowered and banished. The word “Nigga” cannot just become “the N-word”; the era of Racism doesn’t end just because we say so. Global anti-blackness must be undone, communities need to be given economic opportunity and educational equity. Legacies have to be honored, dignity restored, opportunities afforded, and literature recognized.

But maybe the only way that can be done is Luke’s way—negating the physical erasure of death and the linguistic erasure of the word “Nigger.”

So what’s in a name?

Why, that’s the ghost of the matter.

Breaking Up With The Walking Dead

Nostalgia At The Heart Of ‘Pokemon Generations’