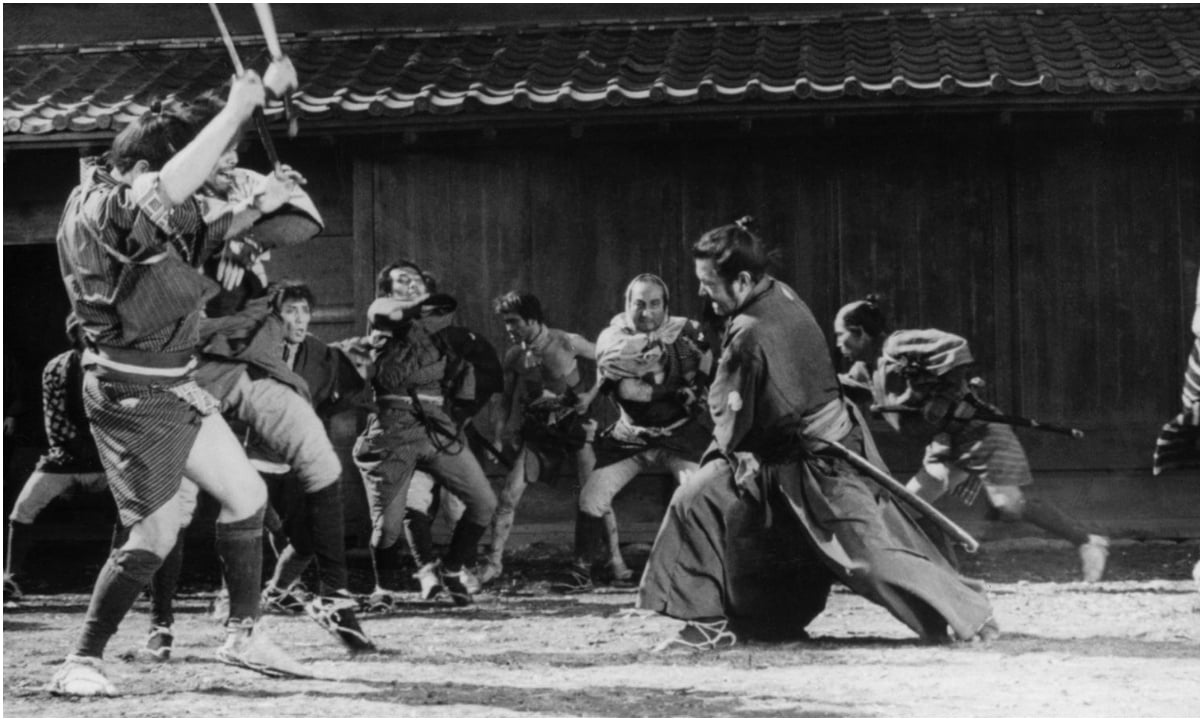 It is the mid-19th century in Japan as a wandering ronin (the term designated to samurai who no longer have a master to follow), Kuwabatake Sanjuro (Toshiro Mifune), roams the windy, autumnal countryside, unsure as to the direction he should head next in search for food and money. Gambling on one particular route takes him to a small town awash in corruption and gamesmanship between two warring factions, one commandeered by Seibi (Seizaburo Kawazu) and the other by Ushitora (Kyu Sazanka). Each has associated itself with one of the two major industries the sullen town calls its own, a sake brewery run by Tokuemon (Takashi Shimura) and a silk factory owned by Tazaemon (Katamari Fujirawa). Despite the consternation and warnings of a local tavern owner, Goji (Eijiro Tono), the ronin sees a window of glorious opportunity to make serious bank and have a grand time at it by foxily sowing the seed of everyone’s destruction while offering up his services as a yojimbo (bodyguard).

Akira Kurosawa is known as one of Japan’s great cinematic exports, if not the very greatest. Dabbling in drama, historical epics influenced by the works of William Shakespeare, and entertaining romps replete with unforgettable characters and splendid adventure, his career spanned six decades and earned him the sort of reputation most directors will only ever savor in their dreams. Yojimbo, while not an outlier in his filmography, is one of his more straightforward, non-epic samurai films, a movie more concerned with the small-scale adventure of a clever if self-serving masterless samurai who singlehandedly cleans up a town sick by death, decay, and corruption. Balancing action, suspense, and comedy, Yojimbo is one of Kurosawa’s simpler adventure films, an extremely watchable romp that goes down smooth.

It is the aforementioned genre blend that has inspired people to cherish the film for over five decades. Yojimbo is never just one sort of movie but a great many rolled into a single package. Despite its multitude of layered tones, the movie is not convoluted nor is it complex. Kurosawa was a master of his trade, a man with the Midas touch. He knew what he was doing when he walked on the set when working in pre-production, when calibrating the performances of his actors, etc. There is nary a moment in Yojimbo that feels off, the merits of which can be the subject of intense debate. Kurosawa’s style may be divisive, but it is entirely his own.

Yojimbo is supreme entertainment under the guidance of the sensei Kurosawa

For the uninitiated, the comedic aspects are courtesy of amazingly exaggerated performances. Wild cries, rambunctiousness, and agitated and nervous individuals: these are but some of the signature ingredients utilized whenever Kurosawa aims for laughs. Understandably, this style is not everyone’s cup of tea. That said, it is difficult to not appreciate the dedication of his cast. One such example is the town’s lone police officer (Ikio Sawamura), who behaves more like a clown or a jester than anything else throughout the picture, which can be a bit off-putting at first.

For all the various characters and plot elements the director has to juggle, Yojimbo is an impressively economical enterprise. Much like the titular bodyguard, the movie clicks along at a breathtaking pace, introducing new players by the minute, each one clearly drawn out, albeit mostly one-dimensional, with Sanjuro plotting his way into the always temporary good graces of either Seibi’s or Ushitora’s band. Even if non-Japanese viewers get confused by the dozens of character names, each of their faces and expressions is instantly recognizable, smoothing the process of taking in so much information. True enough, the majority of characters are exaggerations rather than three-dimensional individuals, but that is part of the fun. The lively performances are what help define the world the story takes place in.

A lot can be written about frequent Kurosawa acting collaborators Takashi Shimura, Tatsuya Nakadai (who plays a pistol-wielding maniacal gangster associated with Ushitora), and the many other supporting players, but the one who will always be mentioned in the same breath as the director’s name is Toshiro Mifune, who played in a whopping 16 films by Kurosawa. In Seven Samurai and Rashomon, his roles are those of loud, cantankerous balls of energy, whereas Yojimbo sees him play a different sort of rascal. His Sanjuro speaks very little, preferring to let his mind and sword do the talking. Having once proven his worth, people listen anxiously whenever he does open his mouth. For those who have seen Sergio Leone’s A Fistful of Dollars, an extraordinary remake of Yojimbo, Mifune’s performance will have viewers recall Clint Eastwood’s work in the aforementioned western. Sanjuro is a man of action, not of words. He may not act immediately, preferring to size up the situation at hand, but when he sets his plan in motion, he is as ruthless as he looks. Despite his rough-looking exterior and the swiftness with which he cuts down his foes, the film does make sure to reveal that beneath his grim mug is a conscience, demonstrated in the sequence when he risks his life to reunite a kidnapped woman with her young son and meek husband despite that emotional men ‘disgust’ him.

One aspect of the film that must be highlighted is the beautifully fluid camerawork. Working with cinematographers Kazuo Miyagawa and Takao Saito, Kurosawa’s camera is cinematic candy. The wide lens allows for tremendously handsome, communicative shots of the town’s main street where the two rivaling gangs frequently have standoffs. Sanjuro will sometimes sit atop a watchtower located in the middle of said avenue and witness the comically inept posturing of both gangs, the frame brilliantly set so as to capture Sanjuro and the gangs in a single frame. Depth of field is extraordinary as well, with many scenes featuring a small party of characters conversing in the foreground while others, clearly visible, approach by foot from far away, like in the rain-drenched scene when Ushitora and the giant Kannuki (Namigoro Rashomon) can be seen through a tavern’s walls walking towards the establishment where Sanjuro and Goji are talking. Finally, there are the smooth camera pans that minimize edits. Very often, a shot will commence in a specific location to capture whatever information needs to be communicated, but rather than cut away to something else that grabs a character’s attention, the frame will simply glide to the left, right, up, or down. It is an example of calculated filmmaking of the highest order. There is nothing inherently wrong with relying on edits (the magic of movies is largely due to good editing, after all), but when a director can find another solution to the issue of adding information into a scene that avoids rapid cuts, a solution as attractive and effortless as the one employed in Yojimbo, it deserves praise.

Yojimbo is not an action-packed film, with most of the hacking and slashing occurring in brief spurts, but let that not discourage viewers from checking this most amusing of adventure films. Impeccably crafted, featuring a memorable anti-hero and a dastardly villain in Tatsuya Nakadai, Kurosawa’s first effort to feature the character of Sanjuro is nothing if a lot of fun.

Let Me In vs. Let The Right One In