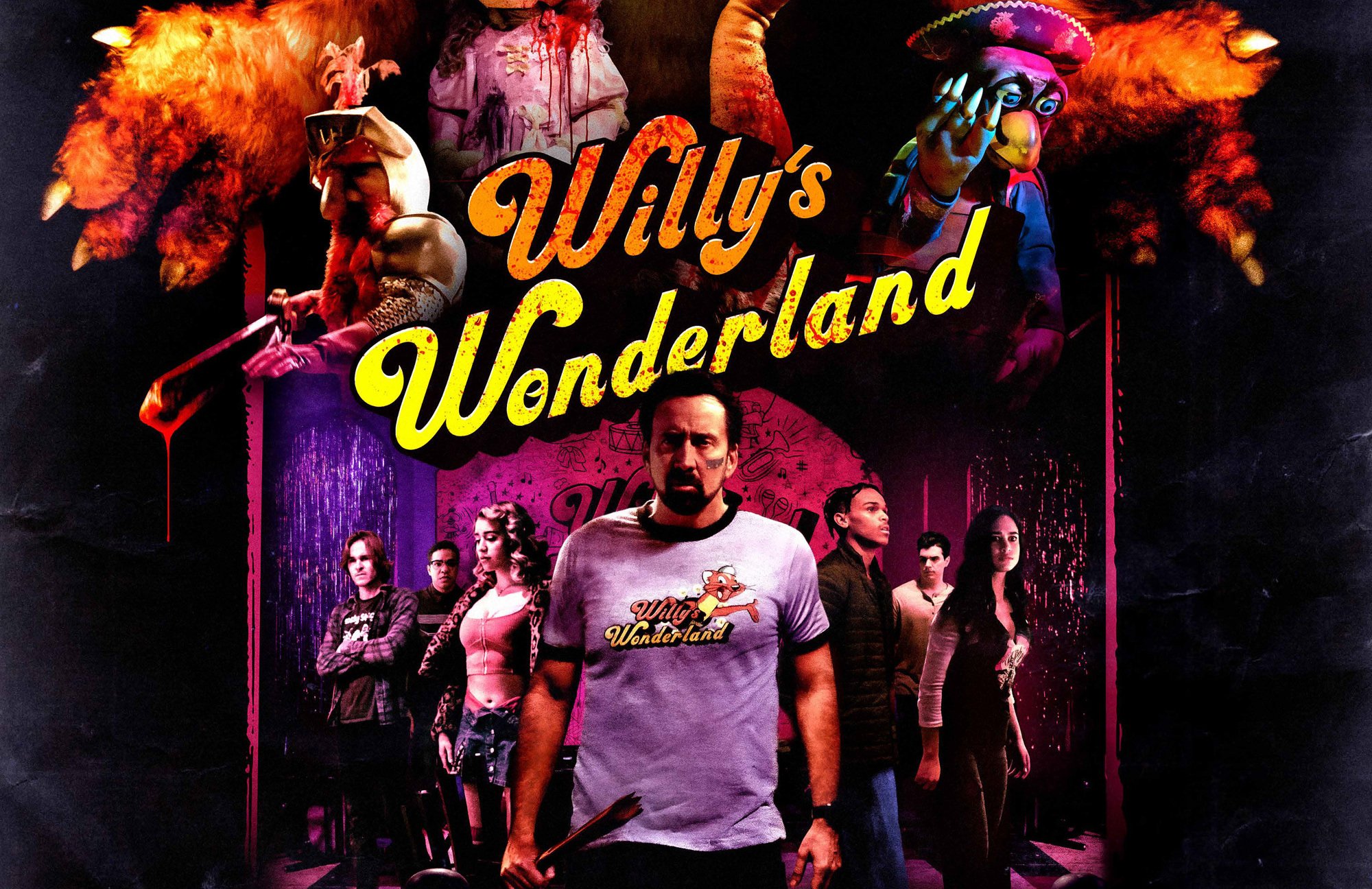 On paper, Willy’s Wonderland is the exact kind of schlock that any horror fan can get behind. Conjure up memories of going to Chuck E. Cheese or any off-brand variation of animatronic puppets serenading children on their birthdays and it’s hard to shake how disturbing the concept is in hindsight. Video games like Five Nights at Freddy’s have mined a lot of the horror out of that bit of nostalgia, but Willy’s Wonderland plays out more like a revenge fantasy on your childhood nightmares as Nicolas Cage mercilessly eviscerates a group of animatronic puppets in between swilling beers and playing pinball. Despite a very haphazardly put together and cheap-feeling film, it’s hard to disparage Willy’s Wonderland as it delivers its promise of puppet murder with glee and makes excellent use of its prolific star.

There are so many ways to use Nicolas Cage in a movie, but Willy’s Wonderland feels surprisingly commendable in its understanding that its premise alone is enough to build a foundation for Cage to shine, without any of his usual outbursts and over-the-top deliveries. Playing an unnamed, silent drifter passing by the remote town of Hayesville, Nevada, Cage’s car ends up breaking down and needing repairs. Short on cash, he agrees to spend the night alone cleaning the abandoned Willy’s Wonderland in exchange for his vehicle to be fixed. Meanwhile, the rest of the town is very much aware of the Hell that Cage is stepping into, and a group of teenagers are planning to stop the animatronic puppets inside once and for all.

What the teens soon realize is that Cage isn’t going to be murdered by the animatronic puppets inside – he’s going to kill them all. In between actually cleaning the establishment, one by one the various characters inside Willy’s Wonderland try to kill the drifter, only to find their victim more-than-ready to take them on. Uttering no words, Cage feels more like an unstoppable force than he has in recent memory. His performance is astonishingly restrained, only letting out brief moments of emotion during his gleeful tearing apart of Willy and his friends, and the glee he gets from playing pinball. While the script doesn’t necessarily do much to illuminate his past, the performance brings this feeling that Cage hasn’t accidentally stumbled upon Hayesville and just so happened to be really good at killing things – instead, it feels calculated and intentional. “He’s not stuck in there with them. They’re stuck in here with him” one of the teenagers realizes after seeing the silent protagonist tear through puppet after puppet.

Willy’s Wonderland is a constant source of failed potential, even down to its action scenes.

Even with Cage delivering a character that elevates the film’s silly premise, it’s hard not to be disappointed with almost everything else surrounding Willy’s Wonderland. The teenagers are just your standard group of teenagers in a horror film, ultimately serving no purpose except to deliver an exposition dump to Cage who doesn’t seem to care about why the animatronics have a taste for blood. That’s all information aimed exclusively at the audience. It’s all relatively inconsequential though because the plot itself doesn’t seem too preoccupied with the animatronics being alive, it’s concerned with whether Cage will kill them all. There’s really not much more beyond that, which is a shame because the film dangles a town-wide knowledge of what happens to people who go into Willy’s Wonderland, but it doesn’t excavate anything meaningful out of it. It’s a surface-level look at survivors of trauma that never amounts to more than just getting some cathartic revenge.

Perhaps most disappointing is that Willy’s Wonderland occasionally looks great in stills, but almost always looks bad in motion. It has the cheap direct-to-video feel to it that you can glean from the trailer for the film, but it really doesn’t hit until watching the movie waste its great lighting, special effects, and vibrant colors. It’s unfortunate that the level of craft on display is lessened in the final product. The design of Willy’s Wonderland isn’t incredible by any means, but it succinctly captures the essence of the family restaurants and the puppets in particular are pitch perfect. While distinct from another physically, the screenplay fails to realize the prospects of making each one stand out beyond their appearance with the exception of Siren Sara.

Willy’s Wonderland sells itself short by failing to capitalize on its potential.

Willy’s Wonderland is a constant source of failed potential, even down to its action scenes. Cage gives a great performance that taps into a seething anger and lust for revenge without going too over-the-top. However, the movie is at odds with it because the premise of the action scenes is inherently preposterous. There aren’t any particularly memorable kills, which seems like a missed opportunity, and the action itself isn’t really engaging. It’s all down to Cage selling it, which he does effortlessly.

It is difficult to say Willy’s Wonderland is a good movie, but it’s just competently made enough that it manages to deliver on its promise: Nicolas Cage killing animatronic puppets. There’s never a feeling that the movie wants to do more than that, and unlike other films that promise something but only give a little bit, Willy’s Wonderland manages to actually sustain itself throughout its brief runtime and provide plenty of Cage slaughtering puppets. It’s in the potential of the film and everything around the set pieces that the disappointment lies. While a great vehicle for Cage to show his prowess as a performer, Willy’s Wonderland sells itself short by failing to capitalize on its potential.

I Care a Lot— Well-acted, but Suffers Thriller Clichés