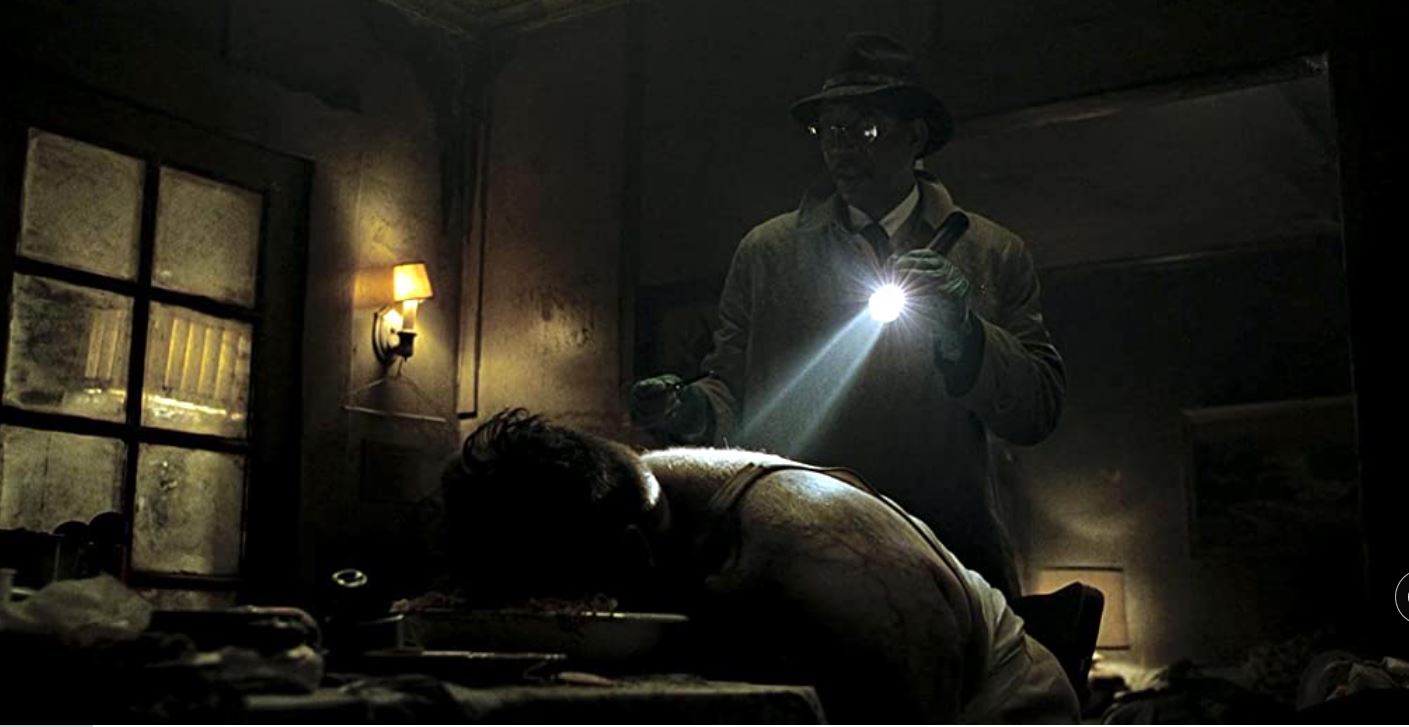 A Look Back at David Fincher’s Procedural Masterpiece

Imagine that its 1995, you and some friends get a screening pass to a sneak preview of a new movie starring “Driving Miss Daisy’s Morgan Freeman and Brad Pitt (Legends of the Fall)”, so you and the rest of the bridge club go see those two nice young men. When the lights go down what unfolds before you is Seven, director David Fincher’s gritty nihilistic neo-noir about a serial killer who tortures and murders sinners based on the 7 deadly sins. The resulting pre-screening outrage from New Line Cinema’s mis-marketing – as director David Fincher tells it on the film’s DVD commentary – results in an extra scene added to soften the film’s ending and gives Seven a reputation as a shocker. In 1995 this was the “f**ked up” movie to see. Not unlike Kiss Me Deadly decades before it, Seven garnered a reputation for its shocking violence and even more shocking ending, but as the years have gone on the film is still alive in our public consciousness, not for its violence but for its craftsmanship and innovation.

Written by Andrew Kevin Walker and filing in at Fincher’s 2nd feature film (after the maligned, better-than-it’s reputation Alien 3), the nuts and bolts of Seven are put together out of a knowing ode to the classic detective film formula. Freeman plays Detective Somerset, the old school cop who is literally seven days from retirement, mismatched with a young hot-head partner named Mills (Pitt). Somerset remains something of an enigma, and when the two are forced together for the usual get-to-know-each-other dinner by Mills’ wife (Gwyneth Paltrow), Somerset explains his life of solitude with a truly wonderful line: “people find me disagreeable”.

Their taxed relationship forms the core of the film and the two are bonded when a mysterious serial killer, known only as John Doe, drags them both through hell for the next week, unleashing gruesome killing on top of gruesome killing in an elaborately orchestrated message to make the world pay for its sins. It’s because of Seven that a generation of non-Christians can rattle off all 7 deadly sins without blinking. Seven is set in an unnamed city drenched with a constant downpour. It seems to take place just on the edge of the end of the world – that is before passing through the looking glass for its desolate post-apocalyptic finale.

You have to know the rules in order to break them and that’s exactly what this film does. It pays tribute to its detective film origins before transcending them. And just when you think you know where it is going, our killer walks into the police station covered in blood and turns himself in. From that point on the movie hurtles forward, leaving the audience without a safety net. Fincher ratchets up the tension beat by beat. As many times as I’ve seen this movie, there is usually a split second during its climax when I hope against all logic that on this viewing the ending might turn out differently.

Trace DNA of Seven can be found in just about every serial killer movie to come along since. Fincher and Walker broke the mold and reset the standard. Fincher’s brash Nine Inch Nails opening title sequence became an immediate classic and has been emulated countless times. The film so thoroughly covers the serial killer genre that it’s hard to get out from under. Third rate detective films that came along since, from The Bone Collector to Suspect Zero to James Patterson adaptations Kiss the Girls and Along Came A Spider, stylistically tried to juice up their cat and mouse games by making them a bit more like Seven. Even a great movie like 2010’s triumphant thrill ride I Saw the Devil has an atmospheric feel that recalls Seven. Even its marketing campaign, in which the letter “v” is pulled, rotated, and reformed into the number “7” has inspired countless horror sequels since.

Probably the most successful movie that owes a debt to Seven is Saw. Saw’s serial killer puts people through elaborate torture traps that dole out poetic justice based on his judging disapproval of how they live their lives. Jigsaw dies and spawns acolytes that carry on his legacy, just as Seven’s John Doe no doubt would have (though thankfully we never had a Se7en T2o). Seven is a far more polished and carefully crafted film though the gritty, grimy settings and worldly cynicism are similar. Where Saw lingers on open gashes with bloodlust, Seven’s horrors live in our heads, often left implied rather than shown.

Earnest Hemingway once wrote, “The world is a fine place and worth fighting for.” I believe the second part.

While Fincher’s film became the roadmap for the procedural cop films to follow, the genre has become almost an endangered species in the years since this film came out. In the last two decades, times have changed. Movies like Seven, Silence of the Lambs or even I Saw the Devil fell out of fashion as audiences turned away, seeking murder mysteries and serial killers not through the widescreen expanses of a theater, but instead via the one-hour self-contained procedural on the small screen. Whether it is reality murder porn on the ID Channel or your average CSI, NCIS or Criminal Minds episode, America gobbled this stuff up by the spin-off. Who needs to delve into a character drama for two hours when crime scene investigators or behavioral psychologists can bust in and stop the bad guy in an hour? Why detail the procedure of police work when the techie chick can run fingerprints through a database?

Stories of serial killers tormenting victims and the cops hot on their trail have been pushed and pulled through every gimmick, psychosis, or fetish imaginable in order to fill out a 22 episode order, show over show, year over year. The self-contained procedural drama became a screaming baby with a bottomless appetite and crime stories were carved down into the junk food we feed it to keep it quiet for an hour. Would a modern audience embrace a movie like Seven? Or (shutter) would they view it as a longer, slower CSI?

Another cultural change came in the form of our villains. The nameless, force of fire and brimstone that is John Doe (played spectacularly in a cameo that will play even more relevant today for those that still haven’t seen it) isn’t seen very often anymore. Instead, we either get the weasel corporate executive who partners with a terrorist group for a “profit”, the vengeful artificial intelligence who decides humans are “the real danger” or the murderous killer who was abused as a kid. Enigmas be damned, now we laboriously over-explain every one of our killer’s motives. Just look at how Leatherface is given a backstory in the remake of The Texas Chainsaw Massacre. Or how six sequels turn Saw’s Jigsaw from the frightening, seemingly omnipotent voice who captures people in his web… to John Cramer, shuffling cancer patient who just wants to get some insurance coverage.

In the years since David Fincher himself has grown and finally garnered respect as a master filmmaker. After Seven he will get Criterion’s attention with The Game, garner a huge fan following with, arguably, his masterpiece Fight Club and Oscar attention with The Curious Case of Benjamin Button and The Social Network. Where his treatment of women in Alien 3, Seven, and Fight Club labeled him a misogynist by critics, he’s gone on to what could be argued as full-blown feminist pieces with Panic Room and adaptations of The Girl with the Dragon Tattoo and Gone Girl. Aside from its ending, if there is a singular classic and imitated sequence in Seven it is the film’s quiet overnight library montage where Somerset pours the periodicals and microfilm while the janitors play Bach. Fincher handles the procedural nature of police work with the same attention as a foot chase. His later films will expand on his ability to make the procedural entertaining, with Jessie Eisenburg writing code in The Social Network and Jake Gyllenhaal solving puzzles in Zodiac turned into bravado scenes.

Fincher has gone on record saying he wants to make movies that will be around in 10 years. This week, this modern masterpiece turns 25 years old and it’s still a thrilling film to unravel. That there are fewer films like it just make Seven all the more precious.

25 Years Later: The Usual Suspects is a Masterpiece of Storytelling