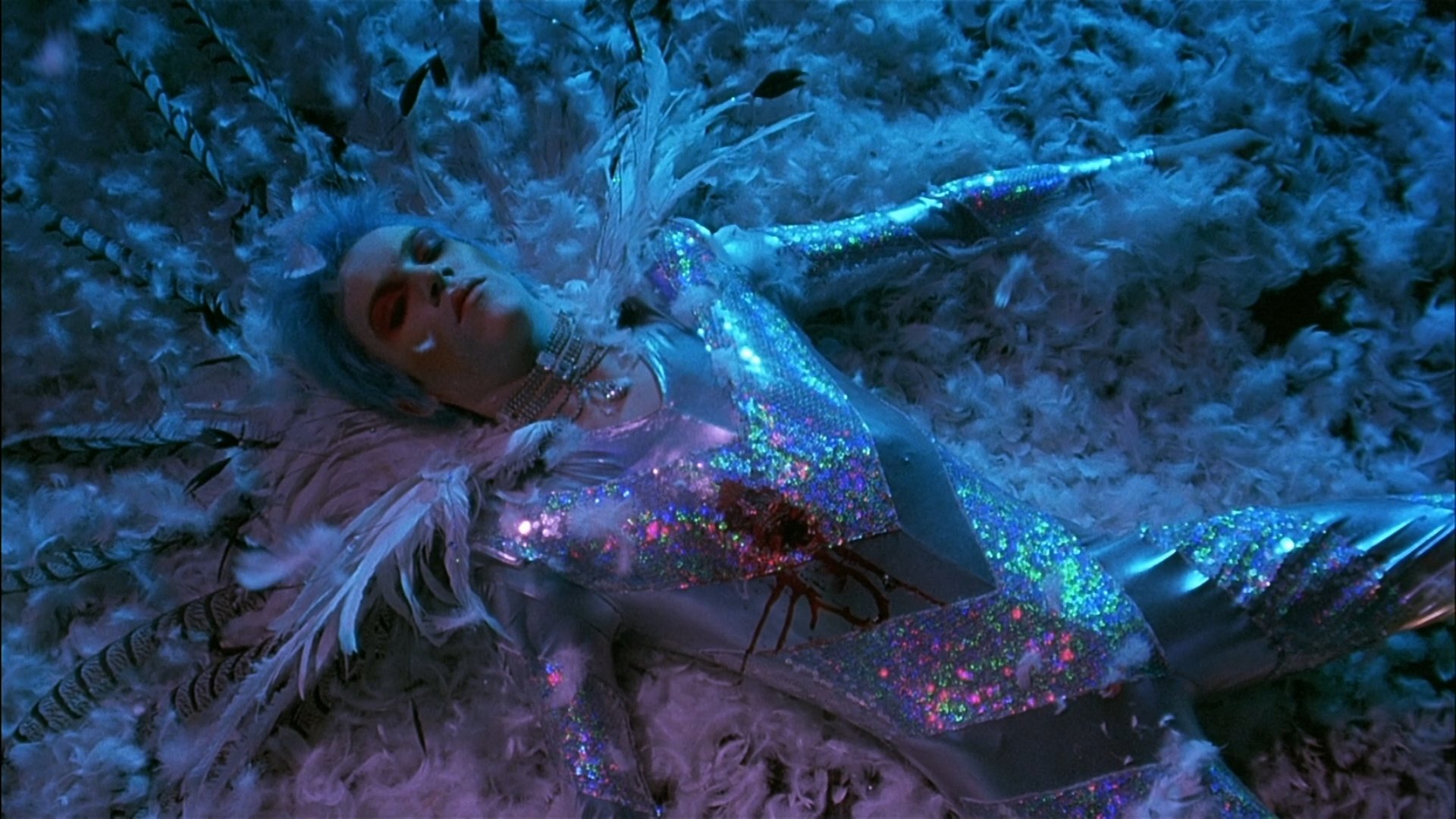 Leave your expectations at the door.

A mishmash of Citizen Kane, Ziggy Stardust-era David Bowie, Oscar Wilde and with a little bit of The Wall thrown in for good measure, Velvet Goldmine is science-fiction, fantasy, biopic and time capsule wrapped into one.

Taking its non-chronological structure directly from Kane, Christian Bale plays reporter Arthur Stuart, charged with investigating the whereabouts of glam-rocker Brian Slade (Jonathan Rhys Meyers) who infamously staged his own suicide ten years ago and then disappeared from public view.

What really sets Velvet Goldmine apart from Kane structurally is Stuart’s hidden past – his own involvement in the glam-rock era – which was, and still is, a source of shame.  It is this embarrassment that fuels Stuart’s search and the film.  Haynes seeks to make his film encompass an era that, for all of its public perceptions, ridicule, and transience, was actually a necessary and cathartic segue time period for a lost and aimless brand of youth, embodied here to perfection via the awkward innocence of Bale.

Velvet Goldmine finds a companion piece in Derek Jarman’s 1978 film Jubilee.  Both films analyze an oft-derided musical and cultural youth movement, set it in a semi-alternate and at times eerily prescient dystopia, and utilize a science-fiction conceit to immortalize the generation. Haynes’ film is far less cynical than Jarman’s. however, and if it is critical of its subject matter it is only so in the participants’ self-destructiveness and not the pervasive chaos that Jubilee claims.

The science-fiction and fantasy elements of Velvet Goldmine are set up in a beautifully bizarre prologue.  As the camera descends from the stars and past vaporous clouds a flying saucer soars by and into the distance.  A title announces the cityscape: “Dublin 1854, birthplace of Oscar Wilde.”  The newborn Wilde is found left on a doorstep, a large jade-green brooch pinned to the blanket.

Fast-forward to 1974, where Brian Slade, a superstar singer with neon-blue spiked hair, fakes his death onstage at a concert leading to the disillusionment of his fans, the downfall of his career, and the death of glam.

Director Todd Haynes uses this jade-green brooch across four different decades – 1854, 1954, 1974, and 1984 – to connect his characters.  The brooch passes hands from Wilde to Slade to Wild to Stuart.  The name similarities are not unintentional.  Haynes seems to suggest that the reputed flamboyance, decadence, and indecency of Wilde did not simply make up his outer appearance, but a true part of his character.  These same traits, present in the three modern-day males, are what will make them as much a part of literary/musical history as Wilde.

However, the anachronistic interpretation of the early 1970s presents a caveat when, during one of his interviews, Stuart uncovers the story of Slade’s rise to fame: his identity and sexuality crises, his deification of Wild.  Having undergone similar adolescence, Stuart is closely aligned with Slade, which puts Wild in the position of a mythical figure.  The film is therefore cyclical, anticipating a new “Wild” to follow Stuart and continue the passing of the symbolic and supernatural green brooch.

Haynes’ eyes are not simply nostalgically misty.  His final reveal of Brian Slade as bleach-blonde, family and politically friendly soft rocker TommyStone hints at an identity that is still uncomfortably shifting and the dangers of the 1970s’ uninhibited lifestyle.  Or perhaps it is a moral for the mortals (Stuart and Slade) who are destined to forever search, while the Wilde and Wilds of the world can disappear into a rock n’ roll sunset.