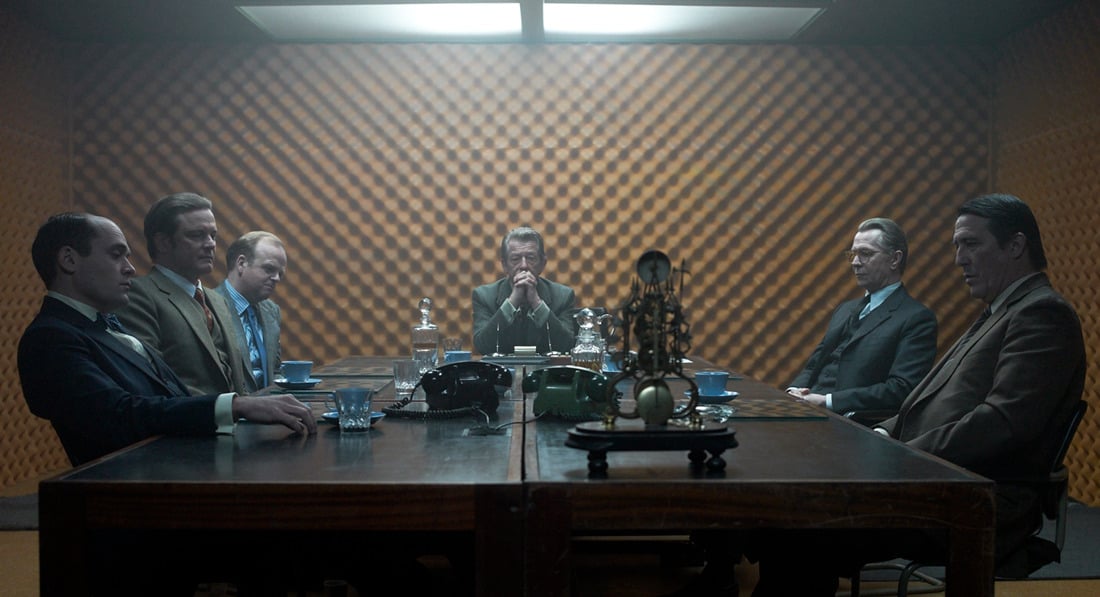 When the BBC screened the hugely admired adaptation of John le Carré’s Cold War novel Tinker, Tailor, Soldier, Spy back in 1979, recent revelations were rocking the British establishment. Anthony Blunt, the Surveyor of the Queens Pictures, had recently been announced as being one of the Cambridge Five, the infamous spy ring of the British elite who were recruited into Russian intelligence shortly before the Second World War. The premise that gentlemen of good stock, whom had been educated at Trinity and other prestigious schools, who frequented the same Knightsbridge clubs and Saville Row tailors as the political and cultural elite of the country could be traitorous cads was a damaging blow to British prestige during the Cold War, a wound that was only partially healed by more recent exposés of the cryptographic triumphs of Bletchley Park which arguably won the Second World War. That notion of a lingering malaise, of an infectious presence at the very apex of the elite establishment, is subtly embedded in the film adaptation of le Carré’s novel, a huge hit critically and commercially, Tinker, Tailor, Soldier, Spy might clandestinely pilfer the mantle of the most impressive British film of 2011 from the vicelike grip of The King’s Speech. Well, if you consider a French-financed film by a Swedish director as British, that is.

London, the late 1970’s. The Circus, the spymaster’s jargon for the highest echelons of the UK’s foreign intelligence service, is formed of five men – the irascible Percy Alleline (Toby Jones) and his three deputies Bill Haydon (Colin Firth), Roy Bland (Ciarán Hinds) and Toby Esterhase (David Denick), all overseen by the senior omnipotence of a man known only as Control (John Hurt). Escalating paranoia and a ‘lack of focus’ appears to have got the better of Control after he orders one of his men, Jim Prideux (Mark Strong) to visit Hungary and debrief a potential defector from the military apparatus, a mission that goes horrendously wrong when he is exposed, shot and captured whilst fleeing the trap. Ousted by embarrassed civil servants on behalf of the shamed Government Alleline has seized Controls throne with his success in running a high-level double agent codenamed ‘Merlin’ who is supplying the West with ‘treasure’, and many of the top-tier of spooks and scalp hunters are pensioned off to make way for a new breed of agent. But something’s afoot, and when the alleged traitor Ricki Tarr (Tom Hardy) returns to England from an overseas assignment his claims of a paralyzing infiltration at the heart of the Circus prompt the civil service masters to convince George Smiley (Gary Oldman), once Control’s right-hand man, to abandon retirement and disinfect the organization, an assignment that brings him into play with his incorporeal KGB nemesis Karla.

In one of the strongest casts that the UK have fielded in a generation, Tinker, Tailor, Soldier, Spy is a tour de force of acting prowess, visual dexterity, labyrinthine plotting and cerebral thrills. The precision with which director Tomas Alfredson, surely one of the most acclaimed ‘new’ directors after this twin triumph with Let The Right One In, invests the film is remarkable, formulating the twin attack of an interlacing and serpentine flashback inflected narrative with a pervading atmosphere of foreboding and brooding paranoid dread. Gary Oldman as the basilisk like Smiley had enormous shoes to fill given the acclaim that Alec Guinness secured for his performance back in 1979, his reptilian turn of quietly watching and waiting is thoroughly enchanting with his measured and controlled movements, never surprised or shocked, shaken or stirred his voice only raises once during a pivotal scene which strikes with the force of neutron detonation. And what support he has, it seems unfair to single anyone out anyone amongst such a dazzling cast but for me, Tom Hardy as the oblique Ricki seals the deal as one of the few emotional glyphs amongst the bluffs and counterbluffs, with Benedict Cumberbatch (with a name like that he must have some relatives in the service?) as one of Smiley’s protégés viewed as a similarly fragile marionette admidst this murky world where no-one can be trusted and nothing is what it seems.

Like the TV series, the film makes no concessions to the audience, there are neither expository scenes nor jargon-defining speeches; quite simply you have to pay attention and keep up as Smiley and his team plunge into a forest of mirrors and counterfeit smiles, with even the specific argot of the spies and their handlers, their language, codes and credo programming an encrypted puzzle that the audience must solve. It’s a world that couldn’t be further away from the globetrotting glamour of Bond, as this sphere of espionage is pungently presented as a parade of overflowing ashtrays, tar stained bedsits, cheap scotch, and thwarted ambition. The colour palette is muted and shadowed without descending into the harsh world of noir lighting patterns, a quivering route that suggests a gaunt realism with a paranoid curlicue, all enforced by a remarkably efficacious sense of period detail, costume, and location. I had some small gripes, firstly that due to the truncated run time the film didn’t have the chance to fully flesh out all the members of the Circus – you could say they were ciphers – which renders the pivotal scene as somewhat anticlimactic, also there is a sense of triumphalism over the final beats (which is itself a brilliantly staged montage) which seem at odds with the previous atmosphere of gloomy speculation, but these are miniscule concerns amongst a superb piece of work, equal to both its TV and literary incarnations.

Beasts Clawing at Straws is Like the Coens in South Korea

Wrapping My Brain Around Mulholland Dr.