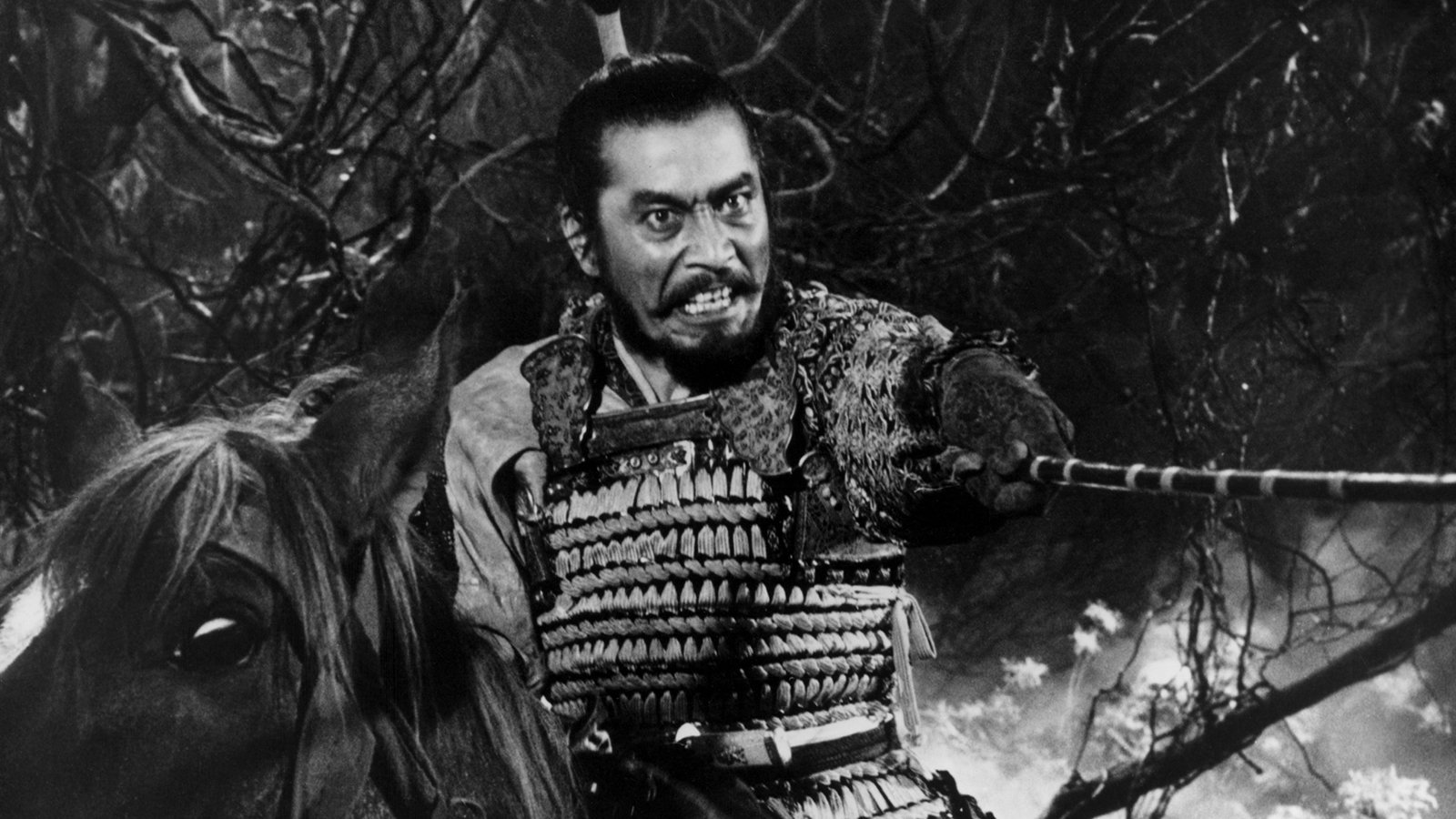 Akira Kurosawa’s name is not only illuminated in the pantheon of Japan’s cinematic golden age, but also in the celebrated annals of film history. After entering the industry with an essay that lambasted Japanese film from a more western-oriented perspective, he worked his way up to the position of director in the 1950s after the nation’s defeat in the Second World War and its subsequent occupation by the United States. Along with Kenji Mizoguchi and Yasujirō Ozu, Kurosawa brought worldwide attention to the nation’s film output, as his western-inspired “Jidaigekis” (Period dramas) established cinematographic conventions that revolutionized the composition of movement.

Kurosawa’s trademark use of the telephoto lens flattened the frame, condensing the spaces occupied by his subjects to lend an intricate set of layering that bolstered the emotional immediacy of a given scene. His use of a deep depth of field rendered background objects just as sharp as those in the foreground, producing epics that still retained a palpable sense of intimacy.

Moreover, Kurosawa was defined by his use of the natural world, employing the elements to heighten the mood and theatricality of his tales. Heavy rain is imbued into the thematic constructs of many of his masterpieces such as Rashomon and the iconic final scene of Seven Samurai. Yet, the natural realm has never been as present as in his first Shakespeare adaptation, Throne of Blood, where the mystic fog is made central in its thematic and narrative potency, effectively becoming a key character within the diegesis of the film.

Kurosawa’s legacy is wholly tied to his position as a definitive figure in the cultural exchange between post-war Japan and the west, namely the United States. His cinematic relationship with the western world is unabashedly evident in the inspiration his samurai epics took from the American Western. At the same time, his work is littered with odes to Vincent Van Gogh and Paul Cézanne, whose emphatic brushwork and contoured forms seep into the layered composition of his screen images.

It’s no surprise this infatuation with the western model of art translated into an interest in the stage. Steven Spielberg, one of the most ardent of Kurosawa fans, called him “the pictorial Shakespeare of our time”, making it even more fitting that his classics emerged from the Bard’s storied work.

Shakespeare’s Macbeth is derived from the act of regicide and other historically contentious events from Scotland’s 11th century, as power struggles among regional lords, dominated the socio-political fabric of the era. In Throne of Blood, this political upheaval fits firmly and boldly into the world of its samurai tale, as Kurosawa mirrors Shakespeare’s ruminations on successional conflict with an exploration of the Japanese Middle Ages (1185-1600), a period defined by a burgeoning desire within samurai lords to challenge the established authority of the court.

Yet, where Kurosawa truly perfects this transposition of Shakespeare is in its integration of Noh theatre into the tenets of the English Renaissance, resulting in an elaborate interplay of western and eastern cultures. The film opens with a Noh symphony of high-pitched wind flutes, harsh stick drums, and tolling cymbals that establish the musical majesty and dark morality of this tale. The symphony is accompanied by a song:

“Look upon the ruins

Of the castle of delusion Haunted only now

Of those who perished A scene of carnage

Now and throughout eternity”.

This opening chant mournfully introduces General Washizu’s (Macbeth) blanketed desire for power and the stark impact of his unwavering ambition. Moreover, the lyrics also touch on the historical cycles of savage violence, as this foreshadowed regal transgression is not made out to be a moment of sudden rebellion (as it is in Macbeth) but an act of inevitability. Washizu’s violent path to power is an unabashed embodiment of the era, as it is later implied that his predecessor also rose to power by killing his lord. From the outset, Kurosawa transforms the Bard’s tale of regicide into an exploration of Japan’s turbulent history, injecting the well-known play with a newfound zeal.

After general Washizu and Miki (Banquo) defeat the rebel forces, they soon find themselves lost in the labyrinthine “Spiderweb Forest” where they meet a demon. Instead of Shakespeare’s famous witches entering the fray, Kurosawa leans into the tradition of Noh theatre by integrating its more folkloric aspects. This supernatural presence comes to Washizu and Miki in the form of an “Onibaba”, a direct reference to the Noh drama Kurozuka (also known as Adachigahara).

The play centers around two priests, who like Washizu and Miki, stumble across the hut of an old woman who is spinning thread. Once the woman leaves to gather firewood, the two discover a pile of bones, realizing that the woman is a demon. They are accosted by the spirit, who they repel through Buddhist prayer.

This intertextuality gives thematic force to Kurosawa’s transposition, as the folkloric mythos of the Japanese storytelling tradition enlivens the familiar trappings of this well-worn story. Macbeth has been told numerous times in one form or another, but here, Kurosawa never forgets to maintain a refractional relationship with the original text, generating an experience that retains the dramatic weight of its predecessor, while soaring to new thematic heights.

Many scenes are given momentum by Noh elements, whether through sophisticated blocking or musical composition. This is especially evident in the climactic scene where Washizu murders the reigning lord. Each calculated movement by Toshiro Mifune is punctuated by the Noh symphony, as the chilling flute, rapping drums, and diaphragmatic singing underscore the finality of this evil act. Its starkly resonant structure ushers in the characters’ ultimate descent into depravity.

As much as the film’s dreary atmosphere is accentuated through Noh instrumentals and a gloomy orchestral score, Kurosawa’s use of silence achieves an equally convincing effect. The deafening silence ratchets up the tension in a manner that taps directly into the core of the lead characters’ moral conflicts and devious schemes. This is most noticeably realized in the scene where Washizu experiences his first hallucination. These moments of tense silence would not have the same effect if they were not accompanied by Kurosawa’s elegant camera movements and blocking, as it cascades in and out, traipsing over every one of Mifune’s emotive visages and mannerisms.

Mifune’s performance possesses a simultaneous theatricality and virtuosity that makes him the perfect flawed protagonist. His expressive eyes and gestures contain a world of inherent narcissism and volatility that is key to the character’s downfall. Washizu’s fate was no less preordained by the spirit than by his own unflinching ambition. Mifune captures this complexity with a style that is both utterly cinematic and equally made for the stage.

Isuzu Yamada’s portrayal of Lady Asaji (Lady Macbeth) possesses the grace of an established Japanese lady, while still relishing the conniving hand of the Bard’s iconic queen. Yamada fully exhibits the ruthless ambition of Lady Macbeth, while transplanting it onto the eastern palette, as the soft-spoken and formal Asaji is at once adhering to the principles of Japanese womanhood and breaking them in a masculine attempt to usurp power. Asaji’s costuming and makeup is perhaps the most direct insertion of the Noh style, as her face evokes the expressionless Fukai masks frequently used on stage. Yet, Kurosawa utilizes her cold and impassive visage to lay bare an examination of the hidden evils of humanity. While Washizu is inherently theatrical, Asaji is defined by a subtle intensity that boils over in the climax, where she loses her mind after realizing her child was stillborn.

Even though Kurosawa is mostly retelling Macbeth, he never fails to make the story entirely his own. His vision is one of shadows and fog. He engulfs his subjects in a barren, chilling, and hazy landscape, employing medium and long shots that simply refuse to cut—effectively submerging the viewer into the world of this epochal tragedy as well. This penchant for long tracking shots and sophisticated blocking also emboldens the lavish interior settings, as the same visual style now lends an absorbing immediacy to the dark plotting of Washizu and Asaji. The enduring legacy of Throne of Blood is not only tied to its vivid recontextualization of Macbeth but to its ability to reinvent it visually and philosophically.

Perhaps the film’s original Japanese title, “Spiderweb’s Castle”, was the better choice, as it’s not only more infinitely alluring, but more reflective of the intricate web of lies, deceit, and corruption that make up the men who hunger for greater power. Nevertheless, Throne of Blood remains the cinematic pinnacle of theatrical transposition, as its monument to Japan’s violent and turbulent history radiates with the vitality of an artist going beyond his influences.

The Princess is an Empowering Medieval Beatdown