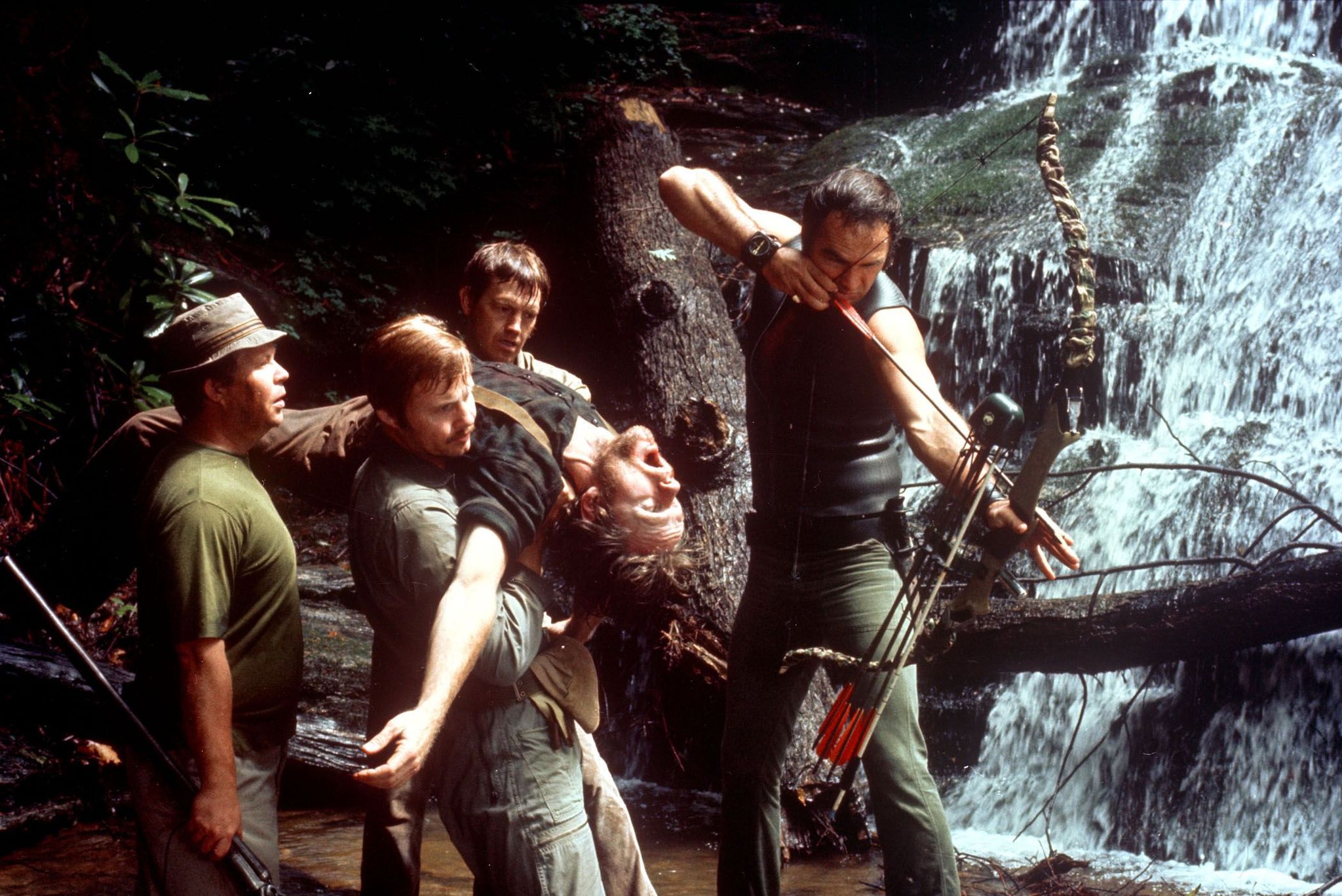 John Boorman’s engrossing, and utterly unnerving Deliverance is a masterful work of horror that is unabashedly one of the most controversial and provocative films of the 1970s, whose blade has not been dulled by time. It’s the rare experience that terrifies and sickens, even though it’s not a “horror” film in the truest sense. Audiences unaware of its savage and brutal journey will unwittingly fall in line with the four men at the center of it, falling prey to its picturesque landscape, oblivious to the life-altering and visceral encounters that await. Viewers will desperately want to look away, but in the vein of those men, will find themselves trapped in its sweeping current.

Deliverance centers on four so-called city boys on a weekend canoe trip on the fictional Cahulawassee River (a stand-in for Georgia’s Chattanooga River) in the Appalachian Mountains. Lewis (Burt Reynolds) is the group’s organic leader, believing the “system” of America will collapse, he jumps at any chance to hone his survival skills. With the river and its surrounding areas about to be flooded, Lewis takes the other three there for one final adventure. Ed (John Voight) admires Lewis’s bravado and inherent fearlessness, while Drew (Ronny Cox) and Bobby (Ned Beatty) are entertained by the trip, unaware of the dangers awaiting them downstream. What ensues is a brutal and harsh weekend that completely showcases the all-encompassing and unforgiving character of both the natural world and man’s most uncivilized instincts.

From the outset, the film taps into a clever “man vs nature” commentary. As it opens with a voiceover from the ignorant foursome, discussing the intrinsic glory of an untapped wilderness. They soon come across a shoddy house where they fill up on gas, hire somebody to drop off their cars, and engage in one hell of a banjo duet.

The “dueling banjos” scene is one of two legendary sequences, and beyond its virtuoso is also home to great thematic subtext. The complementing instruments provide a fleeting moment that bridges the divide between them and these impoverished hillbillies. Yet, before they’re able to take anything of meaning from this encounter, Bobby arrogantly tells Drew to “give him a couple of bucks”. And on they go towards a green hell.

The film owes its thematic potency and ultimate staying power to Boorman’s stellar direction, as it renders what could have been a superficial thriller, into a deeply human parable. Boorman was part of the original European wave of directors who had a great impact on the style and tone of the “New Hollywood Movement”.  Along with Roman Polanski, Milos Forman, and John Schlesinger, Boorman produced some of the greatest works of the era, bringing an outsider’s perspective and a bold approach to film technique. His American debut Point Blank utilized tonal ambiguity, cryptic editing, and expressionistic use of technicolor to vibrantly reinvent the film noir. But Deliverance is arguably his magnum opus.

Boorman’s “New Hollywood” output explored the ambiguities of American life, illuminating not only its rugged beauty and vibrancy but also the corruption and depravity that lies just beneath the surface. This is expertly and chillingly realized in the horrific “Squeal like a pig” scene. It’s one of the most disturbing scenes ever committed to celluloid, as Voight’s Ed is tied to a tree, and forced to watch his friend, Bobby, be sodomized by a demented, toothless, hillbilly. The scene owes its enduring quality to Boorman’s confident and assured direction, as his implementation of silence speaks volumes, forcing us to remain on every word, gasp, and startling yelp as each wide shot lingers just a few moments too long.

In addition to Boorman’s great direction, Vilmos Zsigmond’s pastoral and majestic cinematography echoes his masterful work in the previous year’s McCabe and Mrs. Miller. As his gliding lens fits firmly and boldly into the rugged depravity of this trip downriver. He’s shot some of the greatest films of this era, and Deliverance wouldn’t retain its hauntingly beautiful edge without his graceful composition, which elegantly tracks these canoes on their trek towards damnation.

Deliverance is, in every sense of the word, memorable. It wholly shocked audiences in 1972,  generating heaps of discussion (and money) regarding its provocative edge, and time has only sharpened its blade. It succeeds in being an experience that is utterly terrifying and palpable in its dread, while not actually being a prototypical “horror” film. In fact, when you mention the film in many circles, people will often latch onto its ability to terrify, but will never label it as a full-blown horror flick. But that ability to provoke and induce total fear is a testament to its timeless quality, as its visual and thematic splendor knows no bounds. Fifty years later, Deliverance still humbles, forcing us to realize it really isn’t a man’s world after all.

Death Becomes Her: Blurring the Remarkably Thin Line Between Horror and Comedy