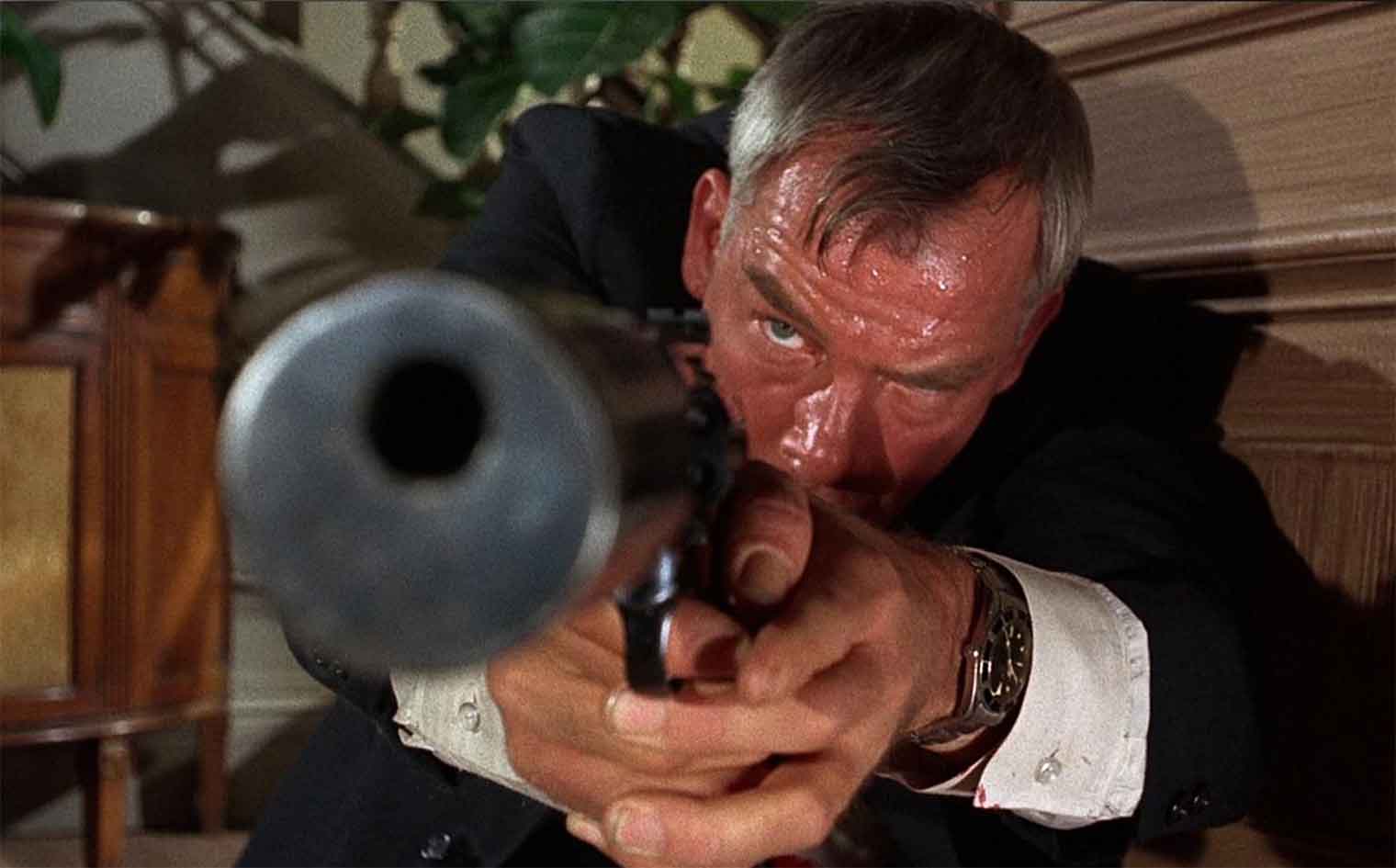 When I started to gather my thoughts to write about Point Blank for its anniversary, I did a bit of a double take when I saw how old the movie was. Fifty years — is that even possible? I went through the math: 1967, so that’s five decades ago. It seemed to make sense, but was still a shocking realization. Sure, you can tell from looking at a random clip; the colors, the grain of the footage, and the slightly tinny nature of the sound all gel with a movie from 1967. But Point Blank is so forward-looking, so fun, and so damn cool, that it’s easy to forget how long it has been around.

The genesis of Point Blank begins with The Hunter (1962), a crime novel written by Donald E. Westlake under his Richard Stark pseudonym. It was the first to feature the character Parker (changed to Walker in the film), an almost psychopathic thief with little concern for human life, who nevertheless lives by a simple golden rule: don’t screw him, and he won’t screw you.

In 1967, actor Lee Marvin was riding high — he had risen quickly from playing memorable hoods in The Big Heat (1953) and Bad Day at Black Rock (1955) to larger supporting roles like the eponymous outlaw of The Man Who Shot Liberty Valance (1962), eventually winning an Oscar in 1965 for Cat Ballou. Marvin met English director John Boorman while shooting The Dirty Dozen, which would become a runaway hit, and talked him into directing an adaptation of The Hunter. (It would be Boorman’s first Hollywood film.)

Point Blank displays its modernist pedigree from the opening minutes. The film is initially non-linear, opening with an assaultive and out-of-context scene of Walker being shot in a prison cell. We have no idea why he has been shot, but it’s done in an almost balletic manner. The bullets seem to pick Walker up and swing him through the air before he gracefully lands on the concrete floor.

The movie then backs up a bit to explain how we’ve gotten to Walker lying bullet-riddled on the ground. Shortly before the shooting, he runs into an old friend, Reese (scumbag extraordinaire John Vernon, in his first big role). Reese is in debt to a criminal organization, so he proposes that they intervene in a clandestine money drop at Alcatraz, then abandoned. A helicopter will drop off a bag of money, they’ll knock out the men who are supposed to pick it up, then split the spoils. But things don’t go as planned — Reese shoots and kills the money’s intended recipients, threatening to bring the organization down on their heads. He then shoots an unsuspecting Walker, leaving him for dead. These scenes are edited in a quick and disjointed way, the jumbled memories of Walker as he is on the verge of death.

Yet somehow he survives and swims away from Alcatraz. Walker is single-minded now; he’s not interested in revenge, not really. All he wants is his share of the money, $93,000. He finds his wife first, who sided with Reese to double-cross him. He then infiltrates the organization Reese belongs to, hunting down the top executives one by one. Each man who refuses to pay Walker ends up weighing a few extra ounces in lead, and he moves on to the next man. Along the way, he joins up with Chris (Angie Dickinson), his sister-in-law, and the key to finding Reese.

Marvin’s genius is fully on display as Walker, departing from the book’s characterization in ways that serve the film well. He’s not a psychopath like that character, but he shares a myopic focus on retrieving the money he is owed. It leads to some welcome comedy — Walker seems genuinely confused as to why his targets won’t simply pay him and save their lives. He’s ruthlessly logical, but also a bit thick, and his attempts to converse with other human beings often go awry. Usually, the leads in crime films are quick-witted, but Marvin seems to have partially modelled the character after Mike Hammer in Kiss Me Deadly (1955). Hammer was an atypical private eye, mean and pigheaded; Marvin is similarly pugnacious, though not as cold-hearted.

Still, he’s more compassionate than the character Stark originally wrote. After Walker finds his wife and she commits suicide, he falls into a nightmarish state in which he slowly loses his mind in her now-abandoned apartment. His memory flits among scenes of past happiness with her as he drifts into madness, only to be rescued by the intrusion of a thug who reminds him of his quest for his stolen money. Boorman and editor Henry Berman make Walker’s temporary dissociation painfully visceral. Watching it, you start to feel disconnected from reality yourself.

Beyond the intriguing editing and modernist tendencies, Point Blank exudes an effortless cool. Part of that is due to Marvin, who plays Walker as someone nearly indestructible. The character is an early model for the anti-hero that has so dominated film and television in the last two decades. He’s reprehensible and thuggish, but you can’t help but root for him. The film’s most famous scene features Marvin walking intently down a corridor in Los Angeles’s LAX airport. Even someone seeing the clip in isolation can get a pretty good idea of what kind of mission Walker is on. Intercut with it are scenes of Walker’s wife doing her makeup and going through beauty routines. The supposed murder of her husband has left her dead inside — the makeup is just to cover the emptiness with a rudimentary human face. Walker’s metronymic footsteps become part of Johnny Mandel’s moody score.

Despite the strength of Marvin’s performance and Boorman’s virtuoso direction, Point Blank was a failure at the box office. Nonetheless, critics noticed just how new the movie seemed, and future filmmakers would use it as a template for creating smart, breezy crime films. Quentin Tarantino is a fan, and the unconventional structure of a film like Pulp Fiction couldn’t exist without Point Blank. Steven Soderbergh’s populist crime capers owe a debt of gratitude to the dangerous cool of the film.

In some ways, Point Blank is noticeably dated. It’s a document of American films just after the collapse of film censorship and at the dawn of the rating system. You can feel it flexing its muscles, finding out just what is permissible — a bit of nudity here, some violence there, and a dash of moral ambiguity to taste. But even with all those elements screaming 1967, the movie still seems profoundly new and modern. At some point, modern filmmakers will give up on trying to copy Point Blank and will lead a new revolution in crime films. Until then, it reigns supreme.

‘The Mission’ Is The Great Unsung Hong Kong Action-Thriller

‘Dogged’ Taps Into Our Fear of What Lurks In The Woods, And In Each Other