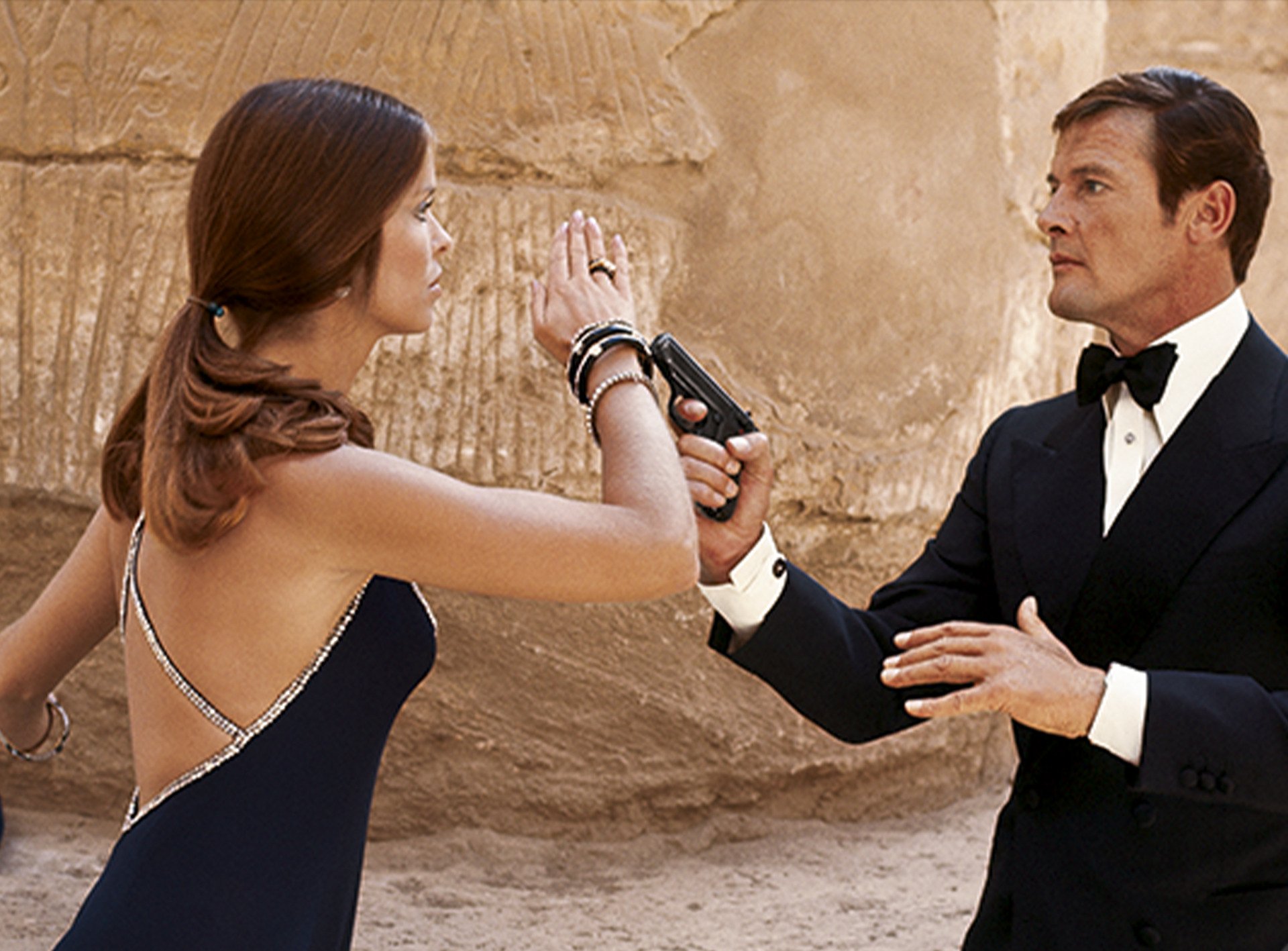 James Bond Spotlight: The Spy Who Loved Me

If you watch one Roger Moore movie in your lifetime, it should be The Spy Who Loved Me. The 10th James Bond film is Moore at his prime and the quintessential example of his 12-year run as 007. The story is bombastic with a top-tier villain bent on world domination and one of the greatest henchmen in the series’ history. It’s everything you’d want and expect from a classic Bond adventure. Not only does Bond save the world, the film effectively saved a franchise that was on the brink of disaster.

Moore took on the role of the MI6 agent in 1973 with the impossible task of filling the shoes of Sean Connery, the man who established the cinematic Bond as a worldwide sensation. Already a known commodity from playing The Saint on TV, Moore had two Bond films under his belt when The Spy Who Loved Me began production.

Bond films, based on an already popular book series by Ian Fleming, had the fervent fan base that we see in the franchise films of today. Replacing Sean Connery with Roger Moore was like replacing Chris Evans with Jake Johnson for the role of Captain America. Audiences greeted Moore’s arrival with crossed arms and raised eyebrows. After realizing the hopeless task of recreating the energy Connery brought to the role, Moore decided to make the character his own. Connery belonged to the Boomers and Moore became the Gen X James Bond.

Like any good Bond movie, the plot is convoluted and a thorough understanding of it is unnecessary to enjoy the film. In the cold open, Bond ski kills a Russian agent who happens to be the lover of the seductive and capable Russian spy Major Anya Amasova (Barbara Bach). Amasova and Bond must work together after a large and mysterious ship captures Russian and British submarines and their crew. Their pursuit leads them to the sea-based headquarters of Karl Stromberg (Curd Jürgens), where the eccentric mastermind plans to launch missiles from each submarine to instigate nuclear war. The two clash throughout their mission as they continuously attempt to out-spy the other but cooperate when they battle the giant metal-mouthed henchman Jaws (Richard Keil).

It’s here in 1977 that the best elements of Moore’s tenure coalesce. Moore knew he would struggle to embody the brutish menace of Connery’s Bond. In For Your Eyes Only, Moore was reluctant for his 007 to send a car over a cliff with a villain inside. Moore said it “was Bond-like, but not Roger Moore Bond-like.” That ruthlessness is toned down in The Spy Who Loved Me and his lightheartedness is cranked. The best example of this is when Bond’s car/submarine Lotus Esprit drives onto a beach full of sunbathers and he rolls down his window and performatively drops a fish. Where Connery would shoot a look of menace, Moore opts for a calm but intense eyebrow raise.

To complement his swagger, this Bond is so enjoyably representative of the 70s. His tuxedo crescendos into a billowy bellbottom and his digital Seiko watch prints out his secret messages on ticker tape. He sports a ketchup and mustard-colored ski suit as he dashes away from gunfire over Marvin Hamlisch’s disco-infused Bond score. He covertly infiltrates Stromberg’s lair on an unbelievable gadget from Q –a  jet ski.

In the film’s pre-title sequence Bond makes a death-defying ski leap and deploys an enormous Union Jack parachute as Carly Simon’s Nobody Does it Better tinkles into the beginning of the opening credits. It’s an unusual Bond theme. It’s not big and brassy like Goldfinger, On Her Majesty’s Secret Service, or even Paul McCartney’s Live and Let Die. Simon’s tune is a piano ballad more in the vein of Nancy Sinatra’s You Only Live Twice (my personal favorite Bond theme). The choice for the song to convey romance and style over power and tradition perfectly reflects Moore’s turn as 007. The end credits begin with an unexpected choir of men singing the ballad in a show-tune style. It’s a gloriously camp cherry on top of a perfect Moore-as-Bond sundae.

The success of The Spy Who Loved Me was vital to the Bond franchise. Ten films into the series, Bond fatigue was beginning to set into audiences. The previous film, The Man with The Golden Gun, did poorly at the box office and was panned by critics. Compounding that issue was trouble within EON Productions, the company that produces the Bond films. The franchise’s founding producers, Harry Saltzman and Cubby Broccoli, were feuding over money and the direction of the series. Saltzman was going through financial troubles and initially blocked production on the film before being forced to sell his shares to United Artists. United Artists’ Publicity Director Charles Juroe said if The Spy Who Loved Me had the same reception as The Man with the Golden Gun “there could have been a big, big problem.” The film was a smash hit and brought the series back into the spotlight. At the time, it was United Artists’ highest-grossing film and ranked fourth in the worldwide box office revenue for its year.

This article is part of our James Bond Spotlight.