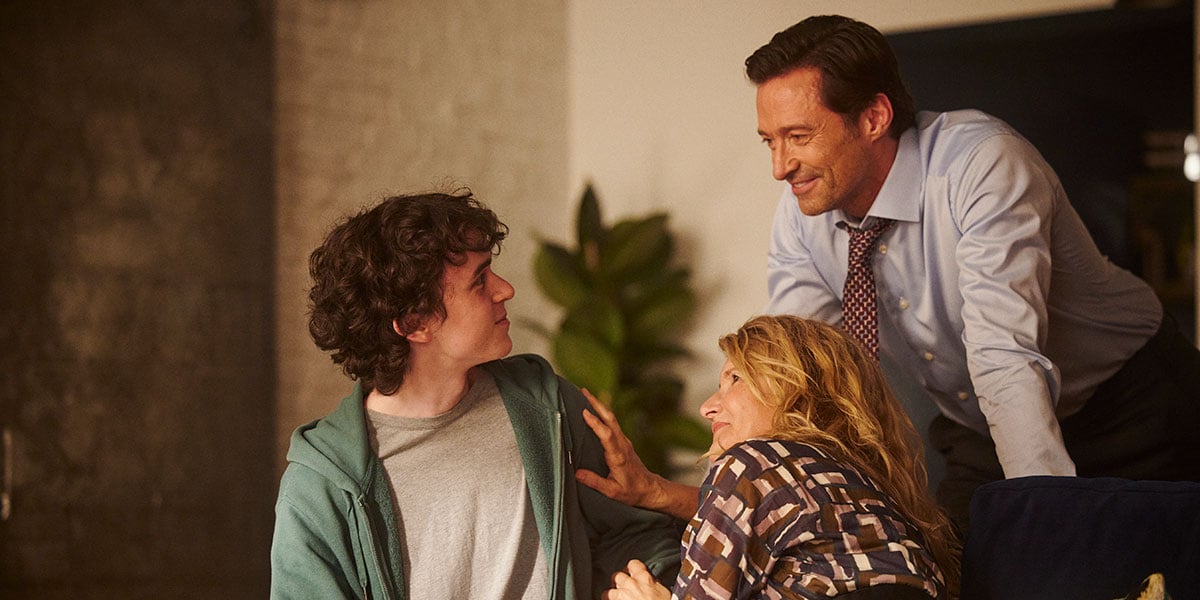 After the incredibly haunting feature-length debut from Florian Zeller, The Father, where he adapted his own play to staggering effect and gave Anthony Hopkins one of his best roles to date, his next film was primed to be a big deal. Another adaptation of one of his own plays – the second in a trilogy that began with The Father – Zeller’s The Son is a baffling project. A very stagey production that telegraphs its entire plot early on, The Son never goes beyond feeling like an after school special led by a solid Hugh Jackman performance that’s surrounded by misfires at every turn.

Jackman plays Peter, a husband to Beth (Vanessa Kirby) and father to Nicholas (Zen McGrath) whose mother is Peter’s ex-wife, Kate (Laura Dern). Having remained distant from Nicholas for most of his life, he becomes a last-ditch effort to help his son who seems to be succumbing to depression and no longer attends school during the days; instead, choosing to roam New York City while his parents think he’s in school. The signs of depression are clear but to Peter, it makes no sense. A kid who says he’s doing well in school and is about to go to a party with a girl, Nicholas doesn’t appear to be crying for help.

Of course, that’s what Zeller’s screenplay is trying to convey: how easily we miss the signs out of reluctance to believe something is wrong with someone we love – and even worse, those we were responsible to raise. It’s a script mired in conventional melodrama and stilted dialogue that is delivered in exactly the same performative manner as a play – loud, clear, and with a verbosity that doesn’t mesh with reality. Every word is dripping with saccharine nonsense by parents that couldn’t be more aloof to their son’s pain.

If The Son was the feature-length debut of a playwright, it would make more sense why it is delivered the way it is. Disregarding film as a medium, the few flourishes that Zeller employs are so blunt in their execution that you’d be forgiven if you thought this was a different director than The Father. It’s not though, and every cut and shot that added immersion to a father’s degrading mental state is replaced with long takes of people arguing in barely lit apartments or shots of people staring off into the distance.

These decisions regarding the cinematography and general aesthetic of The Son would not be so noticeable if the performance from McGrath wasn’t so painful to endure. Part of it is due to the screenplay being so obvious and blunt in its intent, but there’s no denying that McGrath’s performance feels far more stilted than anything else within Zeller’s misfire. Vacant stares that require licensed sad songs to be effective and emotional beats that feel out-of-place regardless of their mood mires the film with a terrible central performance.

What’s worse though is that Zeller’s film never really feels like it’s about the son more than it is about Jackman’s father character. While Jackman gives a solid performance that does get better as the film pours on the melodrama, The Son’s good intentions end up undercut by a desire to focus on how a father copes with a depressed and potentially suicidal teenage son. We don’t spend time with Nicholas as he wanders New York City wasting his days, but we do watch an aloof father try to juggle a potentially lucrative job opportunity against the notion that he may be falling into all the same patterns as his father (played by Anthony Hopkins who shows up briefly and with a much more impactful presence).

Then there’s the afterschool special of it all. The Son is clearly coming from a genuine place and its exploration of the feeling of helplessness and miscommunication from parents with their children is undeniably important. A crucial conversation that needs to be had about the ways in which signs often go missed, or the ease with which we want to accept that things are better when they’re not, The Son has good intentions. It’s just the execution of that which leaves the film’s message feeling like its been made right away and then hammered into the audience’s head in as blunt a way as possible.

The less we talk about the ending of The Son, the better, but it is difficult not to watch the entire final act of the film and see the writing on the walls. A screenplay that sets up elements and then reminds the audience of them at every turn, Zeller’s finale is as obvious as they come and every second wasted on building tension within it is a fool’s errand because of how much Zeller has already treated the audience like imbeciles. It’s the downside of adapting a play into a movie without employing any cinematic language unless it specifically relates to the ending of the film. Every moment that seems like it might have been written specifically for a film version of the play is just another element delivering the same end result.

For a sophomore feature, it’s understandable for there to be a case of diminishing returns. Zeller’s The Father was a truly remarkable debut that felt like someone realizing what film can do to elevate their already emotional source material. Where The Son slips up most is that it never presents itself as necessary beyond the conversations it wants to have about suicide and depression. There is no part of Zeller’s screenplay that is written for the screen and every part that overlaps with the play such as dialogue and character work is flimsily put together with some egregiously stilted interactions. What should have at least provided its actors with a canvas to deliver stellar performances is turned into an upward climb as everyone struggles to be more than just an archetype for Zeller’s social commentary.

A Man of Reason Retreads Every Revenge Film Cliché