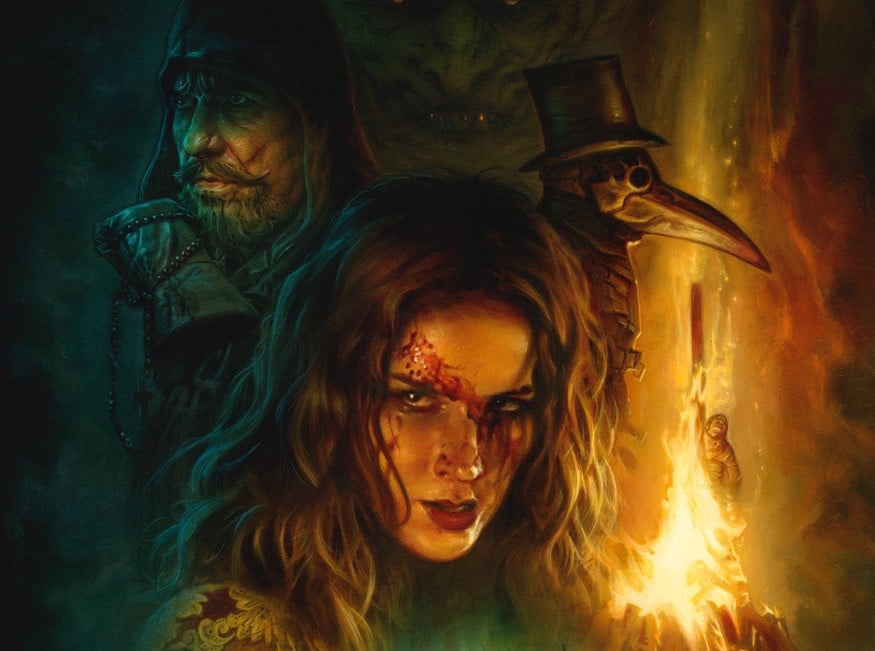 It might be easy to look at Neil Marshall’s The Reckoning and imagine a somber, slow-burn period horror flick in the vein of The Witch or maybe Hagazussa: A Heathen’s Curse. After all, the film is set against the backdrop of the Great Plague and witch hunts of the 17th century and focuses on a woman accused of witchcraft after the death of her husband. But where those films dealt in somber atmosphere and creeping dread, Marshall goes a different route. The Reckoning is a big, loud, fiery beast of a film, one with a foot planted very firmly in pulp and exploitation – for good and ill.

As the title suggests, The Reckoning has more than a touch of the revenge film to it, specifically the female revenge movie. Like I Spit on Your Grave, Kill Bill and many others, this is a film about a woman wronged and then striking out in search of bloody resolution. In this case, this comes with a historical slant. Grace (Charlotte Kirk) lives an idyllic life with her husband and infant daughter until hubby contracts the plague and takes his own life. After a violent confrontation with her landlord, Grace is accused of witchcraft and imprisoned. To make matters worse, Grace is to be interrogated by Moorcroft (Sean Pertwee), the same witch hunter who put Grace’s own mother to the torch years earlier. The history of Europe’s bloody witch trials is a central concern of the film, as we’re reminded by opening and closing texts, and Grace is but one of numerous women falsely accused and heinously persecuted.

While the film identifies at least partially as a historical text, there’s a degree of exaggeration that also very much gives it a pulp vibe. Everything seems heightened and faintly exaggerated, from the extra-creepy plague doctor masks worn by Grace’s accusers to Moorcroft’s assistant Ursula. Burned seemingly from head to toe and quick with a knife, Ursula seems poised at any second to spring into a highly choreographed action scene, a sinister mini-boss to Moorcroft’s big bad. Nothing is subtle or downplayed here, and even the soundtrack never seems to stop swelling, as if to drive the audience to emotional heights it never wants them to come down from. And bear in mind that none of this is strictly bad. Pulp and exploitation can be, and often are, incredibly fun. But the film’s indulgent nature does lead to some problems.

When The Reckoning finally makes good on its title, it’s fun!

There’s a dirty little secret to a lot of exploitation films, and especially revenge films. In many cases, and The Reckoning is no exception, the film is as much about the spectacle of suffering as it is the ensuing revenge. After all, we have to demonstrate how bad the villains are, and how deeply wronged the protagonist is, right? So invariably you get extended sequences of torture, violence and in the worst cases scenes of sexual assault. Some films keep these brief and to the point, but others less so. Often in those latter cases, it’s hard to escape the idea that as much as the brutality is there to justify the revenge, the revenge is also there to give a kind of license to the brutality. “It’s ok to linger on this woman’s agony, right? To show how wrong it is and to make her inevitable revenge that much more satisfying?”

But….is it? Are all this suffering and graphic depiction of the crimes perpetrated against women really necessary to make us hate the baddies? Is this all here just to enable an act of fiery, righteous revenge later on? This proposition is especially hard to swallow in the case of The Reckoning, which withholds the vengeance the title implies for the last half hour of a two-hour film, and much more screen time is devoted in the end to Grace’s torment. The film isn’t nearly as graphic as it could be and is in fact rather tame by the standards of most horror films. But good lord, it just keeps going on. Whippings, beatings, torture both physical and mental. Is the film really about the reckoning, or the loathsome deeds that incite it? It’s genuinely hard to say, to escape the nagging suspicion for much of the middle part of the film, the spectacle of this woman’s suffering is the film’s bread and butter. Are we here to watch Grace cast off the shackles of oppression or to watch the oppression in lurid detail? Can we really not get to the cathartic empowerment of the climax without squirming through an hour or so of lurid disempowerment?

When The Reckoning finally makes good on its title, it’s fun. There’s blood and fire, a ludicrous explosion, and all the mayhem you’d expect from a Neil Marshall flick. But getting there can be tough, and it feels overall like the film places way more of its focus on the torment of its hero than the righteous payback the title promises. This is why the film feels like an exploitation movie and not one that quite rises above that genre’s baggage.

The Mortuary Collection is a Disappointing Foray Into Horror Portmanteau