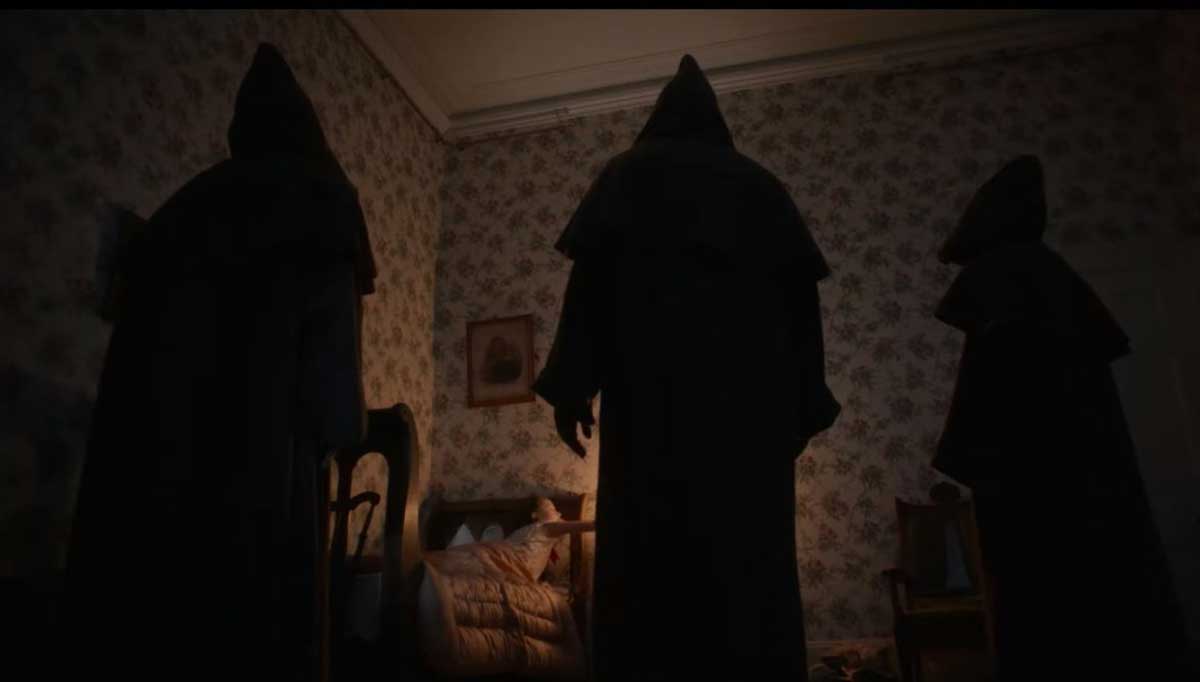 More focused on tortured characters who haunt themselves better than any spooky ghost stacking chairs or possessing dolls, The Banishing is a curious and diverting entry in the haunted house genre. This story of a vicar and his new bride relocating to a creepy manor pre-WWII is a slow burn that never quite captivates but still manages to generate a little intrigue thanks to handsome photography and a little bit of good, old-fashioned incoherence. What exactly is happening might not be clear up to (and even past) the end, but a healthy dose of hidden pasts and oodles of sexual repression is layered in to prevent audiences from beating a hasty retreat.

The confusion starts almost immediately with a grisly husband-and-wife murder-suicide in a countryside English manor, which sets an ominous stage for the next tenants. What drove the former occupants to their madness? And could that insanity happen to the next couple? Perhaps if Reverend Linus (who uses piety as his security blanket) and Marianne (more in tune with earthy affairs) were a bit more well adjusted. Alas, there are enough demons to go around in the heads of these two to cause an external ghost to back away awkwardly, not wanting to get involved. As he recoils in excessive guilt from her oh-so-restrained marital advances, she struggles with a salacious past that produced a daughter out of wedlock. For shame! This initial setup works quite well, and it’s here that The Banishing establishes its undercurrent of tension. Forget the mystery of the catacomb-like basement, labyrinthine hallways, and poorly behaved mirrors — are Linus and Marianne ever going to do it?

It wouldn’t take much for the resident entity of a haunted house to exploit the self-inflicted headspaces of these two, and The Banishing‘s wastes little time, mesmerizing the aforementioned daughter, Adelaide, into making creepy pronouncements and blank stares to the usual effect. Soon enough Linus and Marianne are plagued by gruesome visions have them questioning their own reality, as well as the fidelity of each other. Enter a rebellious pagan named Frank,  disillusioned by the previous world war and the church, who knows what secrets lie in the catacomb-like basement of this house. If he can stop boozing for a moment, maybe Frank can reveal just enough twisted lore to pull this patchwork family — and viewers — back from the ghostly abyss of exposition that is attempting to consume them.

Connoisseurs of the haunted house movies won’t find many story surprises buried beneath the creaking floorboards or hidden in the moaning walls, and fans of jump scare schlock will likely be disappointed at the lack of ghastly faces shrieking mouths full of maggots behind unsuspecting hallway wanderers. Nevertheless, there’s a strangeness to the atmosphere of The Banishing that engages, even if it never quite gets under the skin. Odd flashbacks rarely illuminate anything, hallucinations of violence are difficult to discern from tedious reality, and the motivations of the oily bishop and drunken pagan enemy are vague at best. There’s a world happening around Linus and Marianne that operates apart from them, and this adds to the uneasy atmosphere. The backdrop of the impending war also creates a pervasive dread that covers the drab, grey landscape; sure, there’s an apparition on the loose, but something else wicked this way comes. Unfortunately, it also allows for a tiny bit of clumsy subtext about facing evil instead of standing passively by, but thankfully those moments are as brief as they are shallow.

Director Christopher Smith plays some tricks of his own, cleverly messing with reflections that have a mind of their own, and sending his camera floating down labyrinthine hallways, emphasizing The Banishing‘s psychological maze. All the while he frames intoxicating imagery both outdoors and in, blending the surface heat of candlelit bedrooms with ceaselessly grey skies that suggest things are no clearer outside. So why not close your eyes, investigate that suspicious banging noise (then inexplicably blame it on rats), and settle in for some ghostly frights? Those haven’t been mentioned much as of yet as they are few and far between. Rather than proclaiming themselves loudly, the spectral elements here come off more as an afterthought, a reason to materialize and resolve other conflicts. Even the characters tormented by this demon don’t seem phased much, waiting until the last minute to seek outside help, mostly content to put up with the annoyance. Instead, it’s the smoldering relationship between an emotionally caged Marianne and the stubbornly limp Linus that is truly scary.

Whether that’s enough for horror audiences is the big question. Like its good vicar, The Banishing stiffly refuses to offer passionate buildups or releases, and that attitude carries through to a subdued ending more concerned with setting characters’ minds at ease than giving having an exciting payoff. That might send some less-patient viewers running from this haunted house (a move no one ever seems to make in these films), but those who enjoy a little restraint in their ghost stories can settle in and make themselves at home.

*The Banishing releases on Shudder April 15

The Banishing Analyses Cycles of Violence Through Real-Life Horror