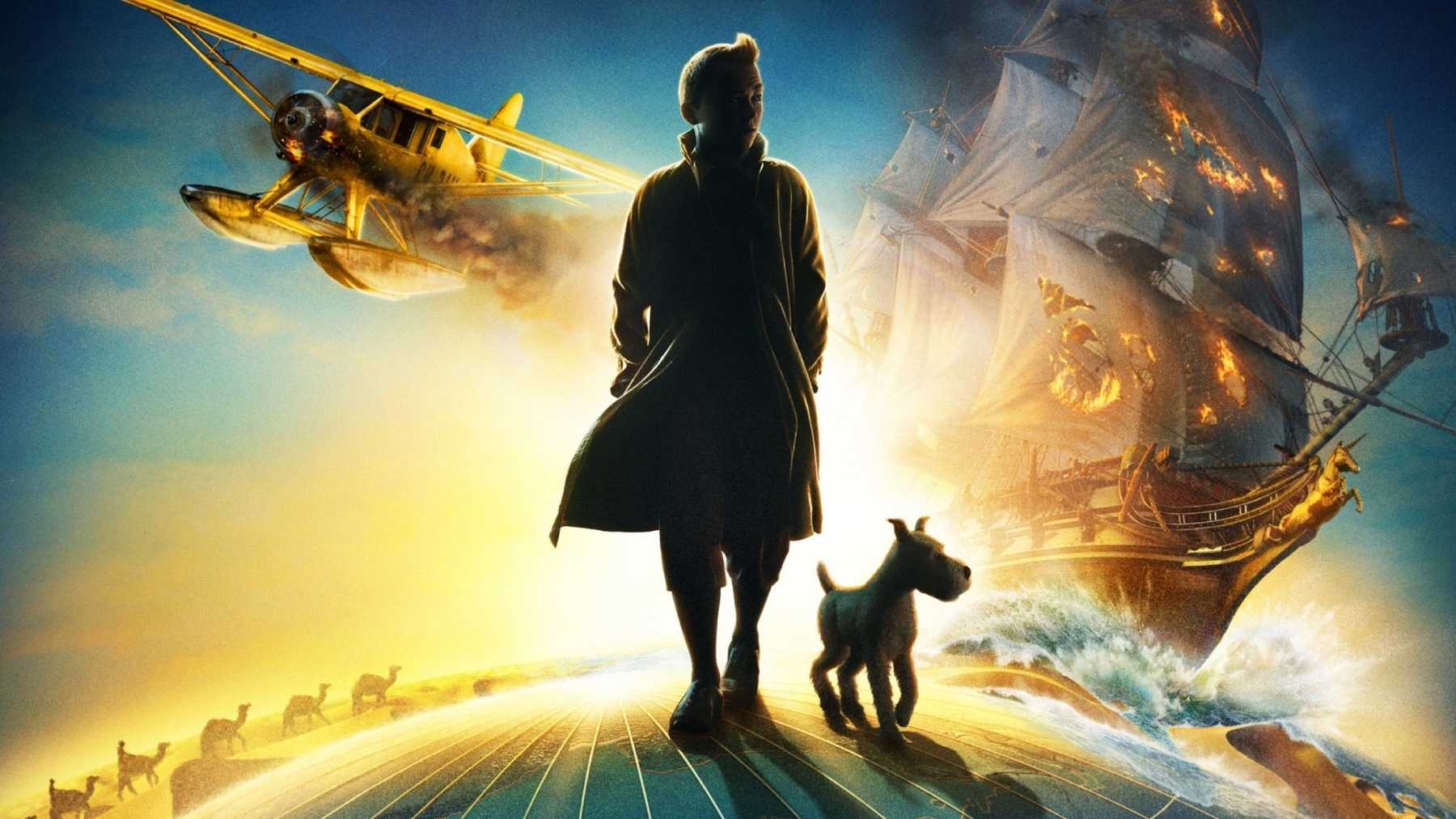 Spielberg displays his signature blend of action/adventure and comedy…

But make no mistake about it, adapting Tintin to the big screen was not easy, in fact, it was so difficult that Spielberg has been grappling with the task for more than thirty years – he first acquired the rights to adapt Tintin in 1983. The challenge is pleasing Tintin’s fans all over the world with a faithful adaptation (Hergé’s 24 Tintin adventures have sold more than 200 million copies worldwide) while simultaneously interesting American audiences who are relatively ignorant of the series.

Spielberg immediately follows this with a sequence introducing Tintin having his portrait sketched in an outdoor market by a man who turns out to be Hergé, which allows us to go from the traditional 2D Tintin drawing straight to the motion-capture 3D animated Tintin, introducing the character properly and simultaneously reassuring long-time Tintin fans that Hergé’s work will be respected throughout the movie.

While the film uses motion-capture animation similar to the type introduced by Robert Zemeckis in The Polar Express, it manages to avoid the uncanny valley effect of that film and Zemeckis’s Beowulf and A Christmas Carol by giving the characters faces that are based on Hergé’s drawings rather than on the actor’s faces. Spielberg also walks a delicate and successful tightrope between allowing the motion capture performances to give the animation dramatic weight and more traditional slapstick cartoon physics.

It should hardly be surprising that the standout performance is Andy Serkis as Captain Haddock. Since Serkis essentially helped invent motion-capture animation, it is hardly surprising that his Captain Haddock is the most interesting character any time that he is on the screen. It helps that Haddock is Hergé’s most interesting character, the one with the most developed past and the character who is allowed to evolve the most, the one who is allowed to have a really satisfying arc. The Adventures of Tintin gives us Haddock’s evolution in miniature, from paralyzed alcoholism to paralyzed sobriety to effective mild alcoholism. He is introduced in the film as a man in despair of ever approaching the legacy of his 17th-century ancestor and ends the film quite literally as the rightful heir to the Haddock legacy.

Daniel Craig is also excellent as the main villain Ivan Ivanovitch Sakharine. In Hergé’s The Secret of the Unicorn, Sakharine is a red herring and the Bird brothers are the main villains, but Sakharine makes for a great villain, if for no other reason than that he is a spitting image for a young Steven Spielberg. It’s almost as if Spielberg decided that if the film worked, everyone would credit Hergé, while if the film failed, everyone would blame Spielberg, so he might as well insert himself into the film as a villain.

The rest of the cast are quite good, with Jamie Bell as Tintin and the great comedic duo of Simon Pegg and Nick Frost playing the bumbling detectives Dupont and Dupond Thompson and Thomson. In a smaller role, opera singer Kim Stengel brings life to the extremely politically incorrect Milanese Nightingale, Bianca Castafiore.

The not-so-secret hero of the Tintin books is Milou (or as you Anglos call him, Snowy) and this is honoured in the film. A running joke in the books is Milou/Snowy figuring out who the bad guy is ages before Tintin does. In a sense, Tintin is the Watson of the series and Milou/Snowy is an extremely sarcastic Holmes, including Tintin being a dead shot like Watson and Milou/Snowy being an addict like Holmes. While Spielberg does not have Hergé’s ability to include thought ballons of Milou/Snowy, he manages to duplicate the dog’s intelligence and his frequent hair-raising, daredevil rescues of Tintin.

Spielberg put together a murderer’s row of writers for the film. Steven Moffat wrote the first draft of the script before leaving to be Doctor Who‘s show-runner and his script was tweaked by Edgar Wright and Joe Cornish. Some might argue that all the three men did was stitch together the best bits from three Hergé books, The Crab with the Golden Claws which first introduced Captain Haddock, The Secret of the Unicorn which revealed the hidden past of the Haddock family, and Red Rackham’s Treasure, the sequel to The Secret of the Unicorn.

What Moffat, Wright, Cornish (and Spielberg) have done seems deceptively simple to someone who knows the books so well that they can call out pages and panels for various beloved bits like the sidewalk collision that leaves an old women’s head being circled by real canaries escaped from a dropped cage. Comic books are a very interactive medium. The reader decides how quickly or slowly to read a panel or a page. The best comic book writer-artists like Hergé and Carl Barks, the writer-artist of the Uncle Scrooge adventures, could guide a reader through a page and switch back and forth from comedic slapstick to rollicking adventure, to high emotion and back again. Barks and Hergé might tell a great visual joke, but it is the reader who gives the joke its comedic timing.

The genius of The Adventures of Tintin is that it translates the very individual experience of reading Hergé’s books into the more universal experience of seeing them on screen. In the process, they manage to capture the slapstick comedy of Dupont and Dupond Thompson and Thomson and the rollicking adventure of Tintin, Haddock and Milou/Snowy including a pirate sequence that makes this the best pirate film since The Princess Bride.

Especially good are the scene transitions like the Unicorn rising from the sand dunes or an outstretched hand turning into a desert being crossed by two camels or bouncing back between the flashback 17th century Captain Haddock fighting pirates and the present-day Captain Haddock deliriously fighting the French Foreign Legion.

The only misstep of the film is the 3D. While never offensively in the way, it is not necessary to enjoy the movie. Save your money and see the standard 2D print. That version is highly recommended as one of the best films of the 2010s, whether you know who Tintin is or not.