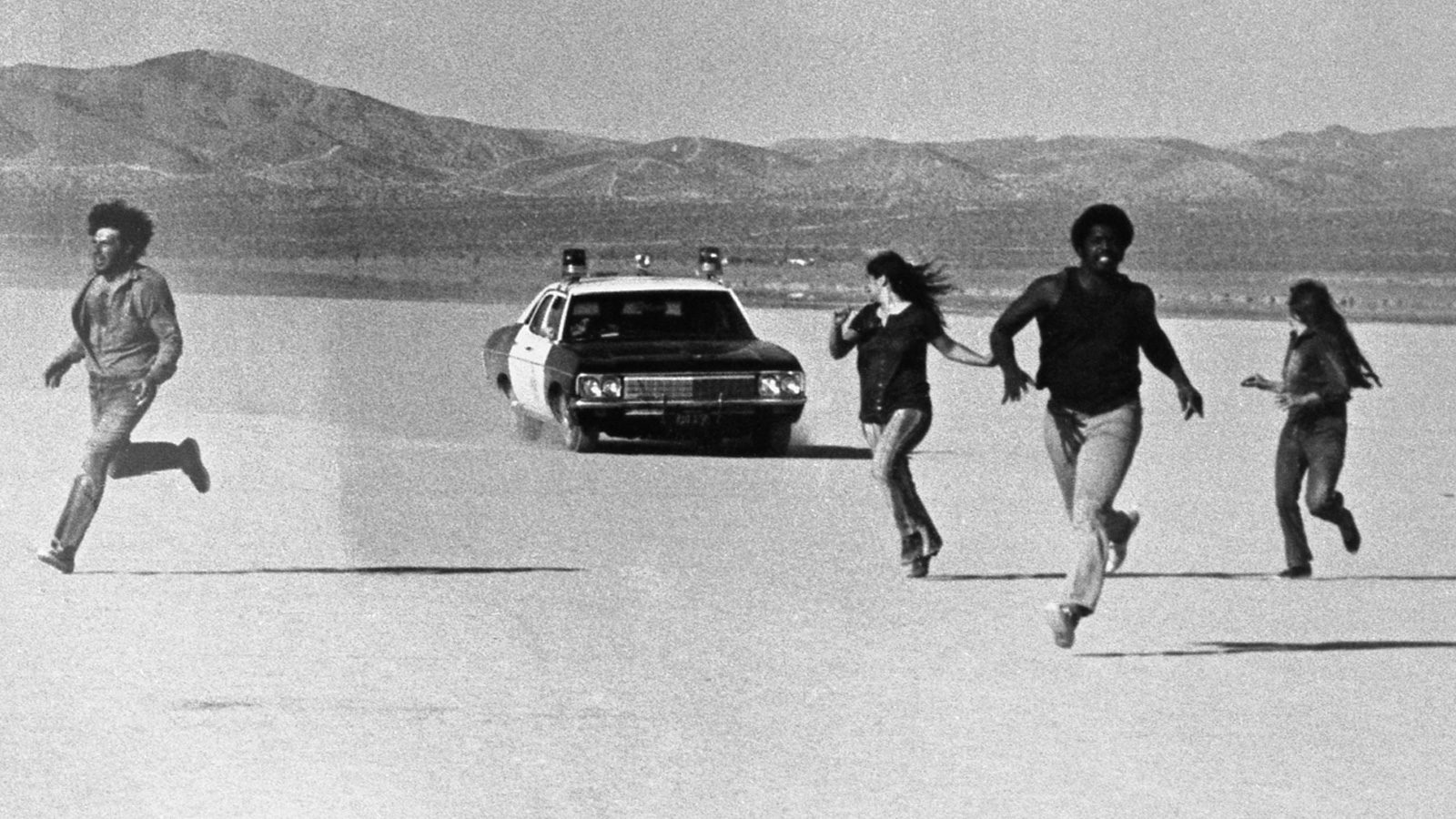 Images of the heavy-handed police response to protests and the fatal shooting of unarmed people of color have re-ignited discussion about the increasing militarization of U.S. police forces.

They are also reminiscent of this indelible image from Punishment Park, a powerful faux documentary that brought police militarization to its extreme but inevitable conclusion over 50 years ago.

Punishment Park’s $95,000 budget (per the original press kit, which is included with a 2005 DVD release) perhaps held back director Peter Watkins from equipping the cast with more to work with, but the film’s impact is hardly blunted. The press kit insists “Punishment Park takes place tomorrow, yesterday or five years from now. It is also happening today.” And this can still be said of it.

Punishment Park is not only a prescient work in that it predicted this blurring of the line between combat and law enforcement roles, but also a stark reminder of how little has changed in world affairs since it emerged in 1971.

The film takes place in what is recognizably the United States (the southern California desert in particular) in the early 1970s. Richard Nixon is president and there is domestic turmoil between supporters and opponents of the war in Vietnam. There is a speculative element, however: Overseas, the fighting is coming dangerously close to the borders of China and creating potentially apocalyptic tensions. Radio news broadcasts are a near-constant part of the background here and also reveal that American jails are becoming overpopulated with political dissenters. “We’re filling up our prisons faster than we can build new facilities,” says one cop.

The federal government has invoked the McCarran Act, a genuine vestige of McCarthyism that has empowered it to arrest political dissenters en masse with little or no cause. Watkins shows us, one such group, as it appears before a tribunal of conservative politicians and citizens at large. Their guilt is a foregone conclusion but they are afforded opportunities to speak and both sides of the process express their views. The sense of verisimilitude is strong in these moments; Watkins cast amateurs who were in many cases expressing their genuine feelings on the then-current state of affairs and real anger emerges from both camps.

The tribunal unfolds in parallel with the sentence of a previous group. The detainees are given two options: Time in federal prison, or Punishment Park. Choosing the latter means playing a three-day game of capture the flag against police and National Guardsmen across a 50-mile swath of desert. It’s ostensibly a training exercise for the men in uniform and a chance at freedom for any detainees who succeed.

The players are soon divided between those who believe they can win and those who, believing there is no winning, decide to stand and fight with hopes of escape. That the game is entirely rigged becomes clear when the water promised at the halfway mark proves to be a deception and the symptoms of extreme dehydration set in for those playing along.

Punishment Park is political cinema at its best.

This revelation is clearly foreshadowed, however. As the players set off with a two-hour head start, we see the pursuers being instructed in maximizing the killing power of various firearms. Sherriff Edwards (Jim Bohan) is chillingly glib as he tells his colleagues that the handgun he’s demonstrating will stop a rhino in its tracks. This is no game. It’s a mass execution.

In his introduction to the DVD edition, Watkins explains that he’d been preparing to leave the U.S. after the collapse of a Civil War-related project he’d been developing, but the shootings at Kent State University in May of 1970 were a “turning point” and he quickly assembled a budget and crew for what would become Punishment Park.

Watkins’ work was rarely seen in its day. The War Game, for one, was not shown for some 20 years after being deemed “to horrifying for the medium of broadcasting” by the BBC, which also commissioned it. Punishment Park itself played just four days in one New York City Cinema and has only rarely been screened in the U.S. since. “Participants at a seminar for TV producers from 24 Public Broadcasting System (PBS) stations across the U.S. all swore that they could never, and would never show a film like this on American TV,” Watkins has said. “And so they haven’t.”

As much as the film is steeped in its time and shaped by Kent State, the 1968 Democratic National Convention and the Chicago Seven trial (where defendant Bobby Seale was bound and gagged by order of Judge Julius Hoffman, a moment recreated in the tribunal scenes), Punishment Park is only more uncomfortable viewing today: Legal dead zones for indefinite detention without due process, war waged under false pretenses (see also, the Gulf of Tonkin) and, of course, authoritarian law enforcement.

This overview of Watkins’ work rightly suggests that he, “like Orwell before him, shows how we are lied to, and how we lie to ourselves.”

The Adventures of Tintin: Motion Capture Animation at its Best