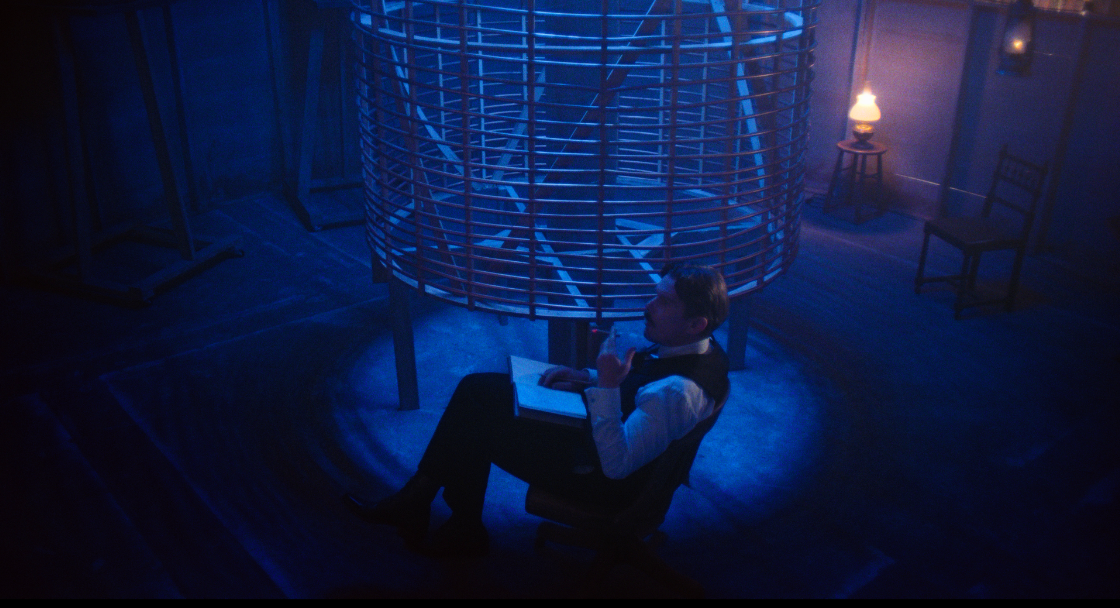 The 1980s California rock band Tesla took their name from the 19th- and 20th-century inventor Nikola Tesla, and they didn’t stop there: The group frequently referenced Tesla and his legacy in their lyrics. In 1991, they released a song called “Edison’s Medicine (Man Out of Time),” in which they accused Thomas Edison of cheating Nikola out of credit and money. The song took its name from Tesla: Man Out of Time, a biography of Tesla, by  Margaret Cheney, which was published in 1981.

It’s fair to say that, nearly 30 years after the Tesla song, Nikola Tesla is no longer a man out of time; no one can say anymore that he’s unheralded. He has the world’s most popular electric car company named after him, more books have since been written, and there have also been movies that have told the inventor’s story.

In Christopher Nolan’s The Prestige, David Bowie played Tesla. Last year, there was The Current War, which focused mostly on the battle between Thomas Edison (Benedict Cumberbatch) and George Westinghouse (Michael Shannon), with Tesla (Nicolas Hoult) relegated to the third lead. The film, which was finally released after it had sat on the shelf for more than two years following the implosion of The Weinstein Company, didn’t make much of an impact, but I found it exciting, and somewhat underrated.

But the latest Tesla film, called simply Tesla and coming out this Friday in a few theaters as well as standard VOD channels, is even better. While the film, a Sundance debut from earlier this year, covers much of the same events as The Current War, including Edison and Westinghouse’s battles, and the unfortunate screwing-over of Tesla.

But Tesla is a wildly unconventional biopic. Not only does it not go in straightforward chronological order, but it uses a voiceover-from-the-future by Anne Morgan (Eve Hewson), who sits in a room with a MacBook and repeatedly suggests that viewers Google the characters, and even fact-checks the movie in real time, stating at the end of various scenes that “that scene never happened.” If only she’d known the film would be watched by most people at home…

Ethan Hawke plays Tesla is something of a subdued performance, which soft-pedals the Serbian accent and consists largely of reacting. But the best turn in the movie is that of Kyle MacLachlan, who plays Edison as much more of a villain than Cumberbatch did in the earlier movie.

MacLachlan didn’t nearly get the career bump that he should have after Twin Peaks: The Return, but he has been popping up more and more in supporting roles of late (including the recent Capone), and it’s apropos that he’s playing Edison, since throughout his Peaks run, there always seemed to be weird electrical currents near him. (He also, at one point, says “got a light?”)

Hewson, the daughter of Bono, also delivers a potentially star-making turn as the narrator who also appears as a character. Jim Gaffigan, in a supporting performance that may be my favorite thing he’s ever done on screen, plays Westinghouse, while sporting a mustache that seems to be a tribute to Wilfred Brimley. Also in supporting roles are recognizable faces like Ebon Moss-Bachrach, Hannah Gross, James Urbaniak, and Lois Smith.

Michael Almeryeda, the director of Tesla, directed Hawke and MacLachlan 20 years ago in his present-day adaptation of Hamlet, though he also directed 2017’s fantastic Marjorie Prime. He wrote Tesla, it’s said, early in his career, and revisited the project in order to make it now.

The film is a joy, has a great deal of fun with anachronisms, such as Tesla singing a Tears for Fears song in one scene. But if you’re going to have Nikola appreciate music that wouldn’t be created until a century later, why not Tesla?

Fantasia 2020: Sleep is a Stealth Thriller Posing as Horror