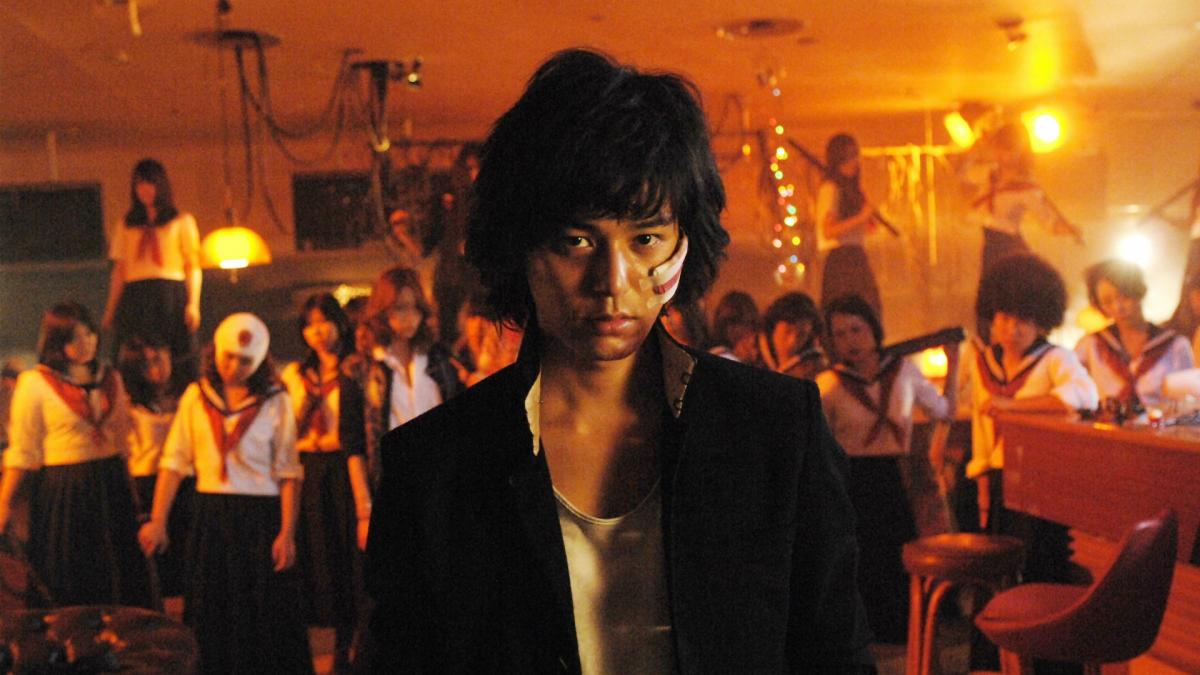 This year, Fantasia pulled out all the stops to kick off the Festival with a bang – several bangs. They unveiled a new interactive screen that displays pictures from films playing in the festival with capsule reviews in English and French, logos of sponsors, and recent random tweets that mention FantasiaFest. It can become a bit of an infinite “Meow” loop, but it is still very cool.

To mark the fact that a Japanese film was chosen as the official opening film for the festival, the local Japanese consulate sent a representative and (better still) sponsored a Japanese dance and an awe-inspiring Japanese drum performance. When I say that it was a percussive assault, I mean that in the most complimentary way. The drumming may have come from the stage of the Hall Theatre, but it was almost as if they were drumming inside you, rattling your bones and liquifying your organs. It was intense from the upper balcony area; I tremble to think what it must have been like closer to the stage.

There is a rudimentary plot at work in For Love’s Sake, but it felt like more of a gateway for Miike to work with what really seemed to interest him: the hyper-reality of musicals. The film follows two mirrored pairs of would-be lovers: the main pair, a bad boy hoodlum (scarred by the suicidal mother who abandoned him as a child) and the bourgeois girl who is trying to reform him, contrasted with a secondary pair of lovers, a psychopathic mean girl, and her 17-year-old boyfriend, who is cursed to look like a 40-year-old gangster and who fights as though he has the fighting experience that his face and body claim.

The film is very funny in an odd sort of way. Many of the joke set-ups are obvious quotes from Yûdai Yamaguchi’s Battlefield Baseball and Deadball films, which is strange because Yamaguchi was clearly quoting Miike in those films. Miike could quote himself, but he appears to have chosen to do so through the lens of another filmmaker, adding to the artificiality of the scenario. Miike then adds another bizarre twist by soft-pedaling and dead-panning the punchlines. Where Yamaguchi’s humour is Three Stooges by way of Rick Baker, Miike uses those setups but then delivers the punchlines like a Japanese Stephen Wright. It is still incredibly funny but disconcerting, leaving you off-kilter and out of balance.

It is during a musical sequence featuring good girl Ai (Emi Takei)’s parents that Miike’s grander aims become apparent. Ai (and by extension, the audience) realizes as she is watching her parent’s “performance” that we all build an internal cinematic world to explain the universe to ourselves, acting as our own screenwriters, directors, and producers. The benefit to Miike of using the musical genre is that it forces his characters to reveal their own internal illusions through the hyper-reality of the genre. What Miike is doing is nothing less than peeling back the fabric of the universe to peer at the Jungian clockwork mechanism inside all of our heads.

It was at this point that the film began to overwhelm me. It wasn’t just Miike trying to conjure the Lovecraftian darkness hidden in the human heart; the print added to the sensory assault by broadcasting in 4 languages: English through sub-titles, French through (larger) sub-titles, Japanese through dialogue and music… and the language of pure cinema. I don’t pretend to understand any Japanese, but after you have attended enough Japanese films, you become familiar with the language patterns, and words and phrases begin to make sense. In a sense, everything that was said on the screen I was receiving in fragments and at different times as the English and French sub-titles were not only different from one another, they were also timed differently – and not in a predictable way – sometimes the English sub-title showed up first, and sometimes the French did, sometimes both showed up before the Japanese phrase they were translating.

It was here that my eyes started watching two different films. It wasn’t so much that I got cross-eyed as my right eye started watching one Miike film while my left eye pursued another. By closing one eye or the other, I could choose my Miike channel. With both open, the effect wasn’t so much stereoscopic as the broadcast of the film on some hitherto unimagined cinematic fifth dimension. Like Louis Del Grande, I was Seeing Things that man was not meant to see and could never understand.

I staggered from the cinema to make sure that my eyes still worked. (I had two eye operations not that long ago and I am understandably paranoid about them.) Focusing on Mitch Davis in the lobby, I quickly regained my bearings and verified that the problem was not my eyes or my brain, but the combination of the two added to Miike’s vision and that demonic print.

It may not have been my smartest decision to get back on Miike’s roller-coaster, but I did. I know what happened in the film. I understand the sequence of events. I have good memory for films, especially ones that warrant attention. But I can make no sense of this. My memories of the film are like notes written in my handwriting that now appear to have been dictated to me in some foreign language.

I was not. I should make clear the member of the audience who appeared to have an epileptic seizure during the screening and was carried out.

I don’t pretend to understand what they experienced or what they went through. I do not suffer from epilepsy. But I sympathize with their physical, emotional, and mental distress.

Takashi Miike melted my brain too.

‘Looper’ is Trilling, Inventive and Energetic