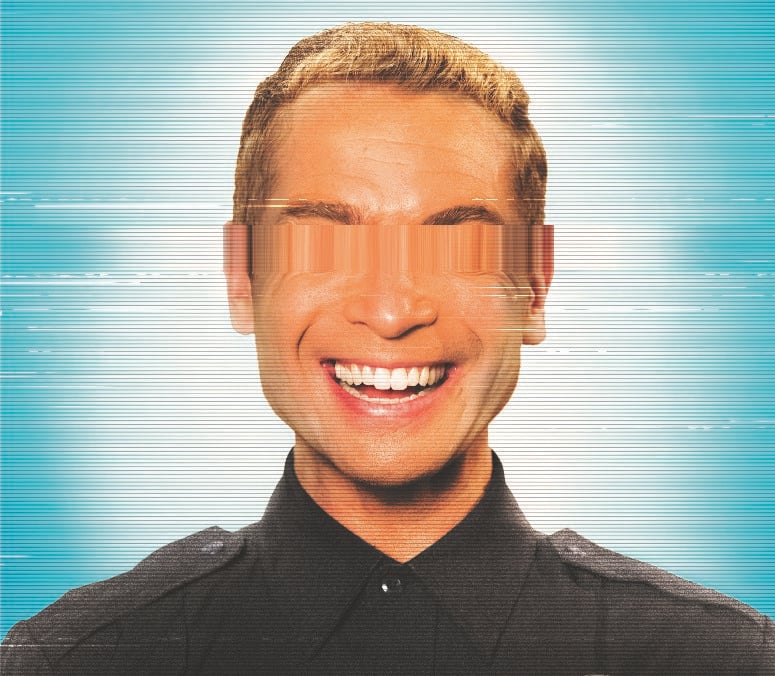 Quinn Armstrong’s feature debut, Survival Skills, is one of the strangest films at Fantasia Festival this year. Centered around a newly recruited police officer in his first year on the job, the movie uses a meta-narrative and distinct aesthetic to paint a grim portrait of someone ill-equipped for the world around them. Survival Skills begins harmless enough before quickly spiraling into a bleak examination of a system that can drain the good intentions out of anyone.

Adapted from the 2017 short film of the same name and inspired by the weird police training videos of the 1980s, Survival Skills starts off fittingly picturesque. Jim (Vayu O’Donnell) has just joined the Middletown Police Department and is excited to get to work helping the innocent. Framed as the audience’s guide through Jim’s first year on the force, Stacey Keach narrates and presents the instructional video that goes over what to do and not to do as a police officer. In Jim’s first official call on the job, his sunny bright demeanor is quickly tested by a domestic violence report. As he dives deeper into the case, he finds himself plunging further and further into the darkness that makes good men go bad.

Presented as an instructional video in itself, there’s a quirk inherently present throughout Survival Skills. Armstrong manages to inject humor throughout with the help of O’Donnell’s charismatic and hopeful performance. Combined with the video aesthetic, it’s a humorous movie that very quickly sheds its humor. Instead, the film quickly devolves into a dark drama that takes viewers on a journey through moral corruption. That one domestic violence call sets off a trigger of events that makes jokes and weird scenarios so difficult to stomach.

Survival Skills naturally moves from its sunny demeanor to a searing gaze at a world in which doing what’s right isn’t easy. Virtually every joke from the short film is used in this feature-length version, but the ways in which it expands upon the brief wickedness is what justifies the film’s expansion upon its source material.

There’s a great tone set throughout that Jim feels otherworldly in his kindheartedness. Everyone else is already broken down. In fact, they’re all relatable. It’s in Jim trying to do the right thing that feels so out-of-place. Planting a character who is nice in a world that has lost all understanding of the feeling is just one of the many ways Armstrong places a mirror on the audience. At first, we’re laughing at Jim because he’s so gullible and naive. By the time the movie starts kicking into its second act, it’s difficult to find the humor in the situation.

Survival Skills is more impressive in how it confronts viewers with their own convictions and attitudes.

Stacey Keach’s narrator is another interesting character in the film. He fits the framing device, but as the plot moves further and further away from the instructional video aspect, his inclusion feels out of place. While endlessly enjoyable to watch as he makes jokes at Jim’s expense and tries to keep the video on track, he appears to be an afterthought when the plot gets moving. He becomes less a guide and more of a commentary on the way we try to move on and ignore the harsh realities of the world around us. This is just another example of Armstrong settling a mirror in front of the audience.

Initially a fun premise, Survival Skills is wonderful because of its acute ability to take something novel in premise and shine a light on the audience. Even more compelling is its use of the instructional video – a seemingly safe and sterile presentation of something – to abstractly explore the reasons instructional videos exist in the way they do. No one properly prepares people by showcasing the difficult choices that might have to be made – and the subsequent toll that those may have on the people making them. It is difficult to find the right answer to a situation, even when there’s a clear distinction between what is morally right or wrong.

Quinn Armstrong has a very distinct voice in his feature debut – one that could be because of the narrative and the aesthetic used to frame it. Yet, even without that, there’s an undeniably profound understanding of how to use a meta-narrative like Survival Skills and turn it around on its audience. There is enough in the film’s depiction of someone losing hope in the crusade for justice that viewers will get plenty of entertainment. Survival Skills is more impressive in how it confronts viewers with their own convictions and attitudes. Perhaps most importantly, it asks if the problems with society are those policing it or the reasons we need police in the first place – or maybe it’s a bit of both.

Fantasia Film Festival 2020: Air Doll— the Story of a Life-Size Blow-Up Doll Which Develops a Soul