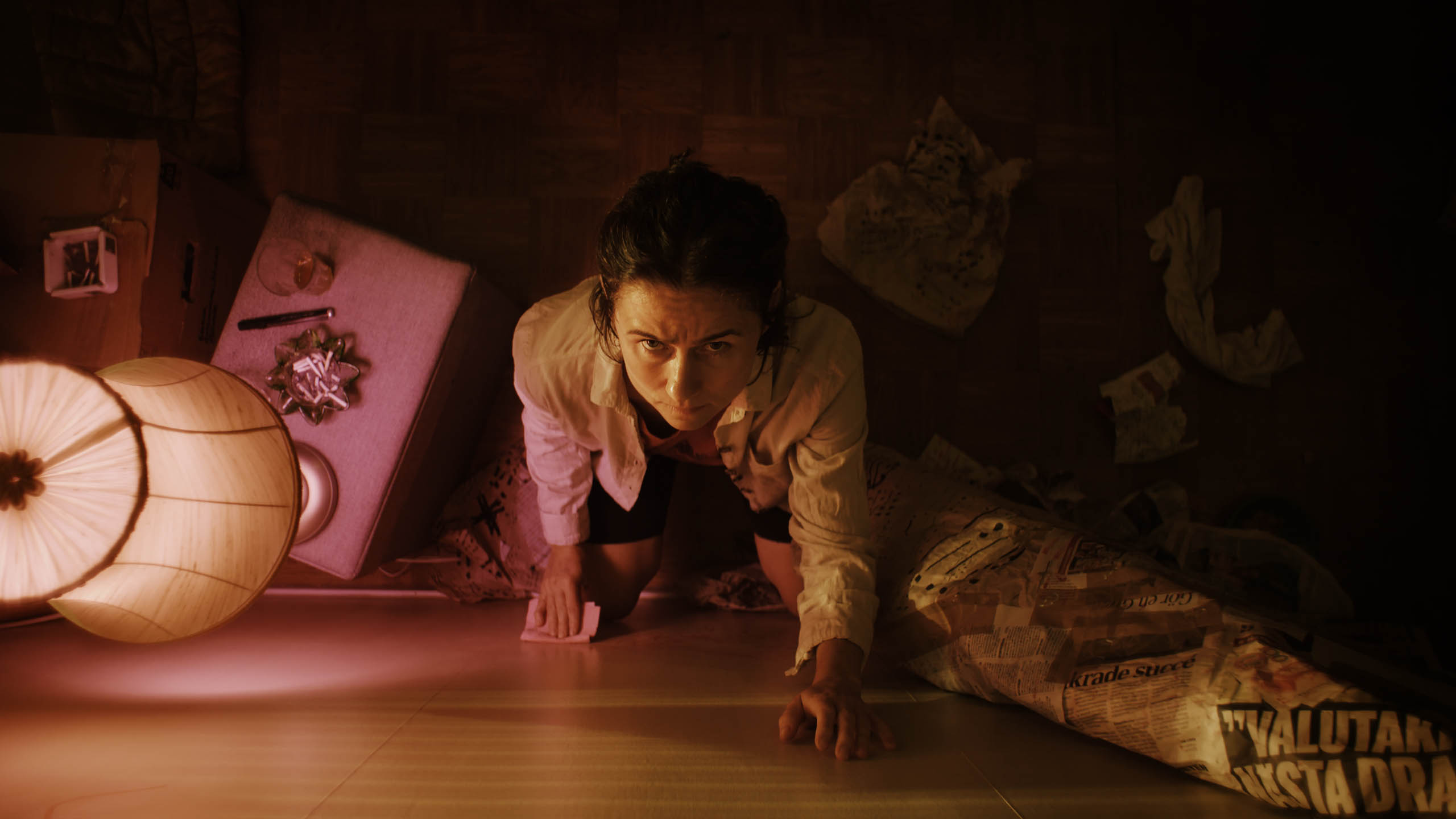 In Frida Kempff’s Knocking, a woman struggling with the residual effects of trauma and tragedy begins to question whether she’s the witness to a slow-moving crime or if she’s merely losing her mind. Kempff shows off a striking sense of style that highlights the disconnect of Molly (Cecilia Milocco) from the world around her, which will keep viewers guessing until the final minutes. But the brief movie, which runs just under 80 minutes, suffers from rushed pacing toward the end as it tries to cram in clues to answer its mystery.

The film opens with Molly and her girlfriend enjoying an idyllic day at a Swedish beach. The lovers share a sweet embrace on their beach blanket before Molly settles down for a nap and her girlfriend runs off into the water. It’s the last time they’ll ever see each other. We see Molly again months later as she’s leaving a mental hospital. She seems disconnected from the world around her and nervous at the prospect of rejoining it after so much time hidden away. Luckily, a small apartment has already been set up for her to move into as soon as she leaves. It’s a depressing flat, but she seems to relish a newfound sense of independence, even as it frightens her. One of her first acts back on the outside is to buy more fruit than she could ever eat before it rots amid a sweltering heatwave. It’s not that she has a serious hankering for fruit, but she’s trying to assert control over her life again, even if it’s over something as mundane as what food she buys.

But Molly’s attempt to start all over is threatened when she starts to hear a dull knocking in her apartment. The sound seems to be coming from somewhere on the floor above, but her attempts at first to get her neighbors to quiet down don’t go anywhere, and soon she starts to wonder if the sound might be a figment of her imagination. No one else in the building hears the knocking, which drives her into an increasing frenzy. When she resorts to calling the police, she ends up being threatened with having her phone line disconnected for making unwarranted calls.

Kempff expertly builds the tension through her use of camera placements as Molly’s sanity begins to crumble. She often places the camera up by the ceiling so that it looks down on her actress, encouraging her audience to question whether something going on up there or if it’s all in Molly’s head. The film is bathed in a sickly yellow light in most of its interior scenes, which isn’t the most pleasant to look at, but it fits with the yellow light from the incandescent bulbs Molly uses — an odd bit of naturalism in a film that often stretches the bounds of reality. Milocco does an impressive job of conveying her character’s vulnerability and feeling of being unmoored from reality. She’s able to expertly use little tics to communicate Molly’s nervousness about returning to the outside world without any significant support system, though she never pushes it into a hammy schtick.

Knocking seems inspired by Rear Window (1954), as Molly begins to snoop on her upstairs neighbors to try to find the source of the knocking, even though it may just be a figment of her imagination. But that classic film works because Hitchcock shows just enough of a possible murder and its coverup to make it possible that Jeff has been witness to a crime. When it turns out he was correct, we don’t feel like the film cheated us. But Knocking skips those details that could bolster Molly’s fears that something had gone wrong, and it also doesn’t clarify enough whether she’s really suffering from mental illness. The ending isn’t worth revealing, but when it arrives, plenty of viewers will feel cheated, as if it was made up at the last minute. Perhaps a long film would have given Kempff more room to build up to a satisfying conclusion, but as it stands it’s much too rushed. Considering the movie is only about 78 minutes, another five or ten minutes wouldn’t have made it overly long and could have more tastefully led up to the denouement. Knocking could have been a stylish, chilling thriller, but the surprise ending is more likely to elicit laughter than the sense of catharsis it was designed for.

Final Girls Berlin 2021 Puts the Patriarchy in the Periphery

Sundance 2021: Judas and the Black Messiah is Powerful Political Cinema