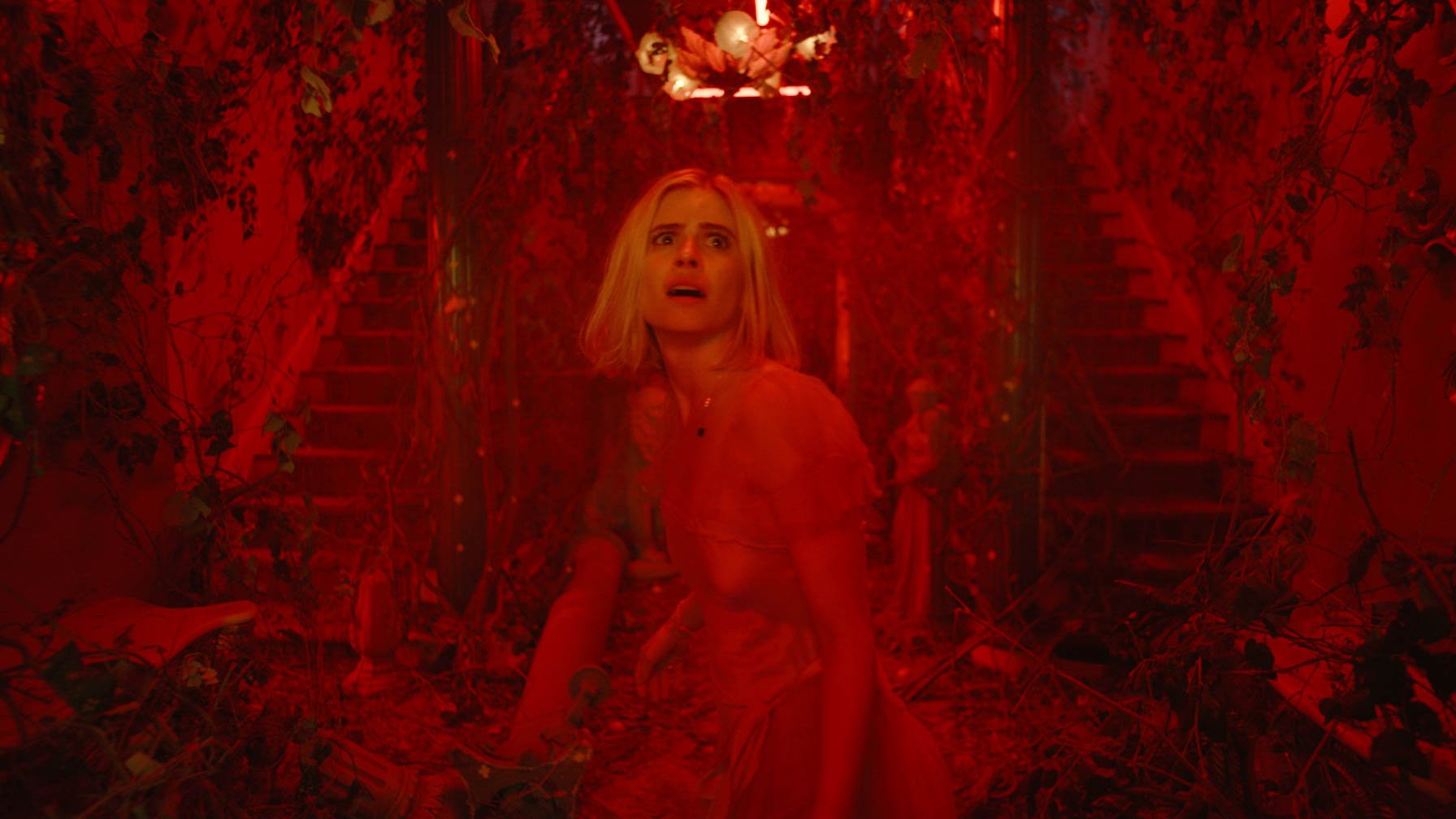 Carlson Young’s feature directorial debut, The Blazing World, is an ambitious fantasy horror film that is heavily influenced by so many cinematic touchstones that it can’t help feeling overstuffed. It’s a visually dazzling film that is barely held together by a narrative that echoes both Alice in Wonderland and The Nutcracker but not as elegantly structured as either. Divided into sections that prod at different facets of the protagonist’s fears and relationships, Young spares no expense on her first crack at making a feature-length film. However, underneath all the excess and fantastic performances is a movie that struggles under its own lofty goals and ends up feeling like films stitched together.

Young isn’t working from scratch here, as she and Pierce Brown (author of the Red Rising Saga novels) adapt her 2018 short film of the same name from an interesting concept drenched in atmosphere to a feature-length film. Margaret (Young) witnesses the death of her twin sister in her family home as her parents, Tom (Dermot Mulroney) and Alice (Vinessa Shaw), fight again unaware of what the kids are up to. It’s a scene that’s very akin to 1973’s Don’t Look Now and the influences don’t stop there. A strange man (played by Udo Kier) appears near a portal and beckons Maragaret in, whispering atop the wind that she could save her sister.

Cut to the present day and Margaret is obsessed with the potential of another realm and believes there may be a chance to save her sister if she goes into the portal. Since that tragic event, she suffers hallucinations on a frequent basis, and hides her depression. Her only coping mechanisms are drugs and cutting herself – one of many sensitive subjects the film indulges, as well as alcoholism and domestic violence. Once she finally finds herself down the rabbit hole, she begins a quest to save her sister and conquer her own demons in the process.

Once The Blazing World begins exploring the metaphysical realm and Margaret attempts her rescue mission, the film blossoms into a sumptuous feast of intricate production design and vibrant colors. The film separates its quest into separate areas, feeling a little bit like a video game, with the pervasive darkness even pushing Margaret into particular areas to maintain linearity. Perhaps more aptly, they feel like short films cobbled together, each one striking at a specific anxiety in Margaret’s head. Each one is visually impressive in its own way, aided by some strong cinematography from frequent Richard Linklater collaborator Shane Kelly, but it does lead to the movie’s problem of feeling like it’s packing too much within a measly 99-minutes.

There’s not even an excessive amount of time spent setting things up. The most lengthy sequence before heading down the rabbit hole feels like the visit to The Woods – a local watering hole and venue near her parents’ place. There plays out a tarot card reading between friends that foretells Margarets impending journey, but also draws allusions to the tea party sequence in Alice in Wonderland. It’s also the scene that evokes more modern teen drama/horror like Chilling Adventures of Sabrina or Riverdale in both its aesthetic and interactions.

However cheesy those moments can get, they’re few and far between. The quest to save her sister is what makes The Blazing World interesting and is elevated by its performance. Young is playing a young woman still frightened like a child of the real world, constantly hiding behind vices. She hasn’t had the opportunity to become an adult because she hasn’t appropriately grieved her sister’s death. It’s a compelling performance that pales when set against the sinister Cheshire Cat-type played by Udo Kier – delicious chewing scenery as he does best. Mulroney embodies an abusive alcoholic so he gets to be a bit wild, and the despondent mother played by Shaw is performed with a manipulation and erraticness that’s tense.

There are a huge cast and crew here of talented people, but The Blazing World’s saving graces are very obviously the things that keep a steady throughline: Kier and Young’s abilities to command the screen, the elaborate production design, and a score that utilizes Tchaikovsky to create a fairytale-like sound from Isom Innis (best known for being in the band Foster The People). His score alternates between haunting and over-the-top as Margaret descends further into her quest, not necessarily adding layers to the film but doing a great job in enhancing every scene.

The Blazing World isn’t going to impress everyone as its story is fairly mundane due to its obvious inspirations, and the way it is put together feels haphazard at best. There’s an ambition though that kept me involved and waiting to see what would happen next, even if it just meant that I might get a little bit more of Udo Kier’s wonderfully hammy performance. Young’s exploration of trauma feels like it is more interesting than it really is, boiled down to a few contrived gatekeepers that antagonize her own personal anxieties. It makes for a well-paced film, but one that leaves little to the imagination despite its imaginative universe.

Sundance 2021: Mass Fails Its Powerful Performances with a Lacking Screenplay