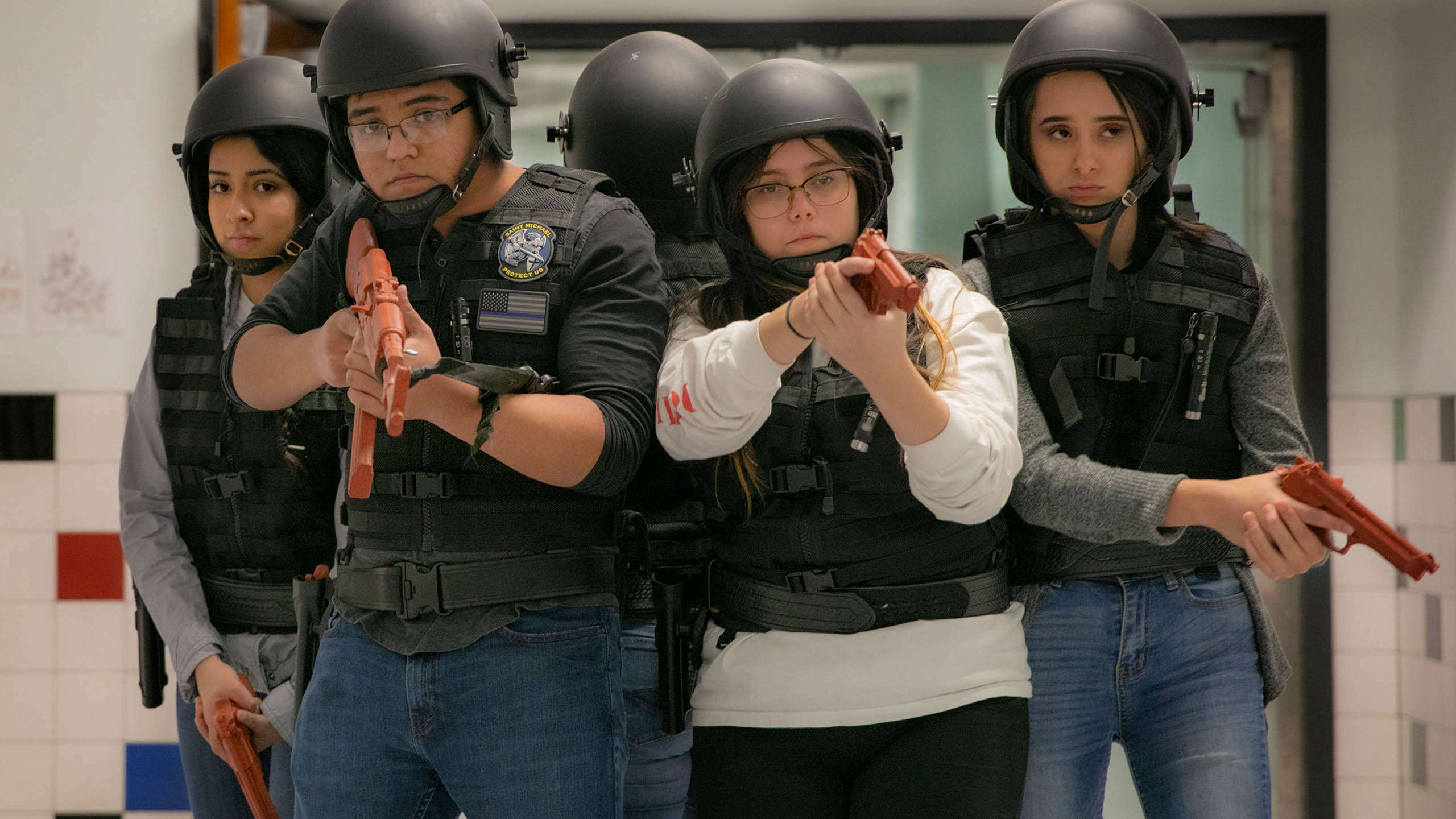 Whatever their feelings about the nature and morality of law enforcement, Americans have been forced to grapple with the role of policing in their lives in the past year. Race, sexuality, and demographic factors have allowed some Americans to feel insulated from those conversations, but the nationwide protests that erupted following the police killing of George Floyd and other Black Americans made it impossible for others to ignore how law enforcement disparately impacts communities. In Masie Crow’s compelling documentary At the Ready, she zooms in on one Texas border community that is intimately entwined with police. At Horizon High School, just east of El Paso, students interested in joining law enforcement, whether as police officers, Immigration and Customs Enforcement (ICE) officers, Border Patrol agents, or members of the FBI, can join an after-school club where they’re taught how to achieve those career goals (though plenty of people will see it as simple indoctrination). Crow avoids making her own politics shine through too brightly, frustratingly so at times, but she’s crafted an utterly compelling look at a pipeline to policing that will be utterly foreign to many.

From the start, the ethnic makeup of policing in El Paso is abundantly clear. Most of the students at Horizon High School are Latinx, and seemingly every person involved in the Law Enforcement Club is as well. One of the former police officers who now works as a teacher at the high school admits that ICE and the Border Patrol seek out Hispanic students because they’re seen as having an advantage at policing a population where most people can speak Spanish and have roots south of the border. Some of the club meetings aren’t too dissimilar from a regular class period, as the students discuss and debate news stories related to policing, including reports of a migrant caravan marching toward the US. Even though the caravans were still thousands of miles away from the southern border in 2018, they became the closing argument of former President Donald Trump ahead of the 2018 midterm elections. In At the Ready, the Law Enforcement Club members stage a debate over the severity of the caravan and whether federal troops should be dispatched to subdue it, with many of the girls on the side of the less aggressive response, whereas most of the boys are convinced it’s a mortal danger that requires the military’s assistance. (The issue ultimately fizzled out and failed to provide an election boost, as Democrats retook control of the House of Representatives.)

Crow show’s how financial stability is such an alluring aspect of a career in law enforcement for these high school students. The jobs can make around $100,000 in four or five years, and even the starting pay is well above the median income in that part of Texas. So even some of the students who seem genuinely distraught by the moral quandary of joining various law enforcement agencies can’t help but salivate over the prospect of financial security and being able to help support their families. Crow singles out three students who have compelling and disparate backgrounds, all of whom are somewhat less susceptible to the pro-law enforcement propaganda of their teachers. But At the Ready might have been a stronger portrait of this kind of club if she had been able to feature more in-depth interviews with the most pro-cop members of the Law Enforcement Club. Perhaps they were fearful of the political implications of the film, or perhaps Crow simply didn’t feature them much in the final cut. During one off-hand moment, one of the teenage boys jokes that he wishes he could just beat up suspects to make his job more efficient, which unfortunately goes uninterrogated.

The most moving section of At the Ready comes late in its runtime when protests against the Trump administration’s family separation policy pick up across the US. One student questions her choice to join the border patrol and is devastated when Republican Senator Ted Cruz wins another term in the Senate. The same events seem to give some questioning students the push they need to abandon the club. It’s unfortunate that Crow didn’t continue her film into 2020, as it would have been fascinating to see how the protests inspired by the police killings of George Floyd, Breonna Taylor, and too many others would have been dissected in class, though she likely would have been dealing with a different group of students at that point. There were also times when I wished she would have dropped her shield of objectivity and simply asked the students how they squared news events with their own moral systems. There are plenty of on-camera interviews (with Crow’s questions edited out), so why would she choose not to ask questions that get at the heart of what she’s examining via more circular means? The mask of objectivity doesn’t always serve At the Ready well, but the documentary is still a fascinating portrait of the high school–to­–police pipeline. It’s a movie that forces us to examine our own feelings on the subject, something only the best nonfiction films can aspire to.

Sundance 2021: The World to Come Is a Poignant Period Romance With a Stellar Cast