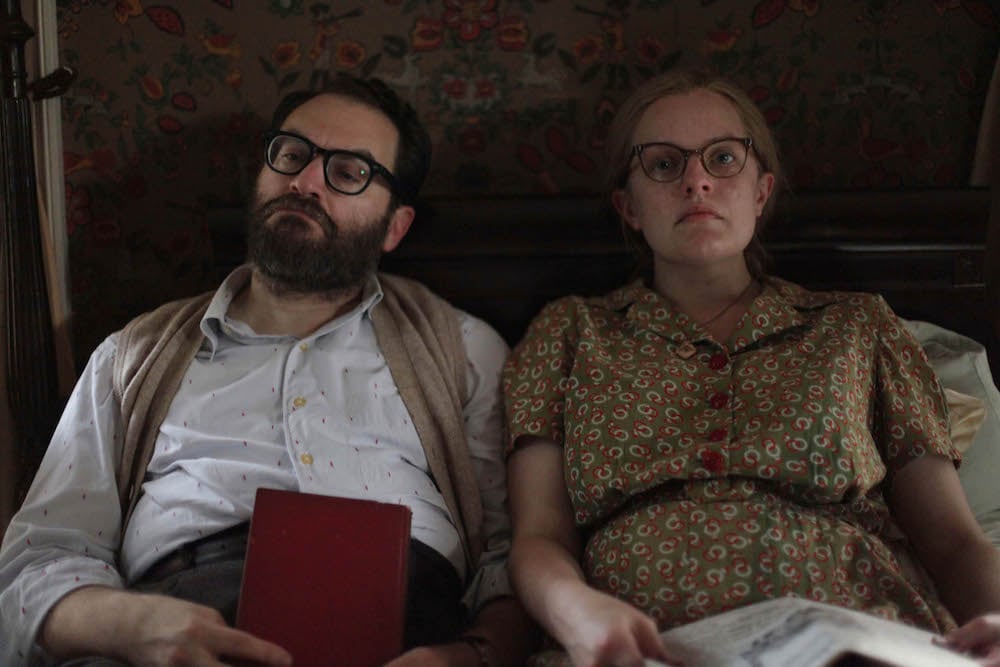 Something is amiss from the opening moments of Josephine Decker’s newest feature, Shirley. A young couple, Fred and Rose Nemser (Logan Lerner and Odessa Young) are taking a train to Bennington College, where he’ll be teaching. Rose reads a recent issue of The New Yorker featuring Shirley Jackson’s now-classic short story “The Lottery,” dating the scene to 1948 or ’49. The story, about a (spoiler alert) woman who is stoned to death as part of a community ritual, doesn’t arouse the expected response in Rose. Rather than being horrified, she’s excited, even turned on by the tale, and she initiates a quick tryst with Fred out of sight of the other passengers. Like Rose, Decker seems thrilled by the most sordid and disturbing interpersonal relations — and by the film’s end, much of the audience will be too.

Though the film opens with Rose and Fred, Shirley is most concerned with the eponymous Jackson (Elisabeth Moss). Despite being a critically and commercially successful writer, she’s not considered much more than a faculty wife to her husband Stanley Hyman (Michael Stuhlbarg), a professor at Bennington and a respected literary critic. The Nemsers are set to move in with Jackson and Hyman for a short period until they’re able to find a place of their own in town. Stanley will mentor Fred, who will deliver some of his lectures in hopes of getting his own course load and, eventually, tenure. But from the start, Shirley has an unhealthy fascination with the couple, especially Rose. As she begins to plot out what will be her second published novel, Hangsaman, she begins to spy on the young woman, intruding on the most intimate moments of her life. At the same time, she absorbs herself in news articles about Paula Jean Weldon, a Bennington student who disappeared in 1946, and her interests begin to coalesce in a clear nod to Ingmar Bergman’s Persona (1966).

Decker’s disorienting style, which animated much of Madeline’s Madeline, makes occasional appearances, but she’s more restrained in how she films her characters. In her earlier films, which she wrote by herself, her eye-catching and disorienting style was a way of making up for long sections with little dialogue, but that’s not necessary with Sarah Gubbins’ more traditional screenplay. Gubbins sensitively portrays Shirley’s life as an underappreciated artist and delves into the ways her work tears away at her personal life and her mental health. Her husband’s dalliances with his students and other faculty wives don’t help.

Moss and Stuhlbarg’s repartee and bouts of sadistic marital games will surely draw comparisons to the couple in Who’s Afraid of Virginia Woolf?, but they have a more tender relationship than those famous bickerers. Stanley is condescending and even tyrannical at times when it comes to their personal lives, but he’s Shirley’s biggest champion and a believer in her literary greatness. Stuhlbarg makes it clear that the character has great affection for his wife, even if he chooses to have sex with anyone but her. Moss delivers another in a series of great performances that seem to be in dialog with her work for Alex Ross Perry in Queen of Earth (2015) and Her Smell (2018). Decker, Gubbins, and Moss all work together to create a portrait of an artist’s creative process, and we see how Shirley absorbs Rose and Paula Jean’s lives to inspire her fiction. So often, movies about artists merely gloss over the act of creation to focus on the most dramatic elements of their personal lives, which makes the art seem as if it miraculously came into being. In Shirley, we see the heartbreak and conflict required to create great art, or at least required to create Shirley Jackson’s art. Decker may have calmed down her frenetic style this time around, but it was only in service of her most compelling story to date.

Vitalina Varela Is a Love Letter to Faces

Ai Weiwei’s Vivos is a Somber Requiem for Democracy