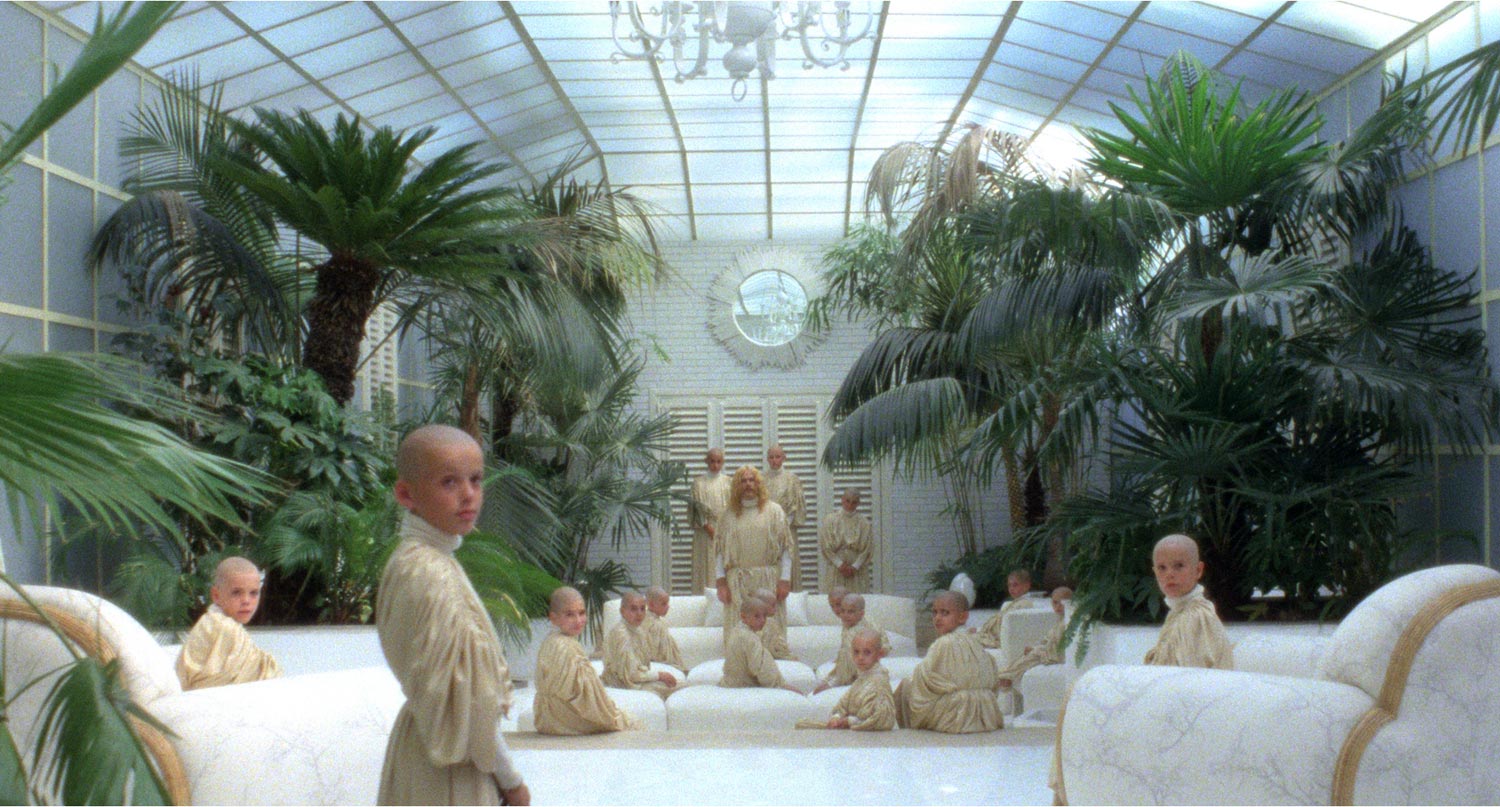 This Euro-American science fiction horror clusterfuck was directed by professional body builder Giulio Paradisi (credited as Michael J. Paradise), who made four other films, but is best known for shooting second-unit footage on Federico Fellini’s 8 1/2. It was the brain child of producer Ovidio G. Assonitis – known for his poor quality attempts at cashing in on box office gold by cloning Hollywood’s biggest hits. Assonitis was a hack, with a reputation for producing flagrant knock-offs like the 1977 Jaws rip-off Tentacles (starring John Huston and Shelley Winters) – and Beyond the Door, the most successful of numerous Italian horror films produced in the wake of The Exorcist. In the dawn of ’70s American blockbusters, European production companies emerged stateside, attempting to emulate the success of their American counterparts. Of the hundreds of these films produced, The Visitor is perhaps the most ambitious of all; a surreal, low budget hybrid that takes inspiration from Alejandro Jodorowsky, Steven Spielberg, Alfred Hitchcock, William Friedkin, Roman Polanski, Brian de Palma and George Lucas, to name a few.

The plot, such as it is, follows legendary Hollywood director/actor John Huston as an 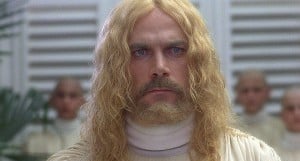 intergalactic warrior who joins a cosmic Christ-like figure (Franco Nero) in a battle against an eight year-old girl named Katy (Paige Conner) with a penchant for evil, and a pet hawk by her side. The film opens with Nero walking though a desert storm under a radiating blob of sun where he meets Huston decked out in a Obi Wan Kenobi Jedi-like robe. After a non-climatic Western-like showdown, we cut to a room full of bald children who are told a story of the battle between Sateen (evil) and Yawheh (good). It seems, Sateen visited Earth and fathered Katy with a woman named Barbara (Joanne Nail). Now it’s up to Jerzy Colsowicz (Huston) to go undercover as a babysitter, and prevent Barbara’s husband, millionaire Raymond Armstead (Lance Henriksen) from getting her pregnant again. The master plan is for her to bear a son, who will then mate with Katy and bear a grandchild who will somehow contaminate the cosmos. The movie opens with scenes reminiscent to a Jodorowsky flick, transitions to a sports movie, then domestic drama, and eventually plays out like a remake of The Bad Seed, with a bit of corporate intrigue, a murder investigation, and some alien abduction thrown in. There’s a house-of-mirrors showdown that borrows from the iconic hall of mirrors sequence in Orson Welles’ The Lady from Shanghai – a deliriously well-staged car chase inspired by Hitchcock’s The Birds, a bizarre foot chase through the streets of Atlanta, an odd gymnastics routine, and even a figure-skating sequence in which Katy displays her telekinetic powers. There’s also an NBA game between the San Francisco Miners and the Atlanta Rebels which features Kareem Abdul-Jabbar – and cameos by Old Hollywood stars Shelley Winters (The Poseidon Adventure) and Glenn Ford (Superman). And Huston isn’t the only director in front of the camera: Sam Peckinpah also has a minor role as Dr. Sam Collins. Scenes fromThe Visitor recall Close Encounters of the Third Kind, Star Wars, Rosemary’s Baby, The Omen, The French Connection, The Fury and even Dune – but for all of its influences, The Visitor feels remarkably original. Apart from the star-studded cast, the fun in watching The Visitor is never knowing where it’s headed or what crazy set-pieces will come next. With a miniscule budget, and a scattershot screenplay, Paradisi directs to the best of his ability.The Visitor is a very bad motion picture indeed, but it shows flashes of accidental brilliance, and demonstrates the director’s eye for startling imagery. But mostly this curio boasts a strange, unnerving tone: The Visitor is a deeply terrifying portrait of child-parent relationships gone wrong, and in the end, Barbara must decide if she wants to abort her unborn child.

Frequently outlandish and far from profound, The Visitor is a strange movie with a reach that exceeds it’s grasp. It is often silly, but very entertaining, and a pretty curious specimen in its own right.

Ravenous and the Beast Inside