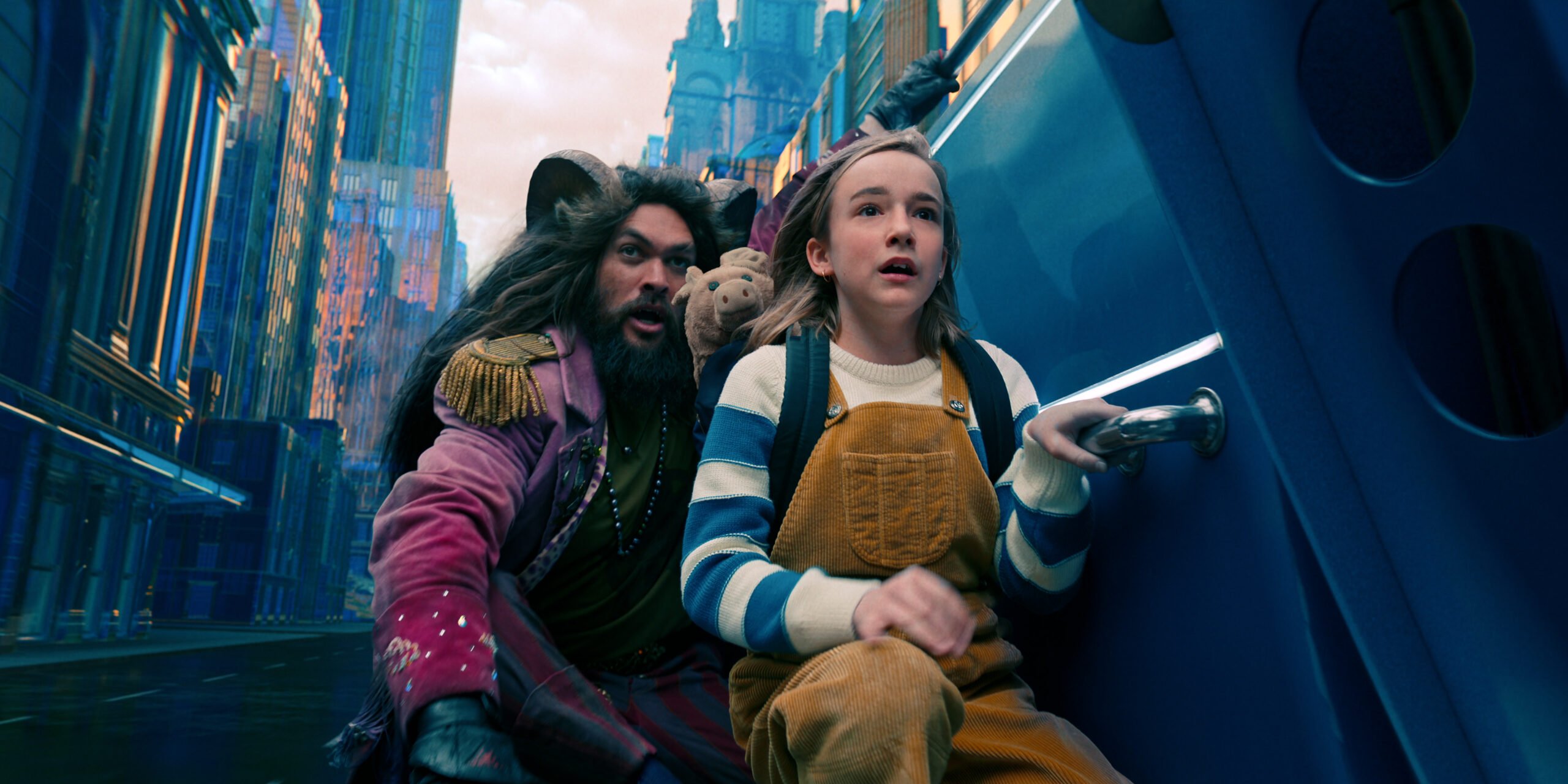 At the very least, Francis Lawrence’s Slumberland is a welcome reminder that movies, where children deal with trauma and grief through a fantastical landscape, are generally dependable. Unfortunately, Lawrence’s latest is a film brimming with creative potential that squanders it on the known as it takes a dreamscape and rarely meaningfully plays within it. A limited imagination and an all-too-familiar narrative of a child coming to terms with grief results in a comfortable but uninspired adventure film that leans too heavily on an unrestrained Jason Momoa performance to stave off boredom.

The adventure begins soon after Nemo’s (Marlow Barkley) father passes away. Played by Kyle Chandler who has cut his teeth on being an excellent on-screen Dad, his brief appearance immediately imbues the film with a warm, fuzzy feeling as he tells stories to his daughter of escapades taken with his brother Flip. Nemo’s life seems to be on the rails as she has accepted that someday she will be a lighthouse keeper just like her father. That is until his untimely demise drags her from an isolated life to the big city under the custody of her estranged uncle, Philip (Chris O’Dowd).

It doesn’t take long of refusing to open up to her uncle, accept her new environment, and try to move beyond her Father’s death, for Nemo to push herself into her own head. Depressed and grieving, she finds a sliver of hope in her dreams when the mischievous outlaw her Father described having adventures with, Flip (Momoa) reaches out for assistance in finding the location of a pearl that can grant the user one wish. Of course, it’s not going to be easy when the only way to travel is through other people’s dreams where if you die, you die for real.

From this point on Momoa becomes a singular force, but not one that’s very fun to be around. His performance is grating with a heavy dose of trying-too-hard. Meanwhile, his character is all over the place in a way that strips the eventual emotional significance of his role to a moot point that the film depends upon in order to have any satisfying climax. Juxtaposed against Barkley’s precocious performance of a child where intellect and logic still rule over reckless endangerment, Slumberland’s dynamic challenges its characters in ways that the screenplay is not equipped to handle. Momoa’s effusive charm may still be endearing in ways, but it is amplified in a film that doesn’t ever match that energy.

The reality of Nemo’s adventure through Slumberland – a network of dreams that are governed by the Bureau of Subconscious Activities – is that it’s actually pretty tame. Restricted by a PG-13 rating, the screenplay from David Guion and Michael Handelman is decidedly restrained further by locking Nemo into a journey through the same handful of recurring dreams over and over with only one of them actually containing any sense of wonder. As Flip repeatedly remarks on how much he loves it in Slumberland, it’s unclear why that is other than that it’s not reality. However, even in Slumberland the most thrilling dream the duo find themselves in is sharing a truck with a tattooed child currently in a car chase.

Slumberland comes out swinging in its initial moments with an endearing father-daughter relationship and a sense of whimsy that is somehow sucked out of the film in exchange for literal whimsy. It takes away the feeling and turns it into a mechanic, but because it has to operate narratively it isn’t very fun anymore. Soulless spectacle takes charge and Slumberland becomes this unwieldy attempt to marry its dream logic with reality in ways that are confounding to think about.

Even in its spectacle, Slumberland really lacks the imagination required. Obvious comparisons to Inception and the works of Tim Burton further solidify the disappointment in how small Lawrence and company dreamed. Again, the most dazzling visuals reside more in the earlier portions of the film with abstraction within dreams represented through human figures made entirely from colorful butterflies, and a story told through shadows and light. For it to be replaced with a plane flying over mountains and a truck driving at high speeds in the rain shows that even with boundless potential, it’s hard to shake realism.

The real travesty is that Slumberland harkens back to films like 1993’s The Secret Garden and 2006’s Pan’s Labyrinth where grim circumstances push children into their imaginations only to come out stronger than before. There’s an undercurrent of sadness to those movies that dictates the structure of the respective films without forcing characters to simply act like adults. Slumberland gets half the way there and gives up, instead shifting into autopilot until it suddenly needs characters to change. Too long for its own good and depending too much on surface-level charm, Slumberland quickly spins itself into a tedious tale of the importance of wonder – without actually containing much of it.

All That Breathes Finds New Lyrical Ties to the Natural World