Unlike other films from The Filmstruck Cram series, such as Shogun Assassin or The Long Good Friday, Brian De Palma’s Sisters is not (at the moment) hard to find. Just last month, The Criterion Collection released a director-approved 4K restoration on Blu-Ray, complete with Bernard Herrmann’s paranoid, roiling score presented in uncompressed, monaural form. Far from an endangered relic or cinematic curio, Sisters represents a different category of Filmstruck offering: the long-awaited refreshed classic, rescued from muddy VHS transfers and now streamable for a fraction of the cost of a Blu-Ray. For filmgoers who are completionists about director filmographies, the value of efforts such as that on Sisters cannot be overstated.

De Palma’s first offering in the vein of the macabre, high-art sensationalism that would become his signature, Sisters is a foundational text for the director’s style. Many of his hallmarks are on display here; canted camera angles, overwhelming homage, splashy blood, unsettling atmosphere, split-screen action, and voyeurism all jostle against one another. Yet, viewing Sisters solely through the prism of its influence on De Palma’s later work would be a mistake, as the film is hardly a rudimentary or immature effort. In telling the story of a former conjoined twin with a murderous split personality, De Palma ably evokes his influences while also presenting his own close-to-fully-formed style.

Margot Kidder stars as Danielle, a woman who was only recently surgically separated from her sister, Dominque. After a date and a night of lovemaking with Phillip, an unsuspecting adman, Philip steps out in the morning to refill a prescription for Danielle — who has become noticeably agitated. Upon his return, Philip is brutally murdered by Dominique. Or was it Dominique? De Palma spins mystery out of the killer’s true identity, and suspense overtakes the film once Danielle’s neighbor, Grace, witnesses the murder and begins to investigate what she saw. 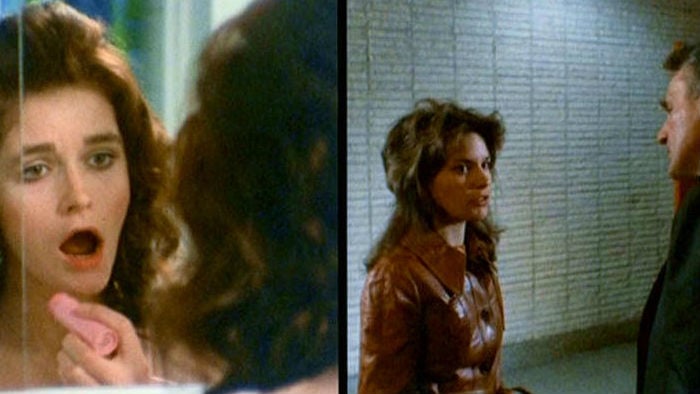 So much of Sisters focuses on a who-saw-what mystery — unsurprising, given De Palma’s relentless cinematic quotation of Hitchcock, who made voyeurism a kind of ethos. Grace (Jennifer Salt), a tireless local reporter, sees Philip’s murder because she was looking through Danielle’s window from across the courtyard. She continues to spy on Danielle, even hiring a private investigator to help. At the risk of making a rote observation, De Palma’s style — the probing nature of his camera movement, and the use of split-screen perspective — ensures that we, the audience, are spying along with Grace. The director withholds crucial information from the film’s voyeurs and its audience, highlighting the fragmented nature of images stolen from afar. In the film’s closing shot, with the private detective completely isolated and observing Philip’s corpse from afar, De Palma seems to be underlining the futility of watching at all; the case has been closed, but the detective still watches, waiting for something to happen. Who know’s how long he’ll be there, waiting and watching, with nothing to show for it.

There are plenty of other readings of Sisters, which helps explain the appeal of De Palma’s peak output. Even though the film swerves all the way into the sensationalism that was merely a facet of Hitchcock’s most lurid offerings, the director buries plenty of ideas to unpack beneath a façade of titillation and nonstop suspense. Like Rosemary’s Baby (from Polanski, De Palma’s other oft-cited influence), Sisters comments on women’s liberation and sexual enlightenment, framing Danielle’s urge toward domesticity as the impetus for the event that fractures her psyche and makes her monstrous. On her date with Phillip, Danielle assures him that she isn’t a Women’s Liberation type; later, we learn that her desire to have a husband and family first lead to her separation from Dominique, as well as the cataclysmic fallout thereafter. Her split personality and murderous actions serve as a morbid reminder of the cost of her desire for a traditionally feminine role.

Sisters is richly layered with ideas to unpack, including remarks on institutional racism and misogyny in the police force, while offering in Grace and Danielle women who are professionally or psychosexually oppressed. De Palma should be taken seriously here, although it should be noted that the director’s understanding of psychology and disability is mostly retrograde. Still, as a stylist, De Palma provides an option for those who might wish to take in Sisters on a purely sensory level. The violence is nightmarish and over-the-top, and the bright fake blood within the camera’s blunt framing allows us to be giddily shocked but not overly disturbed. Bernard Herrmann also unleashes an aggressive score, trading subtle suspense for fully ratcheted, euphoric peaks. Sisters is worth watching more than once to allow the subtext to bleed through — after you’ve absorbed Brian De Palma’s gleefully exploitative twists and turns. Grab the Criterion Blu-Ray — or better yet, catch it on Filmstruck while you still can.

How to Make an Entrance #2: Devlin in Notorious

The Filmstruck Cram — Day 7: ‘The Candidate’