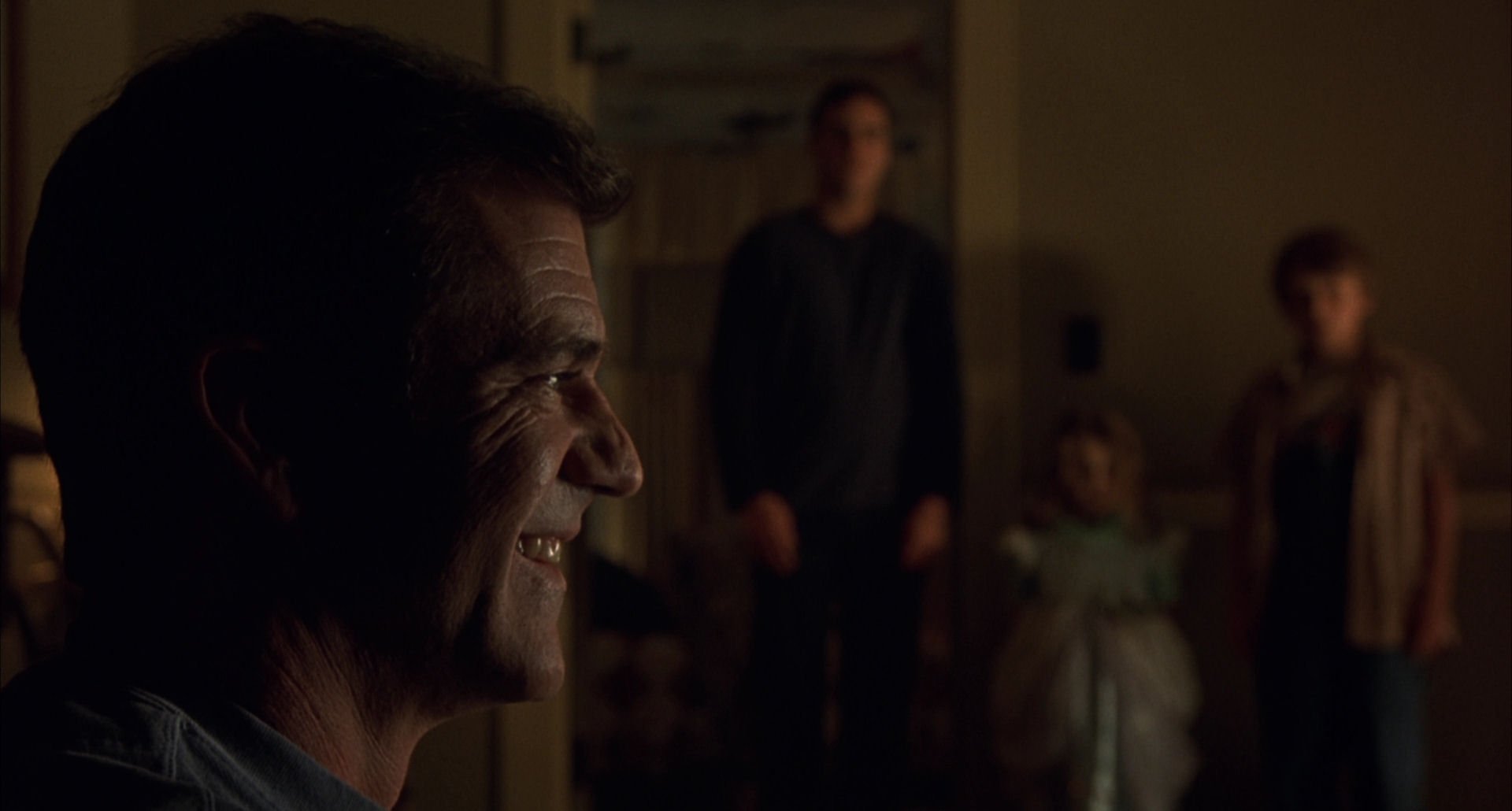 Nearly two decades after its release, Signs – M. Night Shyamalan’s investigation of faith packaged as an alien cartography thriller – can be accurately appraised as the director’s last “good” film, before the stretch of increasingly errant misfires (The Village, The Lady in The Water, The Happening, and – gulp – The Last Airbender). Preceding the mini-renaissance – Shyamalanaissance? – heralded by his next three films, The Visit (not bad), Split (actually good!) and Glass, Signs was an inflection point for Shyamalan’s career, in terms of both reception and form: the last of his films from that period to succeed both financially and critically, and a microcosm of the best and worst of the director’s cinematic tendencies. Its first half is gorgeous, hypnotic, suspenseful; its third act crumbles almost entirely beneath the director’s proclivity for bludgeoning, obvious themes and contrived plot development.

Signs tells the story of Hess family, who discover crop circles in their cornfields while still reeling from the death of the family’s mother, Maureen. The narrative focus remains squarely on the family and their rural Pennsylvania farm as more circles appear worldwide, part of a mapping technique of a race of bipedal extra-terrestrials who appear to be casing Earth, deciding whether or not to do…whatever it is they plan to do (that part is sort of unclear). Graham, the family patriarch, is an ex-reverend who abandoned his faith after the tragic death of his wife; his children, Bo and Morgan, are overly stoic and oddly eloquent, qualities Shyamalan mines for uncanny eeriness throughout the film. Merrill, Graham’s brother, is a down-on-his-luck e- baseball star who lives in the family’s barn.

Signs is ostensibly about the Hesses coping with the implications of an alien invasion and struggling to fortify their house from figures lurking in their field, but Shyamalan insists on telegraphing what his film is really about to the audience, with transparent foreshadowing that detracts from the film’s suspense and draws attention to itself: shots focus on half-full water glasses inexplicably strewn throughout the farmhouse by Bo; in multiple instances, the film painstakingly spotlights Morgan’s asthma; the subject of Merrill’s home-run power is forced into more than one conversation, as is the whereabouts of his favorite bat (mounted on a wall in the house), and the last words of Maureen (“Swing away”).

Throughout these expository scenes and other well-crafted suspense sequences, Graham adopts a certain nihilism as he processes his wife’s untimely death. In his newfound worldview, nothing matters, nothing happens for a reason, but Shyamalan, by insistently and forcibly returning focus to the family’s eccentricities, is obviously suggesting otherwise. The ex-reverend explains Maureen’s dying pronouncement as nothing more than the result of randomly firing synapses, but, as with the glasses, asthma, and the bat, the audience is forced to understand them immediately as important information, if only because each bit of plot jammed into the story feels irrelevant to the looming alien threat. Shyamalan interrupts the film’s otherwise typical jump-scare horror structure to focus on the seemingly erroneous plot points in moments that have all the subtlety of the graphics that once flashed across the screens of early 3D films – only in this case, “PUT GLASSES ON NOW” would read “PAY ATTENTION, THIS IS IMPORTANT.”

Thankfully, no such text mars the screen, thus protecting the greatest assets of Signs: a stunningly rendered setting and periodically gorgeous cinematography. The family lives in a rustic farmhouse isolated on an expanse of farmland, dwarfed by the cornfields that surround it. Shyamalan understands the potential eeriness of such a setting, especially for any viewers accustomed to denser communities, and portrays the setting with a lingering disquiet throughout. The low hum of crickets permeates the film, and in scenes that Shyamalan allows to unfold without the accompaniment of James Newton Howard’s thrilling score, the subdued droning of insects and wind lulls the viewer into a space where the creak of a porch swing or the rattle of a screen door can startle, and even unsettle. The house, with its realistic clutter, worn furniture, and naturalistic lighting, is a vivid backdrop for the Hess family, who are usually either running to respond to a new complication or somberly conversing in one of their cozy rooms.

In those conversations, characters appear in close-up shots that center on their faces and reveal their essence: the wide, blank faces of Bo and Morgan reflect their passivity and their trauma; Graham’s weathered, wrinkly visage is a testament to years lived and tragedies endured; Merrill’s boyish vigor and natural charm is injected with a naked vulnerability when the camera fixates on his glazed eyes and unsure expression. Signs is most affecting in its quiet scenes when Shyamalan lingers long enough to unveil the true selves of his characters, moments that starkly contrast the film’s more common instances of expository dialogue. You learn more about Merrill through Shyamalan’s framing of his face in one poignant late-night palaver with Graham than in the film’s entire trove of references to his ball-playing days.

When Signs punctures its quiet atmosphere with moments of action, the Hess family’s cornfield almost always serves as a backdrop that reminds the viewer of the family’s relative isolation, as well as their disadvantage against an enemy obscured by stalks of corn. The field is rendered by Shyamalan’s camera – always in the crops, moving at pace with the characters – as both expansive and claustrophobic, wide open, and completely disorienting. It provides the setting for the film’s most suspenseful sequences: when Graham first discovers the circles, and later on when he first encounters one of the extra-terrestrials.

Keeping with Shyamalan’s treatment of the aliens throughout the film’s first half, Graham’s first contact with them shows audiences only enough to terrify: a brief flash of a gray, humanoid leg moving through the corn. As with many off-screen villains, the film’s monsters are scariest in the abstract, when the characters – and the audience – receive only a fleeting glimpse, and together are left pondering their terrifying potential. You could attribute this to human nature, the ability of viewers to conjure more fright inside their own head than is possible on a screen, but the truth is that before the focus of the camera, the power of Shyamalan’s aliens to scare frays as quickly as the power of his themes to move.

In the film’s first full shot of one of the beings, a horrified Merrill watches news footage of an alien walking through a party in Mexico. Joaquin Phoenix sells the moment, reeling in terror, hand over his gaping mouth. Truthfully though, as shattering as it may be to understand that aliens are both real and here (both things Merrill already knows at this moment, which makes his visceral reaction surprising), there is nothing specifically frightening about this alien – a tall, gray, humanoid that appears to be enjoying a harmless stroll instead of menacing in any perceptible way. In the film’s climax, as one of the aliens clutches and attempts to poison Morgan, the suspense of the moment is again punctured by the generic familiarity of a monster as unimaginative as any extraterrestrial in recent history.

The unremarkable aliens in Signs reflect Shyamalan’s true priority: to employ his antagonists as sentient incarnations of the family’s demons more than intruders grounded in any sense of reality. For a story that technically unfolds on a global scale, the film remains focused only on how the threat relates to Graham and his family, and how they wrestle with their grief in the face of potential annihilation. The alien is less important in the film’s climax than Merrill’s bat wielded against it, or the water left by Bo that burns the alien’s skin after Merrill topples a few glasses (after Graham implores him to “swing away,” of course). The specific ramifications of the alien poison aren’t as important as the fact that Morgan was saved by a closed airway, the result of his persistent asthma.

Signs concludes when the aliens are repelled, and Shyamalan’s characteristic third-act gymnastics focus on the coincidental trivia, the water glasses, the asthma, mounted bat, and dying words that not only drive the alien from the Hess farm but restore Graham’s faith in fate, as well as his certainty that things happen for a reason. This is a rigorous, pedantic rendering of destiny, crushing in its reliance on improbable minutiae that Shyamalan uses to unpack fate at a nearly atomic level, powering the climactic restoration of Graham’s faith with a mountain of small coincidences.

The problem here is that the magnitude of Graham’s return to belief is dimmed by the film’s assertion that yes, in fact, every single little thing, no matter how erroneous, occurs for a reason. A wife’s death is as important as a child’s behavioral tic, because when the aliens come, both will save the family. This epiphany isn’t one of faith, but certainty. Graham isn’t convinced to believe in the things he cannot see, because after the events of Signs, there is nothing he cannot see, despite the platitudinous comparison of miracles and coincidences he delivers to his brother early in the film.

The incredulity of the events of Signs, and the obvious manner of their unfolding, can be interpreted as neither fate, coincidence, or miracle: they are overt screenwriting devices. Shyamalan crafted a visually beautiful film that doesn’t demand further viewing to reckon with because there is no subtlety in his foreshadowing; after obviously highlighting the water, the bat, the words, and the asthma, his final reveal is less revelatory than obligatory. Graham is truly accepting his role in someone else’s well-paced, pretty, but ultimately overwrought movie. That is distinctly different than an acceptance of the things he cannot change and the courage to change the things he can – it reflects a complete lack of his, and Shyamalan’s, wisdom to know the difference.

Editor’s Note: This article was originally published on August 8, 2017.

The Village Exposed the Glory and Folly of M. Night Shyamalan

The Sixth Sense– is a Well-Aged Supernatural Thriller