Crime fictions, particularly police and detective thrillers, have always had a certain element of distance. The principal work is being done by trained professionals, which sidelines the importance of loved ones and friends; they have to leave the searching to the pros. In Searching, director and co-screenwriter Aneesh Chaganty upends that pattern by placing his subjects (and by extension the audience) into a prime investigative spot. This time, it’s not the detectives who are on the case, but us.

Searching is a film that exists solely on screens — computer monitors, laptops, and smart phones in particular. (There are a few shots of the local TV news, but even those may have been watched on a computer screen rather than a television.) It’s a bold technique, one that has been pioneered by one of the film’s producers, Timur Bekmambetov, who produced a series of horror films all from the point of view of a computer screen. Chaganty doesn’t use Bekmambetov’s exact Screen Life technology, but the product is similar in appearance.

Searching opens with the first use of a brand-new computer around the start of this century. All but the youngest viewers will recognize the Windows XP desktop, with its inviting green hill and strikingly blue sky. David Kim (an excellent John Cho) is setting up the system for his young family — one account for him, one for his wife, Pamela (Sara Sohn), and one for his daughter, Margot (played as a high school student by Michelle La). David documents his daughter’s accomplishments (her piano recitals) as well as smaller, yet no less endearing, moments (her budding interest in Pokémon). 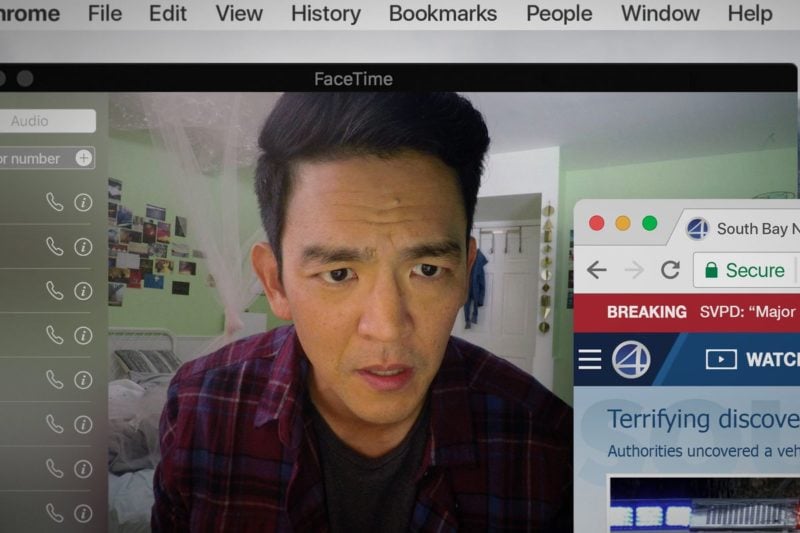 However, through tragedy, David’s family is reduced to only two: him and Margot. They slowly return to something resembling normal, and Margot, now in high school, attends an all-night study session with some of her classmates. In the middle of the night, she attempts to call her sleeping father, to no avail. She never returns, and the following morning David notices that she hasn’t taken her laptop to school like she usually does. A detective (Will and Grace’s Debra Messing) is assigned to the case, but there aren’t any obvious clues as to Margot’s whereabouts. Yet as David begins his own parallel investigation, he starts to suspect that Margot’s life was far more complicated than he ever realized.

Cho, who has been cursed with decades of lackluster roles, finally found a great one in last year’s excellent Columbus. Searching isn’t of the same caliber, but it’s still a wonderful showcase for Cho’s skills, this time set to overdrive. He elegantly straddles the line between a concerned parent and a single-minded obsessive, never quite falling victim to the kind of histrionics that would derail as thriller that’s so clearly set in a very grounded real world. The domestic scenes early on between him and his family are genuinely moving, and they make his later near-descent into madness all the more chilling.

Though Cho’s performance is occasionally extreme, it’s not outside the realm of the possible. However, Chaganty seems to have trouble staying in a world tethered to reality. He occasionally falls victim to Movie News Syndrome, where a fake news program is shown on TV that looks like it was created by someone who has never watched either local or cable news. Puzzlingly, it’s not all like that — some of the broadcasts are quite effective and would strike any viewer in isolation as being the real deal. It’s unfortunate that Chaganty couldn’t keep that feeling up consistently, as whenever we see one of these zombie broadcasts, it pulls us out of the insular world that he’s creating. Debra Messing also has difficultly giving a performance that could exist in reality; her tone and her cadences are cold, almost metallic, and don’t have much in common with the way an actual detective would speak.

As good as Cho is in Searching, nearly so is La as his daughter. She has a tough role, one that requires her to be compelling in her limited scenes, and she underplays everything just right. Teenagers, when they’re not falling victim to volcanic passions, want to stay cool to avoid the constant danger of embarrassment, something that La seems to understand well. It’s unfortunate that we’re not allowed to see more of her relationship with Cho, particularly once it’s just the two of them living together. That dynamicis doled out over time, but we never get quite as much as is desired. Perhaps Chaganty and his co-writer, Sev Ohanian, could have had a more substantial introduction to the family rather than the short montage that currently exists. It’s nicely shot and edited, but by trying to make the live-action thriller version of the opening to Up (2009), Chaganty robs us of the emotional connection between David and Margot.

Despite these deficiencies, Searching survives on the inventiveness of its visual style and Cho’s commanding performance. It’s a surprisingly subtle thriller, which is all the more effective because of how tethered it seems to real life. As we watch Cho through his screens, it’s hard not to let our minds wander to our own use of screens and technology. We’ve surveilled him in his most private moments, but could the same happen to us? And even if someone did have the digital key to our lives, would it make any more sense to them than Cho’s life does to us? The film poses those questions without answers, but there’s a good chance you’ll clutch your cell phone a little less tightly after seeing it.

‘Teen Titans Go! To the Movie’ – A Summer Mash-Up of Juvenile Humor and Self-Referential Wit