Connect with us
'A Rough Draft' has some interesting ideas, but they’re implemented in the most clumsy, half-baked way possible. So at the very least, it has a pretty accurate title.

Adapting a novel into a feature-length film is a difficult task, depending on the length and complexity of the novel in question. While we’ve had some recent example of successful book to film adaptations, it seems that filmmakers engaged in this tricky business fail just as often, resulting in disjointed and muddled end products. Sergey Mokritskiy’s adaptation of A Rough Draft ,a sci-fi fantasy novel by Russian novelist Sergey Lukyanenko, is in many ways the definition of “disjointed and muddled.” While it’s possible this unwieldy mess of a film makes something approaching sense if you’ve read the source novel, everyone else will be left scratching their heads. 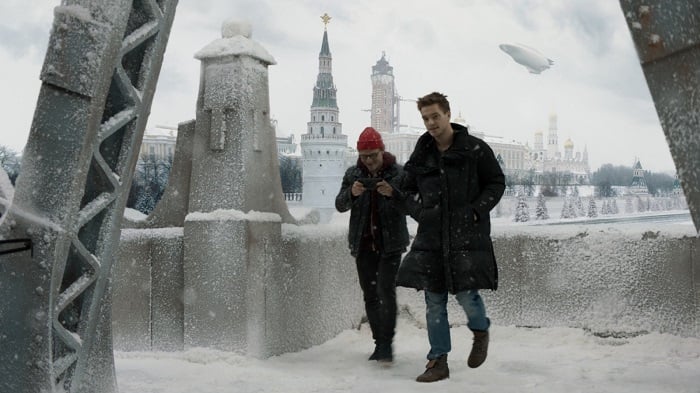 A Rough Draft begins simply enough when videogame developer Kirill finds his life vanishing before his very eyes. His apartment suddenly becomes occupied by someone who claims to have lived there for years, and his attempts to sort this out with the authorities reveal that all records of his life have ceased to exist. Similarly, his friends, co-workers and even family begin to forget they ever knew him. So far, so Kafka, right? But things get significantly more complicated when Kirill learns the reason for all this: he is, in fact, a ‘functional’ — someone possessed of extraordinary (and ill-defined) powers. His new mission, as he’s told, is to act as a kind of inter-dimensional customs agent, presiding over a tower that acts as a gateway between parallel worlds.

This all sounds somewhat straightforward on paper, but it quickly becomes impossible to keep track of the complex lore the film operates on. A Rough Draft sprints through exposition at breakneck speeds, bombarding the audience with too much and (paradoxically) too little information at the same time. We get the basic idea — parallel timelines, dimensional travel, etc. But when the film breaks out concepts like ‘Curators’ — unseen beings who hold some power or sway over this relationship — it becomes very easy to lose track. Basic concepts like characters, motivation, stakes, and the fundamental mechanics of how the world works are all left incredibly vague, and the film moves so briskly that losing the plot entirely is almost inevitable.

It’s very easy to suddenly find oneself three minutes into a scene with no memory of how it started, where we are, what’s going on, and what the current end-goal is. It’s the kind of film that makes you feel like you’re blacking out and losing whole sections of the plot, but the truth of it is just that this is incredibly bad storytelling.

This is something of a shame, as A Rough Draft at least has some interesting visuals and an overall polished (if often cheap-looking) presentation. There are some unique sights, like floating Matryoshka dolls full of guns that appear at one point, or Kirill’s occasional bouts of superhuman powers. But if you were to put a gun to the heads of most audience members and ask why those visuals are in the movie at all and what the context surrounding them is, they’d likely draw a blank.

A Rough Draft is one of those movies that feels like something you dreamt — a bizarre collection of ideas and visuals strung together with little to no logic that makes you sound like a crazy person when you try and describe it in anything but the broadest terms. There are some interesting ideas here, but they’re implemented in the most clumsy, half-baked way possible. So at the very least, it has a pretty accurate title.

‘Mission: Impossible – Rogue Nation’ and the Mystery of Opera

Fantasia 2018: ‘Puppet Master: The Littlest Reich’ is a Mean and Gory Kill Compilation