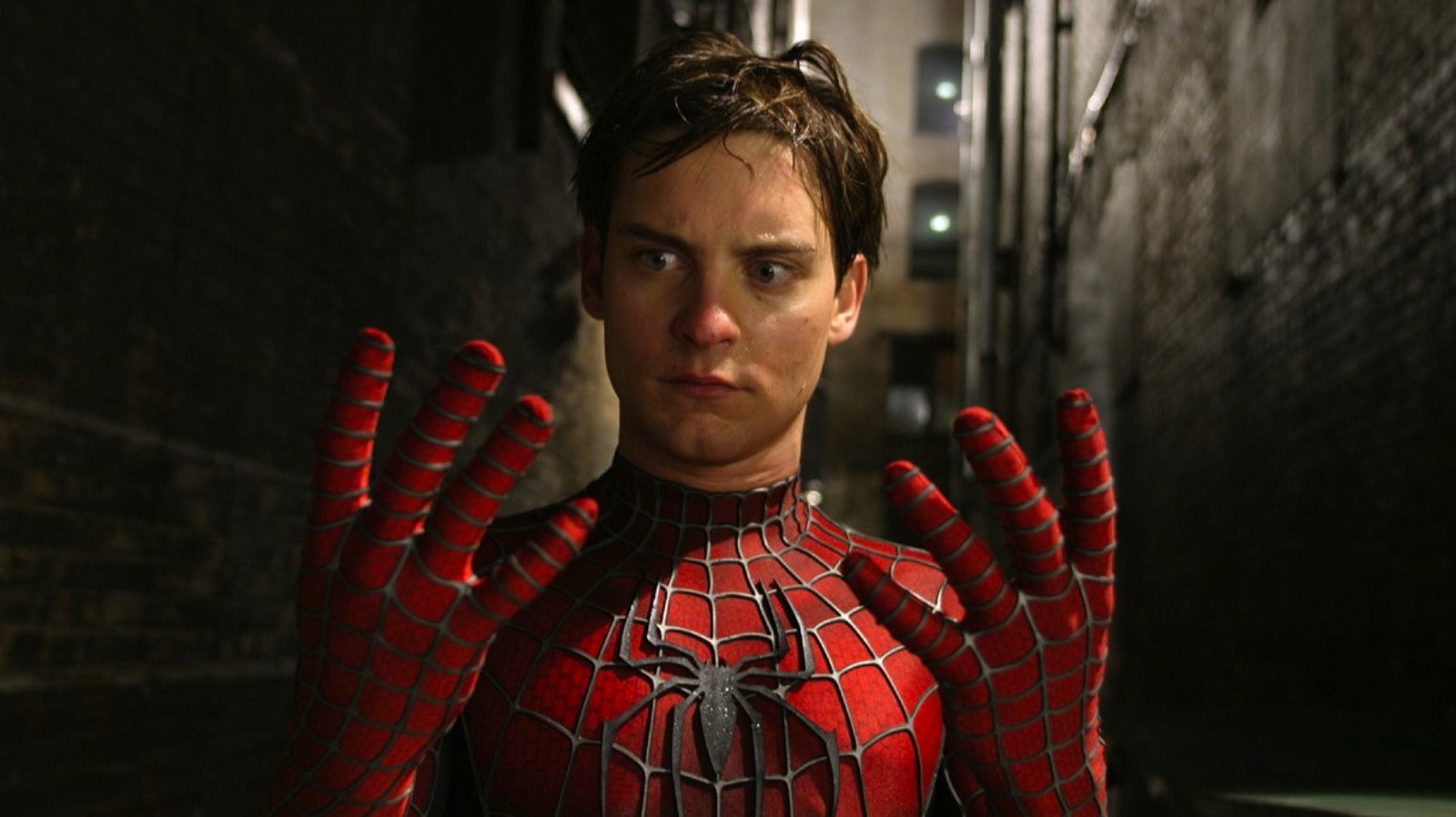 Tobey Maguire portrays a thunderstruck Peter Parker Spider-Man 2; he staggers through the film perpetually on the edge of tears, a hero in crisis, never more so than when he sulks in his squalid apartment, pining for Mary Jane (Kirstin Dunst) and resenting the heroic obligation obstructing his happiness: why shouldn’t he be happy? He didn’t ask for any of this. That question is essentially the crux of the film, and it interestingly wrinkles a classic childhood hypothetical – “what superpower would you choose” becomes “would you choose one at all?”

Still, as the lyrics of Jet’s “Hold On” spill out over images of Peter in his apartment (you tried so hard to be someone / that you forgot who you are / you tried to fill the emptiness / ‘til all you had spilled over) it’s hard to resist cringing at the earnest precision of the music, at Peter’s teen angst, at the mid-aughts of it all. Viewed through the prism of Marvel Studios’ current cinematic aesthetic – technicolor, winking, antiseptic, safe – Spider-Man 2 feels like a predecessor, a relic even.

Yet the film remains impossible to dismiss, largely because of Sam Raimi’s direction, and importantly, because those embarrassing vestiges of MTV culture (Dashboard Confessional with the credits song in a tent pole superhero release?) pin the film to a distinct era – before the Marvel Cinematic Universe, before Andrew Garfield, before Tom Holland, before the ascension of the Superhero industrial complex – when a movie’s failures and successes were unrelated to the narrative constrictions and the public perception of a larger cinematic narrative. Unlike Spider-Man: Homecoming, the most recent big-screen iteration of the character, Spider-Man 2 wasn’t assessed with respect to a recent slew of tangentially related, self-serious blockbusters. Raimi’s direction wasn’t constrained by the brand-specific style that has required each Marvel film since 2008 to look, behave, and sound like Iron Man. 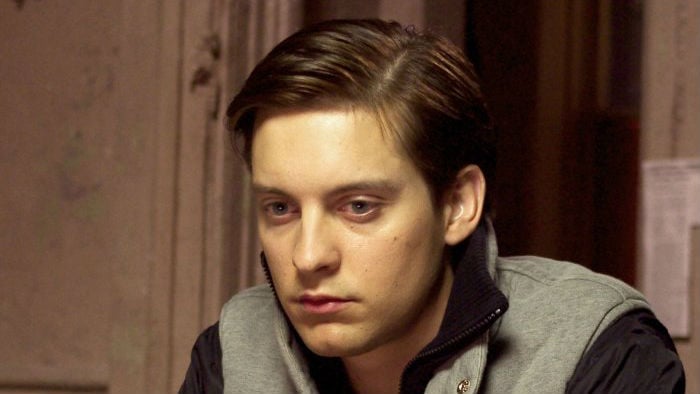 It’s worth examining Raimi’s film in contrast to the string of comic book adaptations released since Iron Man, but the merits of Spider-Man 2 outstretch its independence from the modern superhero ecosystem: with its auteurist directorial style, the poignant love story at its center, and its engrossing portrayal of a reluctant hero, Spider-Man 2 is a masterful treatment of comic lore, and a superlative example of the potential of standalone superhero cinema. With Spider-Man 2, the director drenches the 1950 “Spider-Man No More!” arc in a genre cocktail, using horror, camp, romance, and comedy to adapt the story of a disheartened Peter Parker unsuccessfully attempting to ditch his alter ego.

The introduction of the film’s villain, Doc Ock (Alfred Molina), is pure (but bloodless) Raimi horror. Ock’s mechanical arms lash out like the tentacles of a B-movie monster, efficiently dispatching a group of doctors who die with their faces contorted in masks of terror. As the camera whirls through the carnage, following each of his lethal claws to their targets, the scene assumes the unmistakable look of a classic slasher film. Doctors are pulled across the floor, their nails digging shallow trenches into it; other deaths unfold as macabre shadow theater, with silhouettes splayed against the operating room wall.

In other scenes, the director employs a diametrically opposite tone, embracing the absurdity of the superhero genre. A skirmish between Spider-Man and Ock on the side of a skyscraper, which Raimi frames from above for an extra punch of vertiginous suspense, is punctuated with a moment of lighthearted serendipity when Aunt Mae, thrown skyward by the villain, saves herself by accidentally grabbing a gargoyle with her cane. In a later sequence, Peter rescues a young girl from a fire. After finding her, the floor gives out, and Peter is himself saved from certain death when the child – all of 6 years old – helps pull him up in a moment of heartwarming illogic. 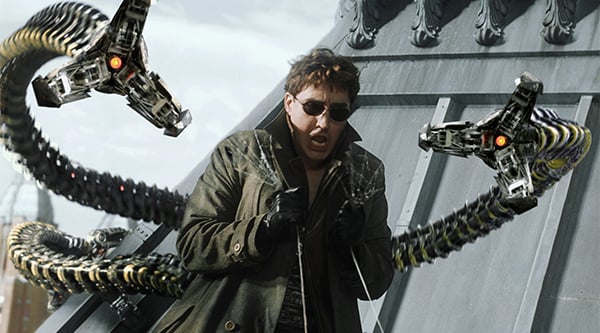 Self-aware comic-book silliness is also coupled in Spider-Man 2 with the same quippy humor and sight gags employed in post-Iron Man Marvel films. When Peter is fired from his pizza delivery job after perpetual tardiness, his boss (Aasif Mandvi) rips the joint’s sticker from Peter’s bike helmet, a funny bit re-imagining Peter as a renegade cop made to turn in his badge. As Doc Ock robs a bank, spilling gold coins everywhere, the bank’s Manager (Joel McHale) tries stealing one before Aunt Mae, ever the moralist, composes herself just enough to slap it from his hand. Humor in the film turns meta later, when Aunt Mae tells Peter she threw away his comics – that junk was just collecting dust, anyway. The jab is worth a chuckle now, but in 2004 it astutely referenced the position of Spider-Man (and X-Men, and Nolan’s Batman Begins) at the vanguard of a superhero assault on Hollywood.

Raimi’s genre mastery works to blend levity with a gravity without relying solely on scares, or the bludgeoning darkness that permeates the comic book adaptations of Zack Snyder and Christopher Nolan. The conflict in Spider-Man 2 doesn’t rise to the level of aliens pouring from the heavens or ominous beams shooting skyward – earth, as a whole, is safe. Still, the events of the film feel momentous because of the way Raimi treats the film’s hero. Spider-Man is placed on a literal pedestal in the film, positioned atop the cities highest skyscrapers, far removed from the elevated trains and three-story walkups of his Queens origins. He swings from the tops of skyscrapers in impressive parabolic arcs that the camera mirrors in long shots that lend a sense of unstoppable inertia to his motion. His movement appears limitless, except when his spinnerets run dry, a physical symptom of his wavering commitment to the suit.

Maguire’s Spider-Man is a savior figure, swooping from on high through narrow alleys and dangerous traffic, toward the numerous dangers he senses from his perch atop the city. He is reactive, quickly and capably using his webs with a variety of techniques the film doesn’t stop to explain, and doesn’t need to. His abilities aren’t fodder for guardians of canon to quibble over, but signals used by Raimi to communicate what the film’s plot doesn’t necessarily: this Spider-Man is a formidable superhero, and Doc Ock, thusly, is a formidable foe. 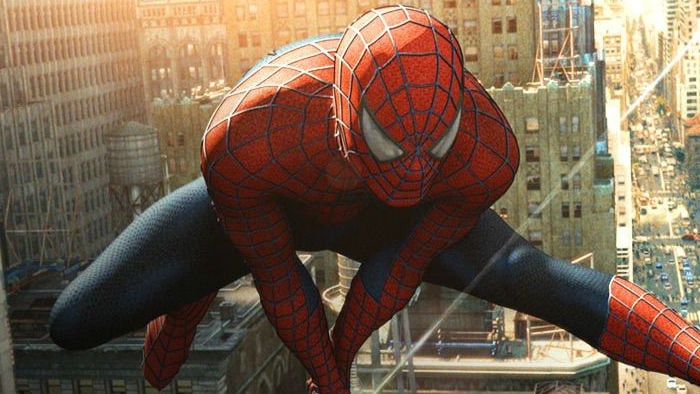 Outside of his suit, Tobey Maguire plays Peter Parker with an overwhelming fragility, as though the next indignity – a rejection from Mary Jane, or a rebuke from Harry Osborne – may break him forever. It’s less a nuanced take on the character than a direct steer into the particular identity crisis at the center of the film: Peter may not be able to coexist with Spider-Man, in any meaningful way at least. This internal conflict projects into the film’s love story, with Peter begrudgingly resisting the advances of Mary Jane, unwilling to risk her safety by acquiescing to her (and his own) romantic feelings. Unable to sustain his most cherished relationship, Peter feels his identity disappearing, as if being consumed by his heroic alter-ego.

Raimi gives the romantic storyline ample screen time, never allowing the tension between MJ and Peter to disappear behind the film’s superhero conflict. All of Peter’s crime-stopping early in the film exacts a toll on his relationship with MJ, in the form of missed dates and withheld emotion. As the film approaches a conclusion, she abandons the prospect of being with Peter – essentially abandons Peter himself. When she is saved by Spider-Man and ultimately discovers that Peter is behind the mask, the tension the film painstaking built is released, injecting an otherwise straightforward superhero film climax with an emotional wallop.

Raimi’s inspired direction, Peter’s interior drama, the romantic core of the film, the presence of a truly menacing villain – all of it coheres to capture the spirit of the Spider-Man character, and to tell a story that feels weighty without relying on an incoming apocalypse for stakes. Spider-Man 2 isn’t perfect; characters deliver awkward soliloquies, announcing their feelings and intentions to vacant rooms, and the film’s portrayal of Peter could add a layer of self-awareness, as the character tends to interpret even the pain he causes others as another facet of his own victimhood. It is flawed, but Spider-Man 2 succeeds in bringing a superhero character to life as more than one part of a greater whole, telling a story that can stand alone.

As for Spider-Man: Homecoming, Tom Holland’s version of the webslinger is definitely charming. His is a DIY hero discovering the range of his powers in Queens, low to the ground (as Tony Stark puts it in the film). But Homecoming quickly strips Peter Parker of his lo-fi appeal by attaching him to Stark, and by proxy, the Avengers storyline. Much has been made of the reboot’s treatment of Spider-Man as a high-school kid with high-school problems (look, he wears a backpack!), but the film itself has very little interest in exploring those problems, and instead portrays Peter as a striver, ready until the very end to abandon his youth and join the major leagues. 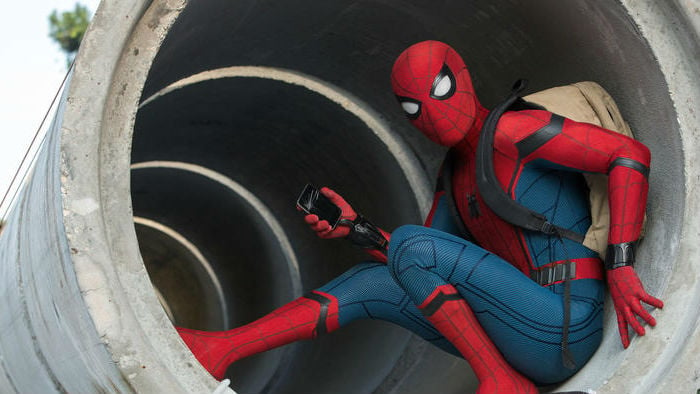 When Peter does realize at the film’s conclusion that he is better off as student than Avenger, the epiphany feels rushed, unearned, and inconsequential – partly because he spends the duration of Homecoming chasing Tony Stark’s favor, but mostly because the audience (thanks to the extra-textual visibility of Marvel Studios’ business plan) is forced to add an ellipse to Peter’s realization: he’ll hang out in high school, for now… Avengers: Infinity War is right around the corner, though.

Like Maguire’s Peter Parker, Holland’s take is aspirational and empathetic: he clumsily crushes on a senior girl and navigates the daily indignities of pubescent social life. However, thanks to the looming presence of Stark, Peter Parker’s problems in Homecoming never feel critical. How could they, when the film treats them from its first moment as a precursor to later appearances, and later installments? Spider-Man: Homecoming differs from Spider-Man 2 in this dependence on – and fealty to – a larger narrative. Raimi’s film was an interpretation that focused squarely on the character of Peter, intent solely on telling one story. It’s blend of tone, imaginative action (that skyscraper sequence could stand with any subsequent Superhero set piece), and genuine interest in character distinguish Spider-Man 2 from Spider-Man: Homecoming and the other Marvel Cinematic Universe films.

As Marvel’s Spider-Man reboot continues to beat up the box-office and receive its welcome as a conquering diversion, here to reintroduce fun and inconsequence to the already bright and breezy Marvel landscape, Spider-Man 2 exists as a reminder that audience investment and fun aren’t mutually exclusive, that significance is not always a byproduct of the bleak. It is ultimately breezy fare that manages weightiness, an earnest adaptation that winks at the silliness of its endeavor without succumbing to cynicism. Even after the release of Spider-Man: Homecoming, it remains the defining Spider-Man film adaptation, and one of the standard bearers of the superhero genre.