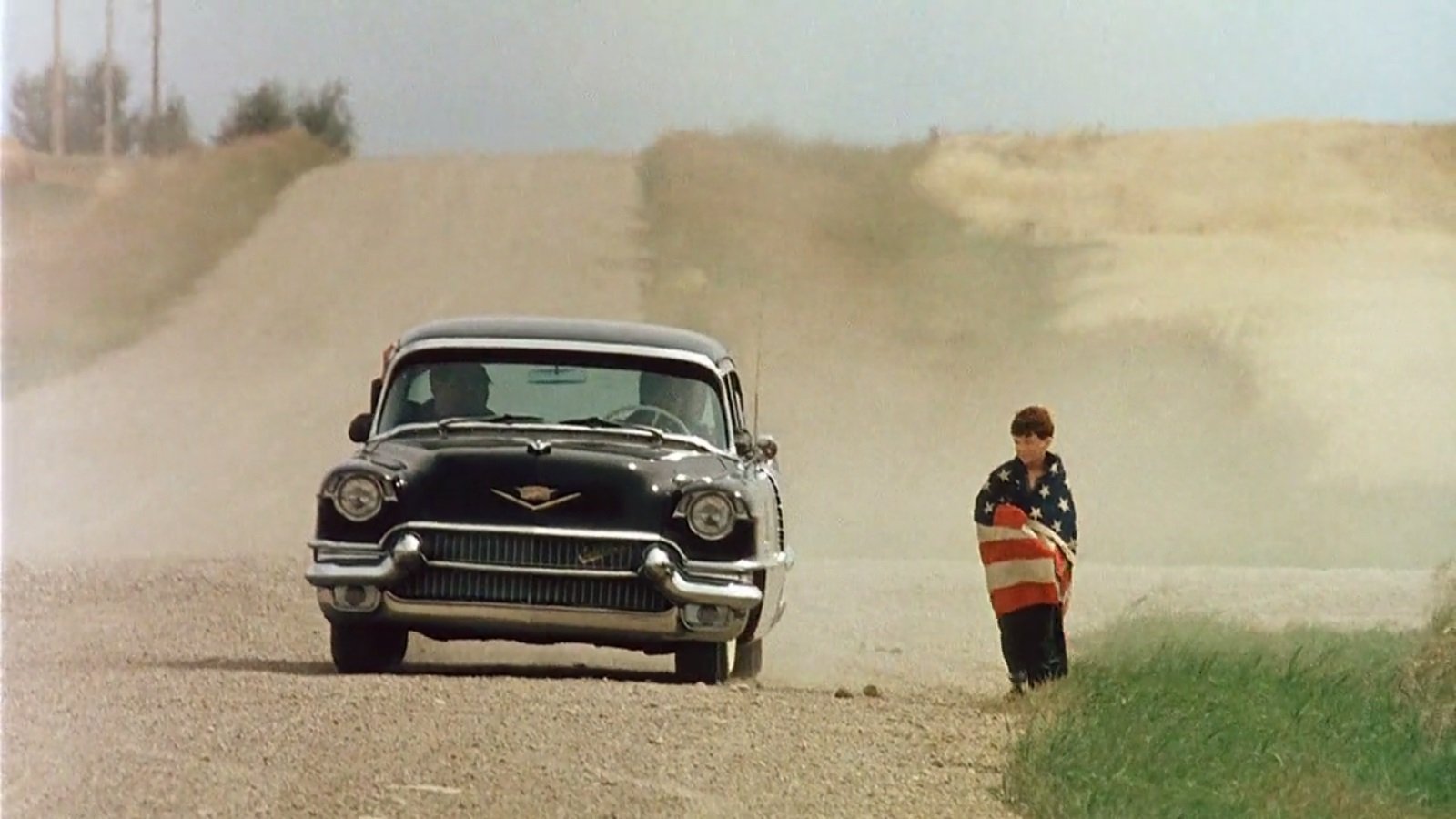 The Reflecting Skin is not your average vampire movie. I’m not even sure if it is a vampire movie, nor am I sure the movie knows what it wants to be. Although most people easily label it a psychological horror film, The Reflecting Skin is not a film that is easily pigeonholed. It appears to be a film about the trauma of growing up and more importantly, growing up with a dysfunctional family that is haunted by their past. And it’s all told in a series of twisted events.

This independent feature was the directorial debut of Philip Ridley, a British painter-illustrator-novelist who had supplied the script to Peter Medek’s mesmerizing 1990 gangster film The Krays. The Reflecting Skin was celebrated as one of the unique films of its year and received a good deal of favorable reviews. Set in grassroots America of the 1950s, Ridley’s script revolves around Seth Dove (Jeremy Cooper), an eight-year-old growing up in the 50’s on the Idaho prairie. Seth’s mother, Ruth (Sheila Moore), is an unhappy battle-ax who obsessively cleans her home, trying to get rid of the smell of petrol which Seth’s father (Duncan Fraser) carries with him when working at a small gas station nearby. Ruth doesn’t think much of her youngest son but speaks highly of her oldest Cameron (A pre-fame Viggo Mortensen), a soldier back from his military duty in the Pacific. Dad, on the other hand, is a loving father, who, unfortunately, has a shameful dark secret. At one point, he tells Seth a story about vampires and the prairie boy becomes convinced that a pale, young widowed neighbor named Dolphin Blue (Lindsay Duncan), is, in fact, a bloodsucking fiend. Seth’s slow break into madness is intensified by some truly horrific events that unfold shortly after. For Seth, the world of childhood is dark and twisted: His friends are molested and murdered, his tormented father douses himself in gasoline and then sets himself on fire before his eyes and his half-crazy mother abuses him. Meanwhile, his beloved brother returning from World War II is suffering from radiation sickness and doesn’t know it.

Described as a “child’s nightmare imagination,” The Reflecting Skin is clearly not your typical childhood memoir. Part horror story, and part coming of age tale – The Reflecting Skin is a true American Gothic – shot from the point of view of the impressionable Seth and crammed with twisted religious symbolism. Ridley is said to have conceived The Reflecting Skin at a time in his life when he was reading Alice in Wonderland and studying the paintings by Andrew Wyeth. The influence of Lewis Carroll is evident with its hyper-imaginative child roaming about what appears to be a dark fairy tale; meanwhile, Wyeth is even more apparent with the overall aesthetic. The Reflecting Skin is many things, and one of the most beautiful and most intriguing films of the 1990’s thanks to the stunning cinematography from the legendary Dick Pope. The breathtakingly blue skies, majestic shots of golden wheat fields and beautiful landscapes are a strong contrast to the universally bleak story.

Strangely, my biggest takeaway when watching the new restoration of the film wasn’t Pope’s gorgeous photography. I was instead floored by how each of the five main characters are painstakingly detailed and drawn – from learning about Dolphin’s husband’s suicide, and her ongoing fascination with destruction – to understanding why Seth’s mother is clearly unbalanced, and likely clinically depressed – to the father’s secret past – and to hints that Cameron is psychologically and physically scarred from his time spent overseas (in one of the most memorable scenes, he denies being a hero and abandons the American flag on the side of the dirt road). A few of the minor characters do fit into quirky, stereotypes and Robert Koons’ Sheriff Ticker is afforded a ridiculous backstory, but for the most part, the cast does a decent job in making these characters feel like real people.

The Reflecting Skin is often compared to the work of David Lynch. The VHS even quotes Roger Ebert saying he likes The Reflecting Skin better than Lynch. I suppose the comparison was inevitable since “Lynchian” became a common way for critics at the time, to describe any movie that they felt was weird. But truthfully, Ridley’s film has very little in common with the work of Lynch. Ridley’s sense of humor, for example, is far less chichi than Lynch (I’m not even sure he has a funny bone), and his characters, far less flamboyant. If anything, The Reflecting Skin recalls the work of Terrence Malick and uses imagery in a carefully studied manner – take for instance the reoccurring motif of water and blood. Water is often used to symbolize life and death in films. Hitchcock for example, masterfully used water imagery throughout his career, sometimes, as by which characters are saved from death (The Thirty-Nine Steps) but far more often, as a way to indicate that a character is in grave danger (The Lodger, Frenzy, Rebecca, Strangers on a Train, Psycho). In The Reflecting Skin, young Seth treats water like poison consistently refusing to take a sip. At one point, his mother even forces the boy to drink a large amount of water as a form of punishment and later Seth discovers their water supply is contaminated by his friend’s dead body floating in their well. Seth’s unwillingness to drink water (something essential to humans and other lifeforms in order to survive), is like Seth rejecting life itself.

The title of the film is taken from a scene in which Cameron shows Seth a photo of a Japanese baby whose skin has turned silver due to the after-effects of “the bomb”. Unsurprisingly, skin is also a reoccurring motif in the film. At the start of the pic, the children take note of the toughness of a frog’s skin, and Dolphin, who claims to not have a reflection (another link to vampire lore), is obsessed with keeping her skin young and wrinkle free. “It’s all so horrible you know, the nightmare of childhood, “ Dolphin tells Seth. “And it only gets worse. One day you’ll wake up, and you’ll be past it. Your beautiful skin will wrinkle and shrivel up, you’ll lose your hair, your sight, your memory. Your blood will thicken, teeth turn yellow and loose. You will start to stink and fart and all your friends will be dead. You’ll succumb to arthritis, angina, senile dementia, you’ll piss yourself, shit yourself, drool at the mouth. Just pray that when this happens you’ve got someone to love you because if you’re loved you’ll still be young”.

Perhaps The Reflecting Skin simply represents the dichotomy between good and evil, or maybe the film sees life as nothing more than a slow, painful death. Death is visible everywhere, from the dead bodies piling up, to the black Cadillac that roams the countryside abducting the young boys, a rather obvious, symbol of death as well. Cameron asks Seth,” Why aren’t you off playing with your friends?” To which Seth responds quite matter-of-factly, “All my friends are dead.”

The film seems relentlessly pessimistic and offers absolutely no hope or any sort of happiness for Seth and his family. Ridley fills each frame with metaphors that boil just below the surface, but what it all means is left for the viewer to decide. In the final reel, Seth is seen running as fast as he can through the golden fields. It soon becomes evident that no matter how fast he runs, Seth has nowhere to go. You can’t escape death, and in the end, we are all just rotting away. And in the end, Dolphin, who is seen almost always wearing black is found dead, cloaked in white – as if, dying was the release she needed to break free from the horrors of her everyday existence. Perhaps The Reflecting Skin argues that we are all vampires, sucking the life out from one another, day to day.

Leap of Faith: William Friedkin on The Exorcist Shows Us How Making Films is an Act of Faith

The Krays – everything a fan could want in a gangster flick