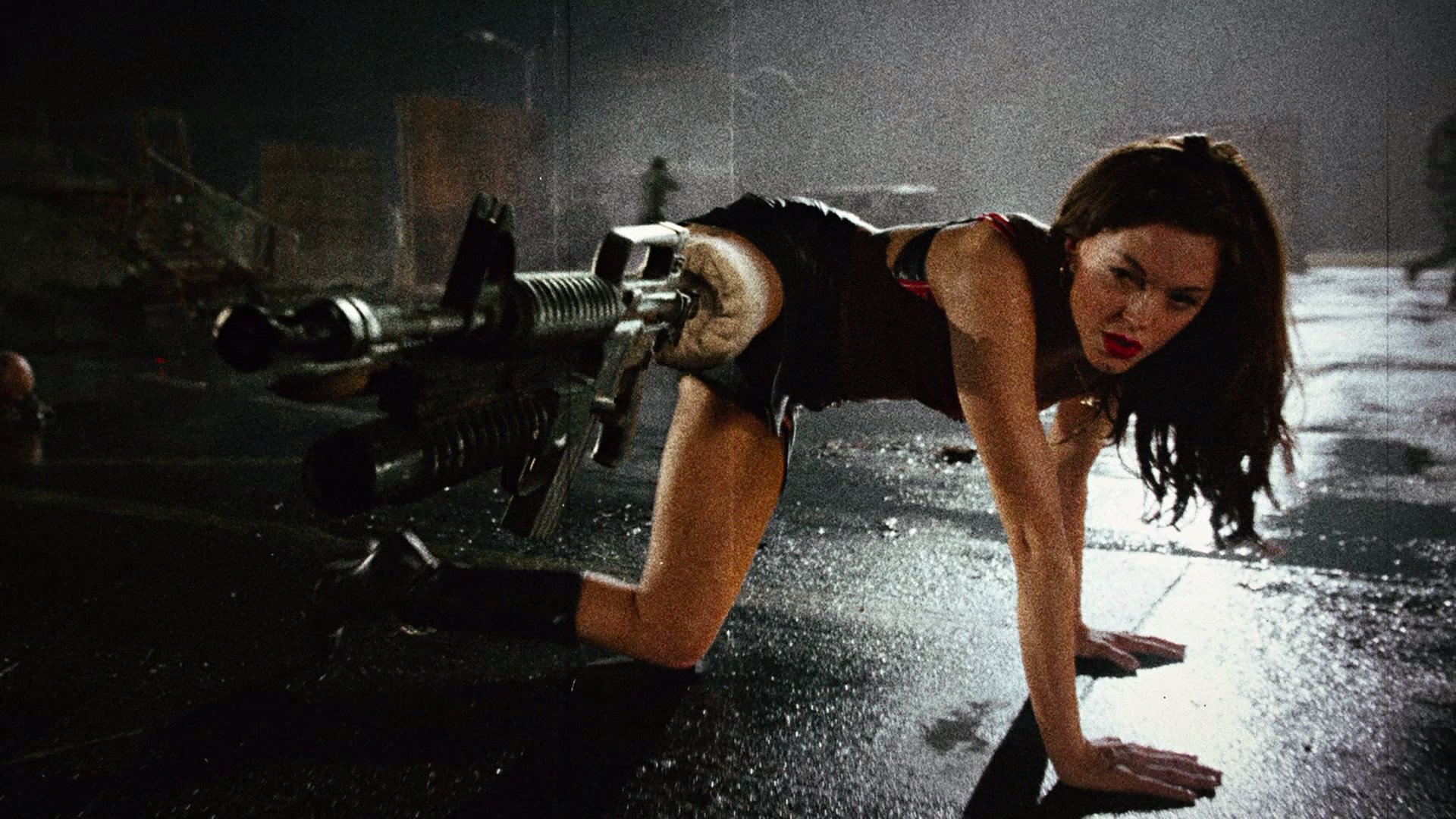 Unbeknownst to the denizens of a small southern American town, a horrible outbreak is about to be unleashed. Rogue scientist Abby (Naveen Andrews) is on the verge of making a deal to exchange a volatile toxin with a paramilitary group led by Lieutenant Muldoon (Bruce Willis), but when the deal goes sour, Abby makes the foolish decision of causing the gas to escape. Across town, down on her luck, Cherry Darling (Rose McGowan) has just quit her job as a go-go dancer, aiming to switch careers from titillating men to making people laugh as a stand-up comedian. Alas, as her ex-boyfriend El Wray (Freddy Rodriguez) comments when they reacquaint themselves at a rundown BBQ restaurant, she isn’t funny. Pretty soon, however, Cherry, El Wray and several other townsfolk, among them Dr. William Block and wife Dr. Dakota Block (Josh Brolin and Marley Shelton), sheriff Hague (Michael Biehn) and his barbecue chef brother J.T. (Jeff Fahey), have a lot more to worry about as the infected turn into mindless zombies and take over!

April 2007 saw the theatrical release of a project unheard of since the drive-in movie-going days of yore: a grindhouse double-billing of horror-action films. The event itself was intriguing to say the least, certainly for horror hounds, as both writer-directors Robert Rodriguez and Quentin Tarantino made their own films and had guest directors produce trailers for non-existent b-movies that would play before and between the two feature presentations. The resulting Grindhouse proved a critical success for the most part, but an absolute box office dud. Whereas critics and connoisseurs were mostly receptive to the endeavor, the general movie-going public seemingly didn’t care one iota for the odd mélange that harkened back to a bygone era of horror flicks.

The intermittent years have given those that missed the original release the opportunity to discover it on their own time and terms. In fact, one need not watch both films and all the trailers in a single sitting. Should they choose to, both Rodriguez’s Planet Terror and Tarantino’s Death Proof are readily available separately. Whereas Tarantino’s effort is, unsurprisingly, the more slowly paced, methodical of the two ventures, Rodriguez takes a more action-heavy, gory route, and as such satisfies two crowds at once: those salivating for more effects-driven horror and some insane violence. With a series of digitally added scratches and pops (and even a ‘missing reel’), Rodriguez, a director with very genre-heavy proclivities, indulges with a film that straddles the line between paying homage to the grindhouse era as well as winking at itself.

As an overall movie, Planet Terror is a respectable effort, although it does fall prey to a practice too many films of the modern era engage in. In a nutshell, the film has no reason for being 1 hour and 47 minutes. Even though a lot of it is good, goofy fun, one cannot help but at times feel that the film could benefit from more judicious editing. Some scenes could have easily been left on the proverbial cutting room floor, most notably the sequence in which Rodriguez’s buddy Tarantino plays a rapist soldier trying to take advantage of poor Cherry, who at this stage has lost her right leg, replaced by a ridiculous wooden stick (that’s splintering, no less!). No self-respecting grindhouse-esque project really needs to last longer than 90 minutes. Their raison d’être back in the day was to make some easy bucks off unsuspecting patrons that thought they were perhaps in for some real treats. Usually, these movies barely managed to make due to the promises of their feeble marketing campaigns. Obviously, this being a modern, 2007 film, Rodriguez owes it to the audience to deliver the goods. The stand-alone cut of the film is a little bloated for its own good, with not every character feeling equally engaging. Josh Brolin’s Dr. Block, for instance, is never as amusing as say, his wife Dakota, played by Marley Shelton, or sheriff Hague, played by eternal fan-favourite Michael Biehn.

That criticism alone should hopefully not discourage anyone from taking a chance on Planet Terror. Occasional pacing issues aside, Rodriguez and company do in fact produce a regularly rousing spectacle of debauchery, gross-out humour, and over-the-top action sequences. As far as the laughs are concerned, one had better know what to expect when heading into Planet Terror. If the idea of a woman already drugged on anesthetics breaking her wrists as she tries to open her car front door tickles one’s funny bone, then they will feel right at home with most of what the movie has to offer. Better still, sometimes the brief, blink and miss them moments prove the most uproarious, such as when deputy Tolo (a very game Tom Savini) accidentally shoots an innocent person, mistaking them for a zombie. Sheriff Hague calls him out like a dumbass, to which Tolo quietly nods his head and says ‘Eh, yeah.’

One of the really enjoyable aspects to taking in Planet Terror is less the appearances of a big-name actor like Bruce Willis, who basically repeats the Willis-isms he has perfected for years now, and more the lively, if slightly lesser-known or even forgotten cast members. Freddy Rodriguez is not what one would call a household name, yet here he is playing the part of the quiet but lethal, loner hero that refuses to give in to his emotions, channelling his inner Clint Eastwood for all intents and purposes. Rose McGowan, at one time incredibly popular for her starring role on the television series Charmed, is a wannabe terrible comedian with a machine gun for a right leg, spending the entire film dressed as lightly as can be without actually being in the nude. They are but two of the actors present that normally don’t get roles in blockbuster-like spectacles, which, when one thinks about it for a moment, might explain why nobody went to see the movie back in 2007: there really aren’t many popular faces to recognize.

It should not come as a surprise that director Rodriguez excels at staging and executing really impressive action beats. This is the same man that gave audiences the El Mariachi trilogy and From Dusk Till Dawn. Planet Terror sports essentially those very similar skills, only with a slightly bigger budget and applied to a zombie apocalypse story. What really gets one’s adrenaline going is the variety of action on display. In what could have been an endless collection of scenes involving survivalists shooting zombies in the head, the movie chooses to create as many diverse situations for the heroes and heroines to blow up, mow down, and drive over their brain-dead nemeses. Even the scenes that mostly involve gunfire are elaborately staged and force the characters to get strategic about how they utilize their limited resources, such as when Cherry goes off to start a truck the gang will need to escape while El Wray picks off the monsters from afar with a sniper rifle. Another occurs shortly thereafter when the band of surviving members drive off in two different trucks, one motorcycle and one mini motorcycle as they shoot zombie heads off and in some cases simply roll over them, producing comically large splatter effects.

Of course, seeing Cherry finally quipped with the machine gun leg as advertised on the posters is the definite highlight of the movie. For so much of the film her character is at a crossroads in her life, unsure of herself or her sense of worth. Yes, several of the scenes that touch on those normally very serious topics are played for some comedic effect, but they still make Cherry a heroine worthy of the viewer’s empathy, however zany the circumstance may be. Thus, when she finally becomes the leader of the pack, guns blazing in a way never before seen in a movie, it’s completely satisfying. The effect itself looks great and the gadget is used to its full potential even though it is in the final 10 minutes. It is the cherry on the Sunday, no pun intended.

Planet Terror came and went without much of a stir back in 2007, as did its Grindhouse brethren Deathproof. It’s a shame given how it was a unique opportunity for people to catch a glimpse of what cheaply made horror movies were like only a few decades ago. Perhaps delving into the past is not something most modern pop culture consumers care for. As wonderful and as well-received as Tarantino’s films are, and they often harken back to older eras, it isn’t as though they open to the tune of 100$ million. Hindsight is always 20/20, and by now it is easy to see that Planet Terror is indeed a cool, worthy experiment.

45 years ago: Annie Hall was the Most Important Romantic Comedy in History

7 Days: A COVID Comedy That Almost Nails It