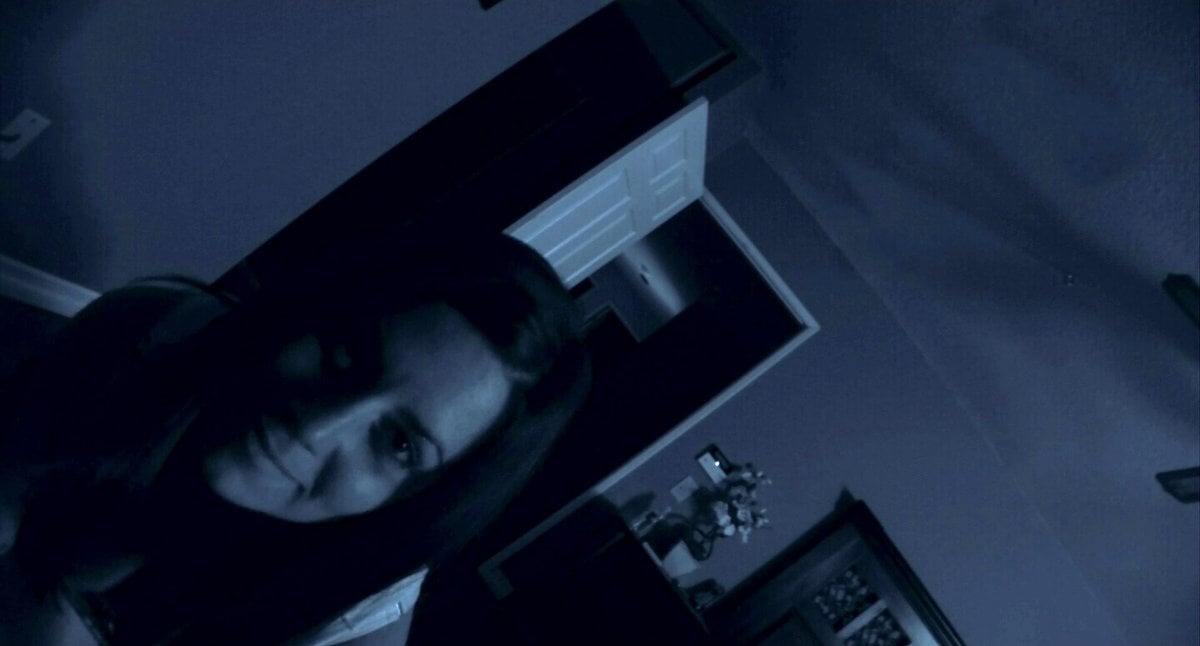 A young couple moves into their new home in a well-to-do neighborhood in San Diego. This would be the happy ending to most films, but unfortunately for Katie (Katie Featherston) and Micah (Micah Sloan) it is just the beginning of their troubles. Shortly after moving in bumps, whispers and general disturbances at night keep the couple awake at night. Rather than shrugging these odd occurrences off, Micah decides an investigation is in order. If this presence is active in the middle of the night as they sleep, then that is when Micah will record.

No opening or closing credits take place during Paranormal Activity. The film simply begins by thanking “the families of Micah Sloat and Katie Featherston,” passing itself off as evidence recovered from a crime scene. Further lending credibility to the concept is that no footage violates that Micah shot the film himself. Micah’s purchase of a several thousand dollar camera upsets Katie, but she puts up with it. After a paranormal researcher comes over to lend Katie and Micah a hand Katie reveals that she has had these things happen to her since she was a child. Katie isn’t looking to get reacquainted with these traumatic episodes from her childhood, but Micah is fascinated by this “boogeyman”.

Frustrations between the previously happy couple grow harsher as Micah’s obsession with paranormal entities persists. It doesn’t seem like a coincidence that as the two argue more, the frequency of hauntings increases as well. One argument is punctuated by Katie asking Micah in dismay “did you actually go back to pick up your camera?” If you take away the terrors at night, then all you just have is a case of domestic bliss quickly becoming a destructive household.

What this picture gets that a lot of frenetically cut gore-fests don’t is that there is a lot of power in waiting. No foreboding music is necessary, all we just need is the growing sense of dread as each minute ticks closer to the bewitching hour. Any deceptive special effects are difficult to find, more importantly, they aren’t as effective.

As evidenced by The Blair Witch Project, less is absolutely more. Katie and Micah are haunted by a demon we only hear, but never see. The sound design behind Paranormal Activity is what gets viewers jumping. You’ll be tempted to cover your eyes as the haunting gets worse, but it’s your ears that are doing the frightening. At first, the marketing campaign based around audience reaction videos seemed like a ploy, but the simple scares (powder and bedsheets) prove the most memorable.

Paranormal Activity serves as a reminder of the communal viewing that can elevate watching movies into an experience. There is just something about a group of people sitting on the edge of their seats in baited breath. Horror films are notorious for playing better in crowds and this film is no different. It’s a slow build-up of dread and makes the anticipation more frightening because things can only get worse as each night passes.

Don’t be surprised if friends linger their hand just above the popcorn in case a scare should happen before they grab a handful.

Ninjababy is an Honest Pregnancy Comedy from Norway