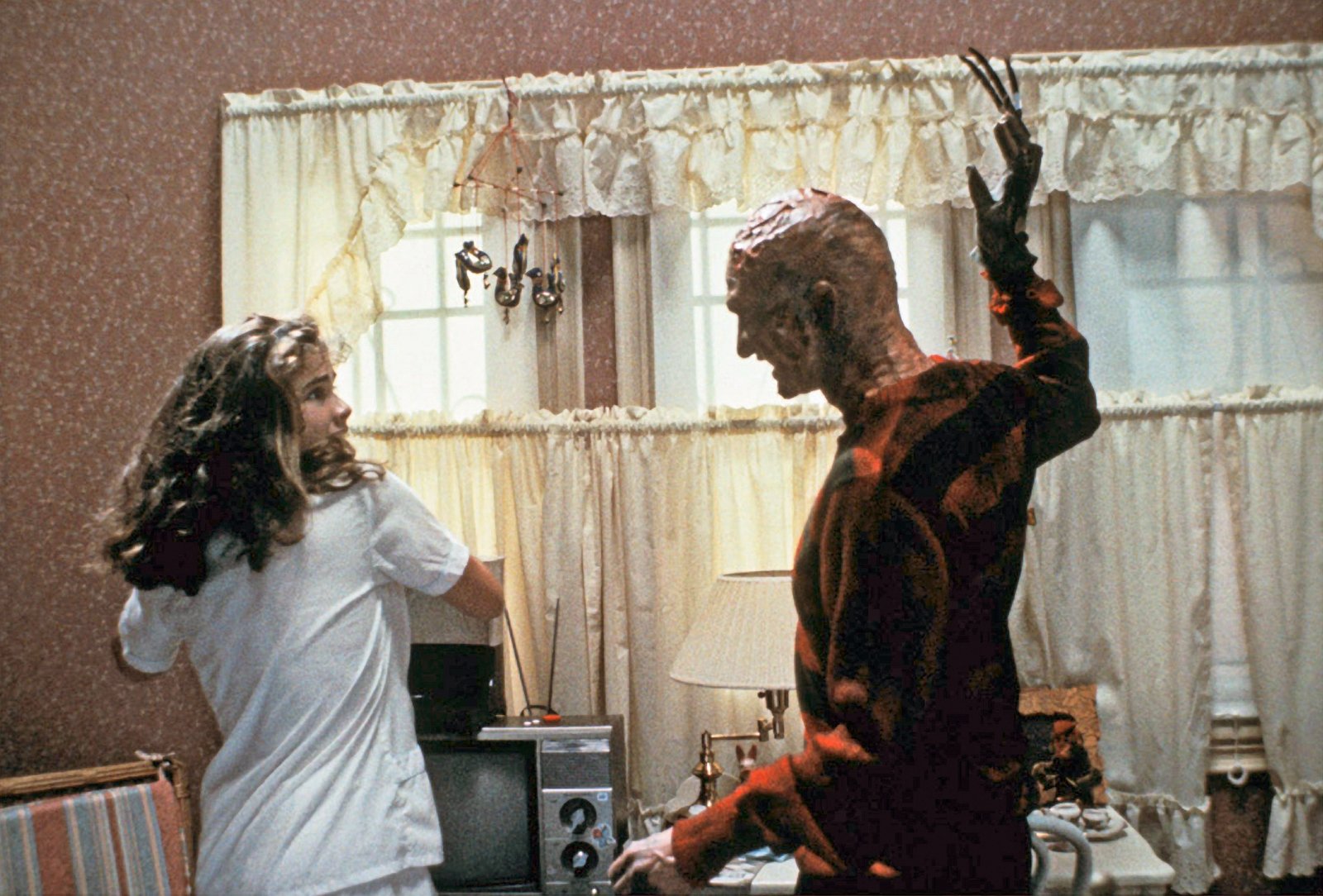 It’s hard to believe that Wes Craven’s A Nightmare on Elm Street is still relevant horror. Sure, it was a foundational film for its time and spawned a massive-yet-under-performing franchise, but modern horror is almost an entirely different type of genre, and Craven’s nightmare can tend to feel a bit dated and powerless.

However, that doesn’t mean that A Nightmare on Elm Street isn’t important. At the time of its release, the entire slasher genre was slowly breathing its last, dying breath. Box office numbers were low, and studio interest was waning, primarily because of market saturation and media hysteria.

On the surface, Craven’s film seems like an average, schlocky horror flick. On sleepy Elm St., Boogeyman Freddy Krueger exacts his revenge on a group of young teenagers; by entering their dreams, the monster picks them off one-by-one in a gruesome and suggestive fashion.

But there’s so much more to it than “bad guy chops up kiddies in their dreams.” Many years down the line, A Nightmare on Elm Street is still an important piece of cinema that opened doors for personality-driven slashers like Child’s Play and Scream. In doing so, Craven’s vision blends genres to bring new life to the psychological horror genre of the 80s.

It’s no secret that A Nightmare on Elm Street is absolutely oozing sexual transgression, but it does so in interesting ways. Like many slasher films of the era, it plays upon the societal fears of promiscuity amongst the youth and offers thrilling retribution for their actions. This is solidified very early in the film when Linda and Rod (the first to die) hook up during a sleepover and are punished by death at the hands of the dream killer.

But A Nightmare on Elm Street breaks from tradition to create something a little more frightening. Although Glen makes the mistake of advancing on Nancy, she turns him down. In fact, their relationship is a shining example of a caring and respectful teen couple. Contrary to the slasher formula, Glen is still brutally murdered by Freddy, even though he broke no boundaries, leaving Nancy alone as the chaste final girl.

It’s this fact that makes the film not about punishment for the transgressions of youth, but retribution for the actions of their parents. Sure, A Nightmare on Elm Street feels very slasher-esque and retains a lot of the genre’s hallmarks, but there are the darker elements of inherited sin and pedophilia that lurk underneath.

It’s this notion of the “something” the parents have “done” to their children that creates the film’s unique nightmarish quality. Either naïve, absent, or alcoholic, the parents open the door for a horror to steal the innocence of their youth.  That, combined with Freddy’s overt sexual advances on Nancy, make for the darkest piece of all.

Adding a dash of fantasy

A crucial development by A Nightmare on Elm Street is its blending of the fantasy and slasher genres. While previous horror films tended to keep the narrative grounded in reality, Craven’s work uses fantastical imagery to provide an otherworldly quality.

While there had always been slight supernatural elements to genre staples like Friday the 13th, A Nightmare on Elm Street uses dreams to open up new vistas for the genre and new dreamscapes to explore. This provided an entirely new playground for Craven to bend the laws of cinema and create interesting twists that keep audiences guessing.

In doing so, Craven places a much heavier focus on using a special effects team to create inventive uses of the set. While borrowing much of these images from sci-fi and fantasy films, the director still brings a greater usage of these stunts into a genre normally known for its portrayal of stark reality.

A little humor in horror

A Nightmare on Elm Street is also notable for its interesting use of comedy to punctuate the darker subject elements. Although not an overtly funny film, the sinister playfulness of Freddy’s character comes across as almost slapstick at times. While probably not intentional, it’s the cat-and-mouse game that Freddy plays with Nancy that is disgustingly humorous, and Englund’s movements and facial expressions somehow blend horror and farce together to disorient the audience.

It honestly feels like Craven may have taken some inspiration from a film that makes a brief cameo in A Nightmare on Elm Street: The Evil Dead. While not intentionally funny, Raimi’s low-budget work married humor and the grotesque in interesting ways, and Campbell’s portrayal of Ash borrowed much from his comedic background.

It’s this new personality-infused villain that offered such a breath of fresh air to the genre at the time. By making Freddy a fleshed-out personality instead of a silent, hulking behemoth, Craven reached the psyche of the audience in new ways. This personality-driven horror eventually became an important part of the genre in the late 80s, opening new avenues for writers to expand the slasher concept with characters like Chucky and Pennywise.

Future of the franchise

Unfortunately for Freddy’s personality, later entries into the Nightmare on Elm Street franchise have transformed his character from a cold-blooded killer into a murderous jester, offering goofy one-liners and wisecracks while butchering teenagers in ridiculous ways. It all started when Craven lost control of his character by turning down a sequel, and the horror icon began spiraling down from a nightmarish villain into a parody of the genre itself.

It’s interesting how the later films in the franchise actually make the original A Nightmare on Elm Street feel more comedic than intended. There is an almost diluting factor to Freddy’s character that has happened over time that makes him seem less like the stuff of nightmares and more like a Scary Movie stand-in.

That being said, the 2019 franchise reboot does a spectacular job of blending these two realms together, making Freddy back into a frightening force that occasionally still drops a horrifying one-liner here and there. By replacing Englund and taking a new direction, the film offers a glimpse of the gritty, realistic horror that the franchise still has the capacity to offer. Although Freddy might take breaks from stalking teens, the time is always ripe for another Nightmare on Elm Street film. There are still plenty of dark dreams on the horizon.

Scream 4 is Bloodier, Smarter, and Scarier Than We Remember