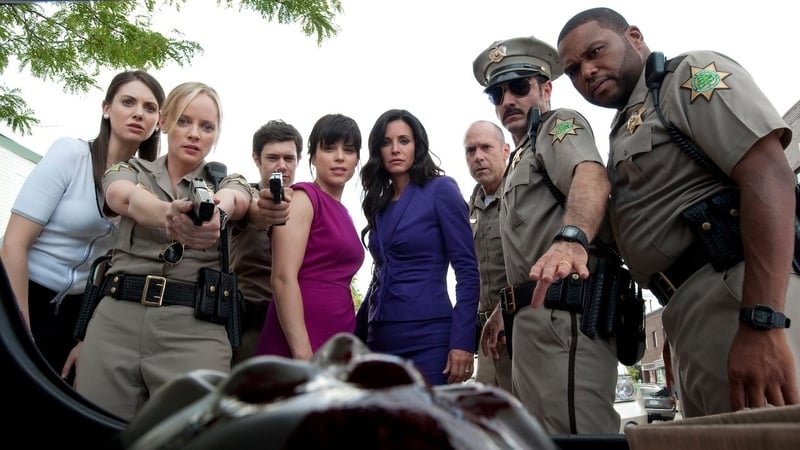 This isn’t a comedy, this is a horror movie. People live, People die, people run, but more importantly people scream in Wes Craven’s fourth installment. In horror’s most self-reflexive and in some ways most successful horror franchise, Scream 4 is bloodier, smarter, better and just plain scarier than all three before it. In an era of reboots and remakes, Scream 4 treats its fans with an entry as salient as the original. More importantly, Scream 4 obeys the number one rule: “Don’t fuck with the original.”

“You’re addressing a generation of young fans, but also a generation that has gone with you for three, as well as a decade worth of other films. You have to be as good as, or better than those films.” – Wes Craven

Much like Scream, Scream 4 is a rarity and more than a simple winking nod to films from the past. The secret ingredient is effortlessly merging humour with genuine scares around a story taken seriously. Unlike most slasher films, characters are fleshed out, and you care who lives and dies, so the tension is high throughout, and the fate of the characters actually matters.

Scream 4 may not feature a scene that matches the masterfully conceived and terrifying stand-alone opening sequence featuring Drew Barrymore from the original, but what it does offer is one hundred and eleven minutes of nail-biting suspense. While the first entry spent too much time with characters cocking guns and spraying bullets, in what is supposed to be a slasher film, the fourth installment paints the screen red with gallons of blood. Scream 4 earns its R rating since the film’s many stabbings don’t cut away from showing the penetrating blade. It cuts and it cuts deep.

Wes Craven and writer Kevin Williamson worked hard to re-imagine familiar territory and do a superb job in bringing the franchise up to date. Scream 4 boasts a witty script, one that kills off the genre’s clichés with panache. And while it displays some of the same attributes present in its predecessors, the film’s references to social networking sites, it’s use of mobile phones, portable digital cameras, live internet feeds not only help in making it more current but for once these tools are used in intelligent and constructive ways to actually help move the story along. After all, the best horror films have always reflected the times in which they were made.

Scream 4 isn’t just a horror movie about horror movies, but a commentary on how they’ve changed since the first Scream was released. As the tagline reads, “New Decade, New Rules.” Sex doesn’t necessarily equal death; ‘I’ll be right back” can mean you most likely will return; the unexpected is the new cliché; everyone is expendable — including victim royalty — and running up the stairs might be your best option this time around.

Much like the original, the plot manages to cast suspicion on a barrage of characters and there are enough red herrings for five more movies. Craven reunites the lead trio (Neve Campbell, Courtney Cox, David Arquette), and introduces a new cast whose stellar efforts carry a critical role in securing the film’s success. Eric Knudsen and Rory Culkin star as the most technologically savvy of Scream’s teens; the duo rightfully replaces the much beloved and missed Jamie Kennedy as the prototypical film-geeks. Rounding out the rest of the teen cast is newcomer Marielle Jaffe, Lucy Hale, Shenae Grimes, Nico Tortorella, Alison Brie, Emma Roberts, and Hayden Panettiere. And that’s just the start: Adam Brody, Mary Shelton, and Anthony Anderson all play deputies and two-time Academy Award nominee Mary McDonnell stars as Aunt Kate. Of course, Scream 4 wouldn’t be proper without cameos so look out for Kristen Bell, Anna Paquin, and some ghosts from the past.

Kickstarting with a movie within a movie within a movie within a movie and so on, the film piles through a dozen set pieces, heavy doses of blood, and a sweaty workout of self-references. Once the frenzy of artifice and self-congratulatory winks are all said and done, the climax shifts into auto-drive relying on the basic genre tropes to unveil “the big reveal” that Ghostface is in fact … (insert your own speculation as to who the killer or killers are here). For some, the ending may disappoint, but in my opinion, it perfectly reflects the past ten years of the genre.

Scream was a box office success, grossing $173 million internationally but it actually only made $6.3-million over its opening weekend, a disappointing figure for a film whose budget hovered around $15 million. It was word of mouth that made Scream a cultural cinematic phenomenon, selling out theaters three weeks after its initial release. Scream arrived at the perfect moment. Slasher films were no longer commercially viable. The first film was released in a decade that offered some of the worst horror films ever made. Creativity was at an all-time low. Fans were sick of seeing the same story featuring a killer chasing down a group of good looking teens in either the suburbs or a cabin in the woods. Scream took those very ideas and twisted it in such a clever way that even though we were watching the very same slasher film we’d seen hundreds of times before, audiences didn’t care. Fans appreciated how the film commented on such a fixed genre while operating as a sharp example of what a slasher film is. And like Scream, Scream 4 also came at the right moment. With the sudden and unwelcome rise of torture porn in the ’00s, audiences were craving some good old-fashioned Craven.

For genre enthusiasts, Scream 4 is a hard left lead followed by a right cross, a horror movie that slices its way through expectations and, a sequel that takes a stab at altering the shape of horror films for another decade.

A Nightmare on Elm Street is an Important, Dark Dream

‘Jay and Silent Bob Reboot’ is One Long In-joke