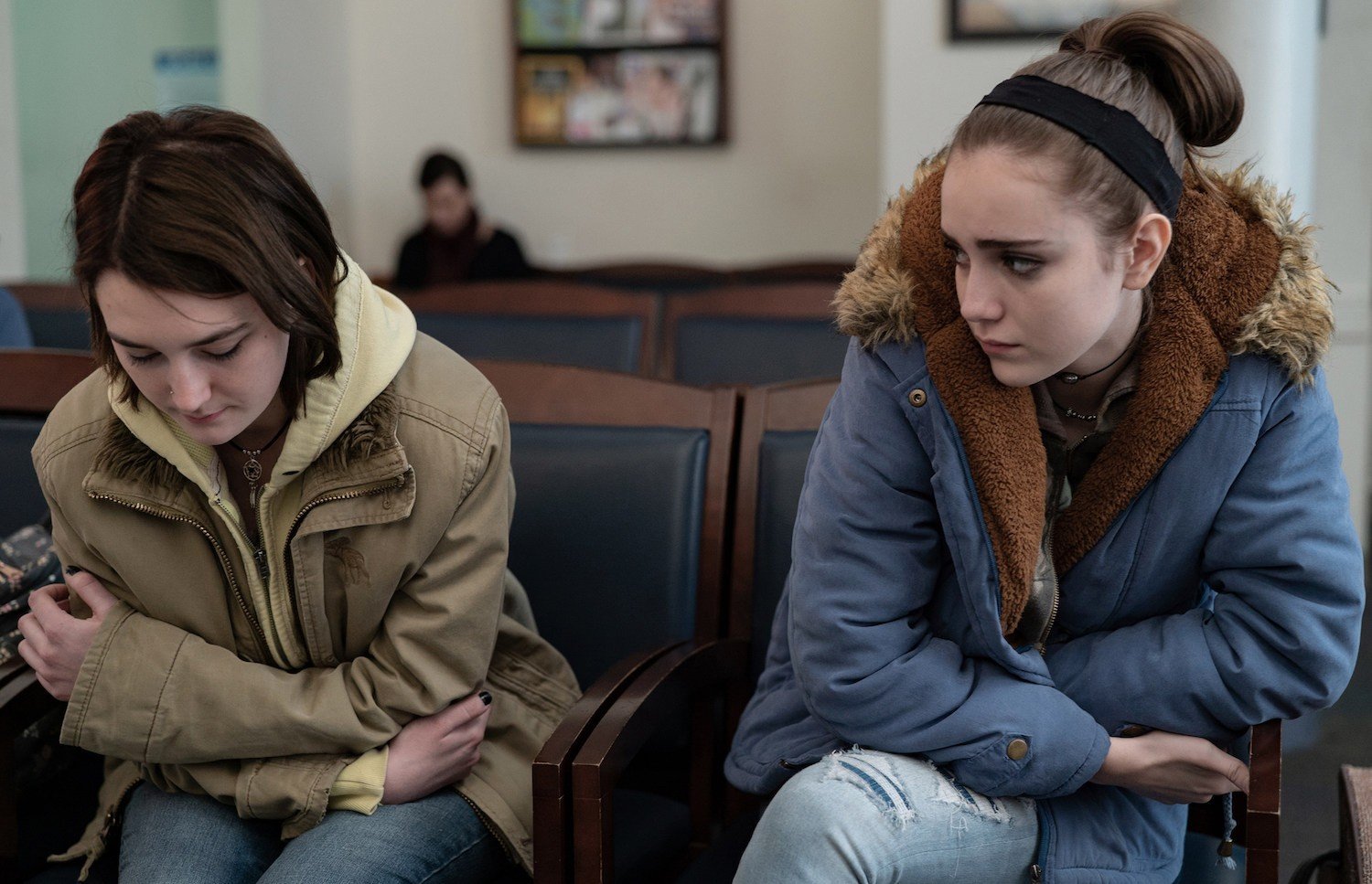 The early buzz out of Sundance was largely positive about Eliza Hittman’s third film, Never Rarely Sometimes Always, but some critics misjudged the work as a mostly political examination of hot button social issues. They’re not totally off the mark, as Hittman’s viewpoint is clear and undisguised, but her film is a sensitive and moving look at the experiences of young women in need of an abortion in the United States rather than a form of propaganda.

The film opens on a talent show with a parade of singing groups, but the pattern is disrupted when we first see Autumn (Sidney Flanigan). She’s singing an angsty rock song solo and accompanying herself on guitar. It immediately sets her apart from the crowd; the self-penned song betrays her inner anger at how she’s treated, and the fact that she’s the only person playing an instrument suggests she’s resourceful and adaptable. The fact that she’s even willing to sing sometime that departs so extremely from the poppy nature of the other acts indicates how desperate she is to break out of the social constraints that bind her.

Never Rarely Sometimes Always indicates the position Autumn is in early, when a boy in the audience calls her a slut in the middle of her performance, temporarily derailing the song, though she’s able to resume and finish it. Hittman doesn’t give anything in the way of backstory, but it’s clear from the outburst and the shifty way other guys look at her after the talent show that she’s being shamed for some kind of sexual encounter. The consequences of said encounter are also clear when Autumn skips school one day to go to a clinic for a pregnancy test, which turns out to be positive. Though she doesn’t realize it, the place she has gone for the test is a “crisis pregnancy center,” an organization that seeks to dissuade women from getting abortions, often through disinformation. Autumn is 17 and still in high school, and she knows she can’t take care of a baby or even bring one to term without sacrificing her future, so she looks up how to obtain an abortion. That’s where things get complicated. She’s 17, and minors in Pennsylvania can’t get an abortion without parental consent, something she might not get. So she skips out on school and work shortly afterward to take a bus to New York with her cousin Skylar (Talia Ryder) in search of one.

That might seem like the end of her journey, but Never Rarely Sometimes Always finds obstacle after obstacle that seemingly conspire to stop Autumn from getting an abortion, whether legal, financial, or social. Some viewers might find Autumn’s trials and tribulations to be a bit much, but that betrays their own disconnect from something that’s shockingly immediate to many women. After my screening of the film, Hittman revealed that much of Autumn’s experience navigating clinics and Planned Parenthoods was based on her own research long before filming began. She traveled to multiple different centers and played the part of a pregnant woman, or someone who thought she might be pregnant, in order to see how the different employees treated her, what options they offered, and in what ways they stymied her. One of the counselors that Hittman found particularly helpful and soothing even appears in the film in a marvelously empathetic role.

Hittman largely follows Robert Bresson’s precept that filmmakers should use non-professional actors in order to extract a life-like and spontaneous performance. With Flanigan, she’s found a miraculous newcomer, an actor so good that she makes it hard to believe she hasn’t been in movies before. Ryder is a more professional actor, but she also has a wonderful realness to her performance and incredible chemistry with Flanigan, so much so that I assumed she was also a non-professional (in the best way possible). Hittman could easily have made Never Rarely Sometimes Always as a documentary, but her lead actress are so good that they help make the story even more personal for viewers. Not everyone needs a way in, and plenty of women will have gone through exactly what Autumn does here, but it’s impossible not to be moved by her plight and the way she transcends it.

Impetigore Is a Pleasantly Bonkers Slice of Indonesian Horror