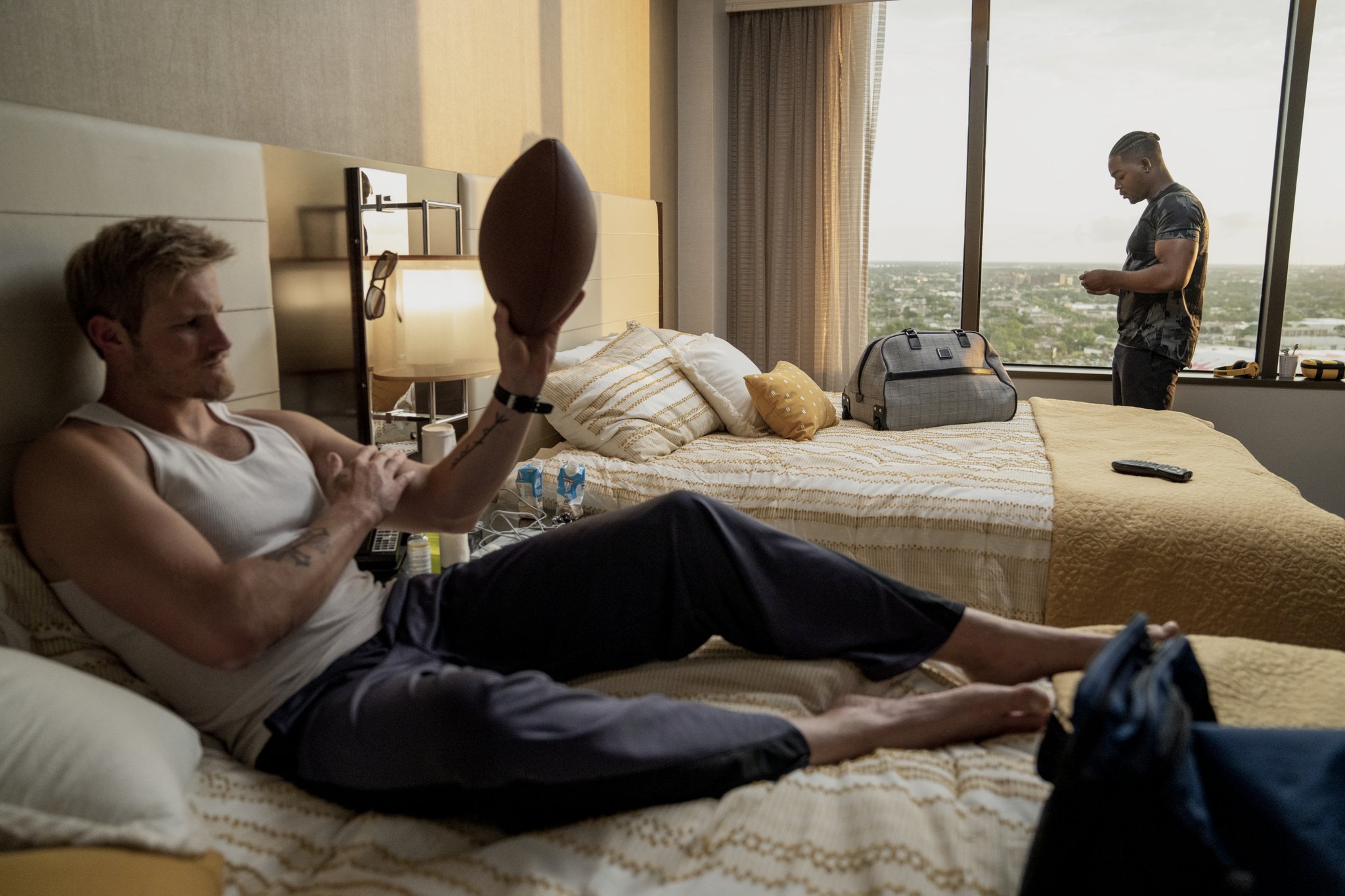 Few film genres are as conservative as that of the sports film. Not only does it stick to formula much more than most genres, but so many of the films are about the upholding of tradition, nostalgia for a better and simpler plan, and idolization of all-knowing older male coaches. Even a movie like Moneyball is ultimately about a protagonist who’s a team executive, treated like a hero because he built a winning team with cheap players.

And that’s why National Champions is so surprising. It’s a movie set at a college sports championship game, but it’s not about the game, but rather about a labor action by a group of student-athletes. In fact, we don’t even say the game, and the stakes of the movie have nothing to do with the outcome of the game.

Yes, the movie is clumsy in many ways large and small, but it’s also quite a radical film, joining Steven Soderbergh’s High Flying Bird as the major works of an emerging Leftist Sports Movie canon.

The early parts of the film resemble a caper movie. Days before the college football championship games, two-star players (Stephan James and Alexander Ludwig) slip out of the team hotel and launch a boycott of the game, demanding that the business model of college sports be upended, in favor of college athletes being paid.

This of course sets off a firestorm, including a shark-like lawyer (Uzo Aduba) who’s digging up dirt and applying pressure, and various levels of gamesmanship. Most of the affected bigwigs are played by respected character actors like Tim Blake Nelson (as an oily booster), David Koechner (as the head of the conference), and, most notably, J.K. Simmons as the players’ coach.

There are various nods to real life, including the case of Colin Kaepernick, and the Virginia bowling alley brawl that landed Allen Iverson in jail. Several NFL players and media figures appear in the film; veteran NFL safety Malcolm Jenkins, who in real life remains an active player, is in this universe a color commentator on the national championship game. Jenkins himself was a participant in the NFL’s anthem protests.

Other things aren’t so real; the university is called “Missouri,” but it’s not the actual University of Missouri, with none of the real logos or nicknames.

The film is directed by Ric Roman Waugh, and it’s’ better than most of his previous work, such as Snitch, Angel Has Fallen, and Greenland. National Champions is actually based on a play, by Adam Mervis.

Sure, there are some things that don’t quite work. The actors playing the athletes are all noticeably too old to plausibly be college students. The score is treacly and annoying, and the movie for some weird reason begins with the characters reciting the Ezekiel 25:17 speech from Pulp Fiction. A big speech by Simmons seems lifted directly from Al Pacino’s “inches” speech in Any Given Sunday, and the stuff with Kristen Chenowith as Simmons’ cheating wife is deeply silly.

At one point, there’s a leak of confidential medical records and no mention that this is almost certainly illegal. And Timothy Olyphant has a weird, weird role that seems more like something that belongs in a Cold War spy movie than this particular movie.

But the movie has its heart in the right place and is the sort of film that would have been unthinkable as recently as ten years ago. However much audience appetite there is for a movie about sports labor issues, especially up against a baseball lockout, is another question entirely.

The Films of Ridley Scott, Ranked From Worst to Best