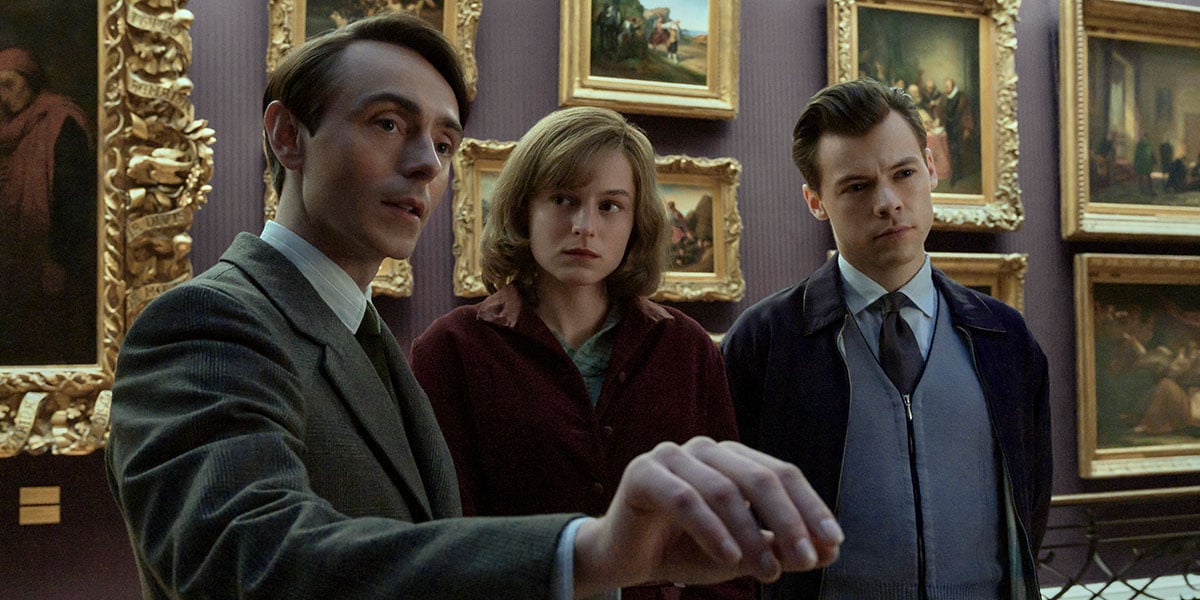 Michael Grandage’s swooning My Policeman is a rugged delight. Its delicate and tender portrait of three people caught in the embers of a passionate and catastrophic romance is a wholly moving experience that evocatively taps into a solemn, plaintive, and wistful current of heartfelt sincerity—even though it doesn’t reach its full potential.

Brimming with an indelible warmth, the film’s cinematic design is constructed with the gentlest approach in mind, tenderly traipsing over the inherent fears, trepidations, and ultimate concessions linked to an uncomfortable truth and a clandestine desire— both of which collide and fold onto one another in a beautifully poignant manner.

The story centers on Tom (Harry Styles), a young police officer, and Marion (Emma Corrin), a schoolteacher, who both do what’s expected of them in 1950s Britain, as they get married soon after sparking a charming relationship. Yet, their connection has always been underpinned by a third voice, Patrick (David Dawson), a knowledgeable museum curator who quickly becomes the couple’s best friend. But under the surface, Patrick and Tom share a hidden connection, grounded in a desire to explore their true sexualities.

Torn between his innate passion for Patrick and his love for Marion, an intricate love triangle forms and gives way to life-altering confrontations. As the film cuts to and from their older selves (Linus Roache, Gina McKee, and Rupert Everett) the film pieces together a decades-long emotional journey around personal acceptance.

With such an impassioned romance at the center of it, it’s surprising that the writing and the performances aren’t its strongest feature. Instead, its most potent weapon isn’t Harry Styles, but its gorgeous and euphoric cinematography. Grandage distinctly arms his adaptation with a haunting, natural lens that settles into a serene, yet enrapturing stride.

Ben Davis’ photography movingly conveys the aching dichotomy between its two separate periods, as its vibrant colour palette captures both the pain of wasted potential through washed-out gradients and the vitality of a budding affair with lush, vibrant hues. Not only have these characters changed but so has the world, and its graceful approach to the imagery wholeheartedly conveys this.

With such a noted emphasis on visual design, the film is able to intensely explore the tragic endeavour of falling in love. This is most evidently seen in its subtle and poignant approach to its depiction of gay sex, as these sequences are fundamentally ingrained with tenderness and tact—creating space for intimate moments that are rarely, if ever, given their due on screen.

The masterful visuals, in tandem with its stirring soundscape of aching strings and pianos, make for a cathartic experience that not only highlights the tragedy of this romance, but the sheer magnitude of queer love stories lost to time.

While My Policeman’s approach to sound and image is unequivocally its greatest strength, its three leads (who range in quality) perfectly embody the film’s tragic, melancholic aura. Emma Corrin’s multi-faceted performance exquisitely navigates the pain of being in a relationship devoid of intimacy as she comes to terms with her husband’s true nature and desires. Yet, the film’s standout is David Dawson, as his delicate and measured delivery brings Patrick’s psychological insights to life. He exudes an inherent yearning that is utterly piercing. His interplay with Style’s Tom is wholly rapturous and authentic, as it epitomizes the all-consuming nature of a love forced to languish in the shadows.

Style’s performance is clearly the weakest, failing to tap into the same nuances as his counterparts. Yet, while he isn’t revelatory, he doesn’t need to be, as he provides a serviceable touch that doesn’t detract from what the film does exceptionally well. Even though he’s billed as the star, his turn as the tortured lead comes across as complimentary, rather than distracting. Roache, McKee, and Everett put forward convincing turns as the older, and more broken versions, doing the best with what little they’re given.

That is arguably the film’s greatest shortcoming, as it fails to balance the past and present in a convincing way. While the heartbreaking trajectory of their lives in the 1950s is intricate and detailed, that same level of attention wasn’t applied to its aftermath, and it raises more questions than answers—with an air of uncertainty still present during its final moments of reconciliation.

Despite its shortcomings, My Policeman is an enthralling romance that sheds light on the all-encompassing nature of hidden desires, and the importance of reconciling with your true self. Midway through the film, Patrick tells Tom— “you have to let passion take hold of you”, and while the film won’t win Harry Styles any awards, it does magnificently capture the sheer breadth and depth of that sentiment, for better and for worse.